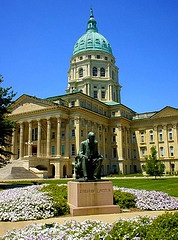 In an overwhelming vote of support, the Kansas Legislature Tuesday passed a media shield bill that, if signed by Governor Mark Parkinson (D), will protect reporters in most circumstances from having to disclose the identity of anonymous sources and other information obtained in the newsgathering process. The Kansas bill is both remarkably progressive for its time and offers reporters generous protection.

In addition to defending traditional news organizations, the bill extends its shield to “online journal[s]” that are engaged in “the regular business of newsgathering and disseminating news or information to the public.”  While a Kansas court will have to authoritatively define the term “online journal,” the bill seems to cover bloggers and other non-traditional journalists so long as they engage in “regular” journalism.  This question, whether bloggers should be protected by shield laws, has provoked vigorous debate surrounding the proposed federal shield law.  The Kansas bill offers protection based primarily on whether an individual engages in journalism, not whether he or she is a professional journalist.

Also, as noted by the Student Press Law Center (SPLC), the bill may well cover student journalists alongside of their elder counterparts.  The bill states that a “journalist” is a “publisher, editor, reporter or other person employed by" a news outlet.  The bill does not require that a covered individual be a professional reporter.  As Frank LoMonte, executive director of the SPLC said, "The Kansas [bill] looks protective of student journalists because coverage [under the bill] depends on functioning regularly as a journalist, not on who you work for or how you're paid."

In addition, Kansas legislators provided reporters with strong coverage in terms of what can be shielded from legal process.  The proposed bill provides a qualified privilege against identifying anonymous sources or disclosing "any previously undisclosed information" obtained in the newsgathering process.  The bill defines "information" broadly as:

While offering this broad protection, the bill also ensures that state prosecutors and civil litigants are able to obtain information from journalists when absolutely necessary.  The bill sets out a three-part test that parties desiring information must meet. This three-part test not only requires “the party seeking to compel disclosure” to demonstrate a pressing need for the requested information, but also permits a judge to engage in a balancing of First Amendment-type values that weigh in favor of protecting a journalist’s ability to keep confidential information and sources.

Beyond providing these broad protections, the bill backs them up with practical bite. If someone demands information from a reporter without a “reasonable basis” for doing so, the demanding party could be forced to pay the journalist’s attorney's fees.  This provision, in particular, provides a disincentive to demand information obtained while a reporter was “acting as a journalist” unless it is truly necessary to an ongoing legal battle.

While the Kansas Press Association has worked for years to get this type of legislation passed, the current bill is most directly the result of a unexpected hero:  former Dodge City Daily Globe reporter Claire O’Brien.

The O’Brien saga started in October 2009 when she interviewed a murder suspect, Sam Bonilla, who was headed for trial.  In December of that year Ford County Attorney Terry Malone subpoenaed O'Brien, demanding that she share information from her interview notes, as well as information about statements she had attributed to anonymous sources.  At that point, Bonilla was set to appear before a state inquisition, similar to a Grand Jury proceeding.

O’Brien, backed by Globe attorneys, resisted the subpoena as best they could.  Nonetheless, on February 2, 2010, the Kansas Supreme Court ruled against O’Brien, forcing her to testify in Bonilla’s trial (the inquisition had resulted in the state pressing charges).  However, on O’Brien’s court date, the reporter simply did not show up—an ill-advised move to say the least.  In one interview, Lucy Dalglish, executive director of the Reporters Committee for Freedom of the Press (RCFP), said of this move: “Even if you’re not going to answer questions, you still have to go to court.”   As a result of O’Brien’s action, she was hit with a $1,000-per-day fine until she appeared to testify.  And that’s when it all went downhill.

After O’Brien missed her court date, the reporter lashed out at the company that had been defending her.  O’Brien stated that she felt “profoundly betrayed” that her attorneys, and the Daily Globe’s parent company, had not afforded her the “dignity of representation.”  O’Brien also ranted on a RCFP comment board (the post was time-stamped “3:04 am”), accusing the organization of exposing her to “retaliation” and demeaning the RCFP’s efforts.

When the dust had settled, O’Brien, represented by a private attorney, talked to prosecutors.   She also lost her job.  In March, the Daily Globe fired O’Brien.  Although GateHouse Media Kansas, the Daily Globe’s publisher, did not publicly release an explanation for the reporter’s termination, O’Brien said that she was let go in “retaliation” for the comments she had made after failing to appear in court.

As one commentator put it, the O’Brien saga was, well, “weird.”  But, from the ashes of this story came something that had been years in the making—a shield law for Kansas’s reporters, and a good one at that.  While few want to see the O’Brien case unfold a second time, the media attention surrounding it did highlight the need for a shield law.

If Governor Parkinson signs the bill, Kansas will join a majority of other states that afford legal protections to journalists.

In related news, the Maryland Senate is currently in the midst of approving a bill that would update the state’s shield law to expressly include protections for some student journalists.  The move was prompted by a controversy that erupted when an Illinois prosecutor subpoenaed students at Northwestern University’s Medill School of Journalism.  The prosecutor demanded information obtained in the course of news reporting, as well as other documents.