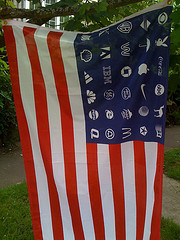 Earlier this week the CMLP (under its new name, the Digital Media Law Project) sought leave to file an amicus brief in Boston Municipal Court in the case of Commonwealth v. Busa, which concerns a prosecution under Massachusetts's anti-counterfeiting law, M.G.L. ch. 266 § 147 ("Section 147"). I wanted to share a little bit about the statute, and why we decided to take the unusual step of appearing at the trial court level to urge the court to void the statute.

Section 147, at a quick glance, may look like a traditional trademark regulation. The statute punishes whoever willfully "manufactures, uses, displays, advertises, distributes, offers for sale, sells or possesses with intent to sell or distribute any item or services bearing or identified by a counterfeit mark." So far, highly unremarkable.

The statute deviates from mainstream trademark law, however, in its definition of "counterfeit mark," which includes "any unauthorized reproduction or copy of intellectual property." "Intellectual property," in turn, is defined as "any trademark, service mark, trade name, label, term, device, design or word" that is used by a person and is registered in a state trademark database or the USPTO Principal Register. Notably absent is the central test of trademark infringement: that the use is likely to cause confusion as to the origin or sponsorship of goods or services.

Without that, we have the criminalization of any manufacture, use, display, distribution, or sale of any item or service bearing a word, image, design, or other trademark that another person registered to identify goods or services, without such person's permission.  The Commonwealth need not prove that a consumer was confused or deceived, or that there was any form of source dilution, or even that the use bore any relationship to the types of goods or services relevant to the underlying trademark owner. No exceptions are made in the statute, not even for "non-trademark" uses, such as expressive uses or news reporting.

This is hard to appreciate in the abstract, so let me illustrate. The Boston Globe ran a story today entitled "Harvard Alumni Association apologizes for Unabomber listing." (The full story online is behind a paywall, but the headline suffices for this point.) HARVARD ALUMNI ASSOCIATION is a registered wordmark of Harvard College (USPTO Registration No. 3,106,854). By printing this title in the Globe today the newspaper displayed this mark, without authorization, on an "item or service." This meets the elements of Section 147.

And it gets worse: Because the use doesn't have to even refer to the original trademark, the statute criminalizes the act of displaying a word that by pure coincidence happens to be registered. For example, printing "Boston," in any context, would appear to violate Section 147, as at least nine different companies have registered the wordmark BOSTON for some form of good or service. This is what happens when you separate trademark law from its theoretical underpinnings – you get absurd results.

As we argue in our brief, this blanket criminalization is unconstitutionally overbroad under the First Amendment, because it criminalizes a wide array of constitutionally protected speech. Indeed, we are not the first to argue as such. Pennsylvania passed a highly similar law around the same time that Massachusetts passed its law, and three years ago the Supreme Court of Pennsylvania found the law unconstitutionally overbroad in Commonwealth v. Omar. In striking their version of the statute, the court noted:

When the relevant definitions are inserted into the definition of the offense, the statute criminalizes the use of any items bearing an unauthorized reproduction of terms or words used by a person to identify that person's goods or services. . . . As highlighted by the trial court, the statute, therefore, unconstitutionally prohibits protected speech, including the use of words on a sign praising or protesting any entity with a trademarked name, including Penn State. Taken to the extreme, even our use of the words "Nike" and "Penn State" in this opinion without the permission of the company or the university would fall under the current definition of a counterfeit mark. Clearly, the statute prohibits a substantial amount of protected speech.

The effect of this is a perpetual cloud of criminality around people who routinely publish content which references companies by their trade names, which would include every news organization in the Commonwealth. The police could choose to enforce Section 147 at any time, and potentially for arbitrary or retaliatory reasons. (This seems like a good time to mention that the law includes a provision mandating the impoundment of items "used in connection" with the crime – which could certainly include any computer servers or printing presses used by said news organizations.) This threat of prosecution, and the chilling effect it creates, is precisely why the courts are empowered to void overbroad laws under the First Amendment.

There is another, independent reason for invalidating Section 147. Distilled to its elements, the statute punishes any unauthorized manufacture, display, or distribution of certain words, images, or designs. True, the statute is focused on words, etc., that happen to be registered trademarks, but not on use as a trademark. Really, Section 147 isn't a trademark law at all; it's a copyright law. It prevents the public from copying certain words and images without permission. And copyright is an area of law where Congress does not allow concurrent state and federal regulation. The Copyright Act expressly states that  "all legal or equitable rights that are equivalent to any of the exclusive rights within the general scope of copyright . . . in works of authorship that are fixed in a tangible medium of expression and come within the subject matter of copyright . . . are governed exclusively by this title." Here we have the same general scope of rights (reproduction, display, and distribution, without any extra elements), with regard to some of the same sets of subject matter (words, images, and designs).

While it is clear that Massachusetts is using this law, to date Section 147 seems to be evading any meaningful judicial review. Westlaw only turns up one reported decision at an appeals level that cites the statute (Commonwealth v. Pierre, 71 Mass. App. Ct. 58 (2008)) and that case is entirely focused on unrelated Fourth Amendment issues. It is at the trial court level where the statute appears to be employed with some frequency, so it is at the trial court level that we decided to raise these issues as an amicus curiae.

In the particular case at bar, a man was arrested about a year ago for selling anti-Vancouver Canucks t-shirts outside of the Garden during the Stanley Cup Finals. The t-shirt had the Canucks logo with a circle-and-line through it (like this anti-Canucks blog post illustrates). On the back bore the words "Boston Fights, Vancouver Bites," a reference back to Game 1 of the finals, when Canucks forward Alex Burrows bit Bruins center Patrice Bergeron. Examined under traditional trademark law, such a use would be allowed, because it would be pretty hard to argue that people would believe that the Canucks would have made or sponsored such a t-shirt. And under copyright such a critical use would likely be found to be a fair use. (This assumes that the Canucks logo is still protected under copyright; the logo dates back to the era of mandatory "publication with notice" so it may be in the public domain if such notice was omitted.)

This sort of expression is rightly protected under the First Amendment. And yet the police were able to arrest this man, and now the Commonwealth seeks to prosecute him for "counterfeiting." This is exactly what happens when an overbroad law is allowed to stand: Those that were never the intended target of the law get swept up in its over-enforcement. To borrow words from a recent Supreme Court overbreadth case, "[t]his prosecution is itself evidence of the danger in putting faith in government representations of prosecutorial restraint." It feels rather crazy to have to argue for a Bostonian's constitutional right to say that the Vancouver Canucks suck, and yet here we are.

For more on our argument, please feel free to read our brief. A big, big thank you to Kit Walsh, Dalia Topelson, Chris Bavitz, and Phil Malone over at the Cyberlaw Clinic for their input and assistance in drafting the brief, as well as to clinical students Michael Adelman and Brandon Hammer.

Andy Sellars is a staff attorney with the CMLP and a fellow at the Berkman Center for Internet & Society. His last name is also a registered trademark for absorbent synthetic materials, making the display of the name a violation of Section 147. See USPTO Registration No. 2,329,549.

(Image of the AdBusters Corporate America Flag courtesy of Flickr user ixmati, licensed under a Creative Commons Attribution Share-Alike 2.0 unported license. As we note in our brief, display of this flag in Massachusetts is a crime under Section 147.)