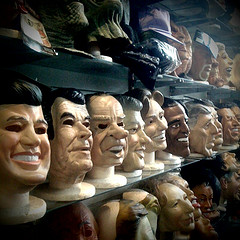 Arizona State Representative Michelle Ugenti (R-Scottsdale) introduced Arizona House Bill 2004 in December, which would amend Arizona’s criminal code and make it a class 5 felony to impersonate somebody online, including, specifically, on a social networking site. A class 5 felony carries in Arizona a presumptive sentence of a year and a half imprisonment. Rep. Ugenti was quoted saying that she was inspired to propose the bill after one of her constituents approached her to tell her about being harassed on Facebook and other sites, but she did not elaborate further.

Indeed, cyberbullying is a rampant issue, and it may lead to serious physical and emotional harm (and even death, as in the sad case of Megan Meier). There is a legitimate state interest in preventing or limiting such harm. But people engage in online impersonation for a whole mix of reasons, and one could easily see a public figure threatening to use such a law against an account that was created for completely laudable ends, such as criticism and comment.

It's worth noting that Rep. Ugenti may have personal reasons for proposing this law. Rep. Ugenti has inspired fake Twitter accounts, including @RubbingUGently, which started publishing last year to comment on a crude joke made by Michelle Ugenti sotto voce (but with microphones open) while chairing a committee meeting last February. I will let the readers discover it by themselves (see the video of the meeting at 2:14:30). Probably riding the publicity wave created by the introduction of HB 2004, another Michelle Ugenti fake Twitter account, @RepMUgenti, was recently created.

According to the Arizona bill, a person commits online impersonation if she would:

without obtaining the other’s person consent and with the intent to harm, defraud, intimidate or threaten any person, uses the name or persona of another person to . . . (1) create a web page on a commercial social networking site or other Internet website; (2) post or send one or more messages [on these sites].

Would a prosecution against accounts like @RepMUgenti and @RubbingUGently be successful under this law?

It does not seem that whoever started these accounts had obtained Rep. Ugenti’s consent, so we can move on quickly to the other elements.

Did the accounts use Rep. Ugenti's "name or persona"? It ultimately will depend on how the Arizona courts interpret those words.

The owner of the @RubbingUGently account posts under the name "Michelle." "Michelle @RubbingUGently" is close to Michelle Ugenti’s name, but it is not her actual name, so that alone might not be enough. However, the avatar of @RubbingUGently is a picture of a brunette with exaggeratedly big red lips, wearing a blue dress similar to the one worn by Representative Ugenti when she made her joke. The user also claims to be from Scottsdale, just like Rep. Ugenti, and the use of "Lawmaker/Babymaker" in the profile alludes to Rep. Ugenti as a legislator and as a mother. The profile also alludes to her political party affiliation (GOP), and to the infamous joke (“Right-hand Aficionado”). We don't know how Arizona means to define "name" or "likeness," but at first pass this would seem to fit the bill.

No matter how a "name" is defined, the creator of @RepMUgenti will almost certainly be seen to have been using the name. The account name is very close, and the user is posting under the name "Michelle Ugenti." Furthermore, the @RepMUgenti avatar is a real photograph of Rep. Ugenti, and is thus clearly using her persona.

HB 2004 would incriminate impersonating someone online with the intent to harm, defraud, intimidate or threaten any person. It is closely modeled after Section 33.07 of the Texas Penal Code, which came into effect in 2011, and it shares the Texas law's faults. While one could understand what it means to "defraud" or "threaten" someone by reference to other laws, neither of these two texts limit the broad term "harm," or define exactly what "intimidating" a person means.

The definition of these terms is, however, subject to constitutional restrictions. If the law is interpreted in an overbroad manner there is a risk that it may chill free expression. As the Supreme Court stated in Gooding v. Wilson, "persons whose expression is constitutionally protected may well refrain from exercising their rights for fear of criminal sanctions provided by a statute susceptible of application to protected expression."

There is a particular concern with HB 2004 that it would be applied to constitutionally protected parodies or caricatures of public officials and figures. Protection for parody, even crude parody that causes emotional injury, is clearly within the protection of the First Amendment.  In the 1908s, the Reverend Jerry Falwell sued Hustler magazine for infliction of emotional distress over a parody advertisement featuring him as having had his “first time” with his mother while drunk, and after trial he was awarded a significant amount of damages. The Supreme Court, however, reversed the judgment in 1988 in Hustler Magazine, Inc. v. Falwell, reasoning that the First Amendment prohibits damage awards based upon a caricature or parody of a public figure that might inflict emotional harm but cannot be interpreted as conveying literal fact.

If Jerry Falwell, still remembered for his outrageous statements, were still alive, there is no doubt that fake Twitter accounts impersonating him would be created to comment on his opinions. If HB 2004 were interpreted broadly enough to reach clearly parodic impersonations, it would be unconstitutional.

On the other hand, if the statute were limited to categories of speech outside of First Amendment protection, such as actual fraud (the obtaining of something of value from another by inducing the other to rely upon false representations of fact), "true threats" (defined in Virginia v. Black as "statements where the speaker means to communicate a serious expression of an intent to commit an act of unlawful violence to a particular individual or group of individuals"), "fighting words" (defined in Chaplinsky v. New Hampshire as words "which by their very utterance inflict injury or tend to incite an immediate breach of the peace"), or defamation (the publication of false and damaging allegations of fact about an individual with negligence or actual malice), then it might survive constitutional scrutiny but be unlikely to reach the @RubbingUGently and @RepMUgenti accounts.

It does not appear that HB 2004 could constitutionally apply to the two parody accounts about Rep. Ugenti.

It would be much simpler to amend HB 2004 before its passage rather than hope that the courts solve any constitutional issues. If it appears that the statute is actually intended to reach parodies and other protected speech, a court, bound to follow the intent of the legislature, is likely to strike the statute entirely as unconstitutionally overbroad rather than impose a judicial construction that is inconsistent with legislative intent.

Such a fix might be relatively simple. For example, California's online impersonation statute, California Penal Code section 528.5, only incriminates impersonating someone online "credibly." Although the term "credibly" is itself vague, this at least indicates an intent to reach only situations where impersonation is used to convey false allegations of damaging fact. Adding this concept to the Arizona bill could go a long way toward protecting parodies on social media and other protected speech.