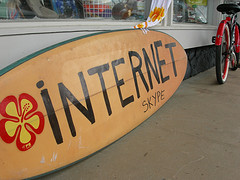 It is ridiculously easy to create an online forum.

Even just a few years ago, you had to have a fairly high level of technical savvy to put together such a thing - maybe some php or other coding skills, certainly a solid grip on html at the very least.   But now, thanks to the likes of Facebook, Google, and plenty of other online megacorporations, all it takes is a few mouse clicks.  And as a result, more government entities than ever are getting in on the action and creating forums -- in a technological sense -- for public debate.

But are they also creating public forums in a legal sense? In the physical world, when the government sets aside space as free for public use, it is not allowed to discriminate based on the viewpoints that members of the public might express in such spaces. But does that principle extend by analogy to virtual spaces hosted by government agencies?

That's the issue highlighted by a case filed just last week in federal court in Hawaii, in which Christopher Baker and Derek Scammon, as well as the Hawaii Defense Foundation (a pro-gun organization), are suing the Honolulu Police Department for constitutional violations after the HPD apparently removed the individual plaintiffs' comments from the Department's Facebook "fan" page.

According to the complaint, Baker and Scammon both made a series of posts this past January on the wall of the HPD's "official Facebook page," challenging the HPD on a variety of topics, including self-defense, illegal searches and seizures, and the like.  Although the HPD initially responded to the plaintiffs' posts on the forum, it eventually began deleting their posts as violations of the HPD's forum guidelines, and ultimately banned the pair from the page.  In response, Baker and Scammon sued, claiming that by barring them without explanation, the HPD was violating both their First Amendment right to free speech and their Fourteenth Amendment right to due process.

And appropriately enough, the case looks like it's going to boil down to a question of whether, in creating its forum on Facebook, the HPD also was creating a public forum in the legal sense. If it did, the HPD will be severely limited in the sorts of content management that it can perform in regard to deleting posts or banning commenters on the page without running afoul of core civil rights like those the plaintiffs are suing over.

The HPD's case isn't helped by some of the terminology that was chosen for the Facebook page.  As the complaint notes, the HPD itself refers to the page as "a forum open to the public." While the HPD claims that it "reserves the right to remove any post or comment on this site," under public forum doctrine the government does not have that right to reserve.

[T]he public forum doctrine presents significant challenges for the government when it restricts private speech on its websites. Not unlike private website operators, the government does not want its online forums to be used for discriminatory, violent, partisan, or otherwise inflammatory speech. Given the prevalence of profane, abusive, and irrelevant speech on the Internet, this is no idle concern for government officials who are tasked with maintaining online forums. But unlike private website operators, the government’s efforts to moderate public discourse must comport with the First Amendment and other constitutional limitations.

As David goes on to point out, "This has left the government with some unappealing alternatives when it evaluates whether to allow private speech on its websites: it can exclude private speech entirely, leave its online forums unmoderated, or create very narrow subject- and purpose-based categories in order to avoid claims of viewpoint discrimination." And the HPD's situation ironically illustrates the difference between private and public operators of forums in as much that Facebook as a private party can edit to its heart's content, while the government is forbidden to do so.

Thus, what was meant to be a tool of outreach and communication with the community could prove so unmanageable due to the threat of litigation that the Department's best option is to shut the site down completely. It's a tricky balance: the utility of forums like the HPDs versus the rights of the users to speak their minds in public "spaces" without interference from the government.  And it makes this case one to watch.