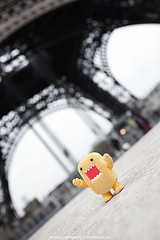 Last October I wrote about the rise in popularity among French Twitter users of the hashtag #unbonjuif ("a good jew"). In December we saw a growth in other offensive hashtags, including the homophobic #Simonfilsestgay, ("if my son is gay") or the xenophobic #SimaFilleRamèneUnNoir ("if my daughter brings a Black man home"). As with #unbonjuif, the "game" consisted of adding messages to these hashhags to create a "joke."

This time the hashtags prompted a response from the government. Najat Belkacem-Vallaud, France’s Minister of Women's Rights, reacted to these offensive tweets by writing an editorial published on December 28 in Le Monde under the title "Twitter must respect the values of the Republic." She described these tweets as being "morally reprehensible and illegal under our laws," and goes on by writing that:

[i]t is the honor of France to have progressively included in its criminal code punishment for incitement to hatred or violence against a person or group of persons because of their origin, membership or non-membership in an ethnic group, nation, or because of their sexual orientation or gender identity. These acts or remarks are punishable by law and the fact that they were made using a virtual channel does not make less punishable those who committed them and whose case made be tried by courts.

Belkacem-Vallaud's comments garnered international attention and prompted prominent responses, both in support and against her remarks. While such a regime of state-controlled censorship is unthinkable here in the United States, it serves as an additional data point in the control of hate speech in France. What follows is an analysis of the applicable French law.

Since 1972, article 24 of the July 29, 1881 French Freedom of the Press Law ("French Press Law") has incriminated provocation "to hatred or violence against a person or group of persons because of their gender, sexual orientation, gender identity or disability."

France has also ratified the Council of Europe Additional Protocol to the Convention on Cybercrime, concerning the criminalization of acts of a racist and xenophobic nature committed through computer systems, which article 5 obliges parties at the convention to adopt laws incriminating insulting individuals through a computer system because of their race, color of skin, ethnic origin or national or religious background.

Article 48-1 of the French Press Law allows non-profit organizations to sue the authors of xenophobic or anti-Semitic tweets, if they have been lawfully registered for at least five years from the date of the incident, and if their by-laws state that one of their goals is to fight racism, and to assist victims of discrimination because of their national, ethnic, racial or religious origins. Najat Belkacem-Vallaud announced in her editorial that, starting today, she would work with Twitter and such non-profit organizations to try to find a way to prevent such tweets. A meeting was originally scheduled to take place this week, but it has been indefinitely postponed, as Twitter's participation could not be confirmed.

Not all French law points to censorship of offensive speech, however. In addition to the French Press Law and the Additional Protocol to the Convention on Cybercrime, France has also ratified the European Convention of Human Rights (ECHR). Its article 10 protects freedom of speech, but its section 2 states that such right "may be subject to … formalities, conditions, restrictions or penalties as are prescribed by law and are necessary in a democratic society … for the prevention of disorder or crime, for the protection of health or morals, for the protection of the reputation or the rights of others."

According to the European Court of Human Rights, article 10 § 2 is not only applicable to "information" or "ideas" that are generally received or regarded as inoffensive or as a matter of indifference, but also to those that "offend, shock or disturb" (Hertel v. Switzerland § 46). Therefore, it can be argued that the ECHR would protect these offensive tweets, but French law incriminates incitation to hatred. How can these two objectives be reconciled?

The Cour de Cassation, France’s highest criminal and civil court, held on November 13, 2001 that criminalizing incitement to racial discrimination is compatible with article 10 of the ECHR, because a "pressing social need" ("besoin social impérieux") would authorize limiting freedom of speech. That expression was borrowed from the jurisprudence of the European Court of Human Rights, which refers to this concept when analyzing what is "necessary" within the meaning of Article 10 § 2.

The Grand Chamber of the Strasbourg Court quoted in 2012 the Chamber judgment in the same case which explained that "[t]he adjective ‘necessary,’ within the meaning of Article 10 § 2, implies the existence of a ‘pressing social need.'" "The Contracting States have a certain margin of appreciation in assessing whether such a need exists, but it goes hand in hand with European supervision, embracing both the legislation and the decisions applying it, even those given by an independent court. The Court is therefore empowered to give the final ruling on whether a ‘restriction’ is reconcilable with freedom of expression as protected by Article 10." (Mouvement Raëlien Suisse v. Switzerland at 48).

Beyond this "pressing social need," as noted above, the ECHR also contemplates free speech exceptions "for the protection of health or morals." Najat Belkacem-Vallaud described the tweets as being "morally reprehensible," seemingly invoking this provision in Article 10 § 2.

Morality, however, provides uncertain grounds to base a speech restriction. The European Court of Justice noted about Article 10 § 2 in the Handyside v. United Kingdom case that "it is not possible to find in the domestic law of the various Contracting States a uniform European conception of morals. The view taken by their respective laws of the requirements of morality varies from time to time and from place to place, especially in our era which is characterized by a rapid and far-reaching evolution of opinions on the subject." (Handyside at 48.) Therefore, while it is the French view of what constitutes morals which would be used when assessing the legality of restricting speech, the view of France of what are "morals" suffers from the same obscurity that the Handyside court explored with Europe-wide moral judgments.

It is true that France has a certain margin of interpretation in the Twitter case to assess whether limiting the freedom of speech of French Twitter users is compatible with its obligations as signatory of the European Convention of Human Rights. Nevertheless, the European Court would have the last word, and it is far from clear whether the ECHR would tolerate such a speech restriction.

Much has been made of the comparison between France's approach to free speech and that of the United States. Najat Belkacem-Vallaud, acknowledging this, wrote:

[o]ther countries in which Twitter is also available have a different concept of how to exercise freedom of expression and the protection of the dignity of the human person. We believe that each legal tradition must be respected, since it is part of human rights. This means that Twitter must find solutions so that messages sent from our territory, using our language and directed at our citizens do not clearly violate the principles we have set.

But France may have more in common with the United States when it comes to free speech than they initially thought. Here is one example:

Both the United States and France have ratified the United Nation’s International Convention on the Elimination of All Forms of Racial Discrimination. Article 4 of this Convention, signed in New York on March, 7 1966, provides that signatories must make all dissemination of ideas based on racial superiority or hatred, or incitement to racial discrimination, an offense punishable by law.

But perhaps more surprisingly, so did France. When ratifying the UN Convention, the French government declared that it interpreted its article 4 as not obliging the States Parties to enact anti-discrimination legislation incompatible with the freedoms of opinion and expression guaranteed by the Universal Declaration of Human Rights and article 5(viii) of the 1966 Convention. In other words, although it is important not to disregard the differences between these two systems, France may be striving to balance these issues at a level not appreciated in the current debate.

In her editorial, Najat Belkacem-Vallaudalso called upon the "fundamental values of the [French] Republic of liberty, equality and fraternity," invoking France’s motto. While one may understand how deleting homophobic and xenophobic tweets could contribute to equality and fraternity, it is more difficult to understand how the fundamental value of liberty (freedom) would be enhanced, unless one considers that the speech is harmful, and thus sets the limit of freedom of speech. The Minister makes this argument in her editorial, writing that "[t]he freely accessible messages maintained on Twitter could pose a danger to young homosexuals," and she cites homophobic violence as one of the premier causes of suicide among French teenagers.

However, the tweets at stake, while reflecting the stupidity and small-mindedness of their authors, are less likely to incite homophobic violence against a specific individual. It is more likely that homophobic or xenophobic tweets directed at a particular individual would lead to homophobic violence or suicide, such as in the case of Tyler Clementi’s suicide in the United States. And in the case of homophobic tweets directed at an individual, free speech may give way to the higher need of immediate protection of the welfare of an individual, in the US just as in France.

Instead of censoring these tweets, the French government should interpret them as an urgent sign for the need to better educate the public, especially young people, about the value of diversity and open-mindedness. For example, France may soon allow persons from the same sex to get married and to adopt children, which has sparked debate and public outcry. The French government’s mission should be to continue to put such inclusive policies into place, and to promote diversity in a society as open as possible. This is where the “honor of France” must be, not in censoring speech.

(Photo of Domo at the Eiffel Tower by Flickr user Yon Garin, and published under a Creative Commons CC-BY-NC-ND 2.0 license.)