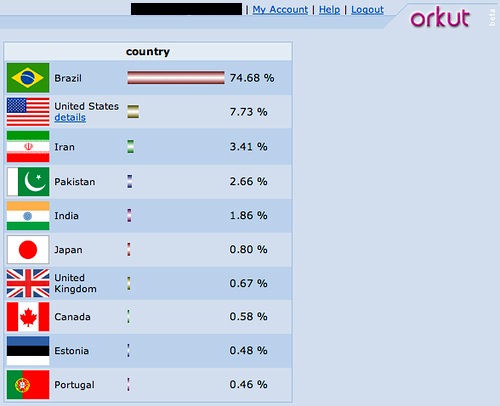 Techdirt first drew our attention to Google's recent legal troubles in Brazil over its Orkut social networking site (which, as Mike Masnick says, is—mysteriously—only popular in Brazil). The case has gotten a lot less attention than the whole Italy kerfuffle, perhaps because it lacks the drama of a court holding executives personally accountable. But, the Brazilian case presents some obvious parallels with the Italian convictions, and it further underscores the importance of strong legal protections for intermediaries in preserving freedom expression and promoting innovation online.

Press accounts report that, on Tuesday, a Brazilian court fined Google for failing to block Orkut pages containing dirty jokes that "offended" two teenagers. The court imposed a $2700 fine for each day that the offending pages remained up and ordered Google to stop similar material from being posted in the future.  Ironically, the court apparently cited Google's censorship of material in China as proof that it was feasible to do so in Brazil, leaving out Google's showdown with China and its ultimate decision to pull out of China altogether.

Masnick asks the questions that I'm sure are on the minds of many of our readers: "Have they no safe harbors in Brazil? Do courts really not understand why it makes no sense to blame the service provider for actions of their users?" I wanted to get a better understanding of the case and the Brazilian laws involved, so I sent out an inquiry through Berkman Fellow Carolina Rossini, who kindly connected me with a number of very smart and helpful Brazilian lawyers. Here's what I learned:

Ivar Hartmann, an LL.M. in Constitutional Law and a cyberlaw researcher in Brazil, told me that the district attorney's office for the state of Rondônia in northern Brazil filed the case against Google. Although brought by a government authority, the case is not a criminal matter, but rather a special type of civil suit called a "Public Civil Action," which works similarly to a U.S. class action in terms of the plurality of injured parties. The district attorney's office sought "collective moral damages" and asked Google to "take down the two Orkut communities, identify the creators of such communities, [identify] all of their members . . . and [the] people who posted messages . . . considered offensive to the two teenagers affected."  And, as noted above, the authorities sought and obtained an order to "prevent the future creation of new communities with similar content."

It sounds like the Orkut communities at issue in the case were created to share general gossip; they did not specifically target the two teenagers. Hartmann told me that he had not seen the content of the posts, but knew that at least three other Orkut communities with the same name—something like "Pepper Gossip"—have sprung up, as well as another community that advocates against such gossip groups.

Brazil's Superior Justice Court, the country's highest court for non-constitutional issues, issued the recent decision, which affirmed the state court's ruling imposing the fine. Hartmann says that the judge who wrote the opinion is a respected jurist in Brazil, and that while his decision is debatable, he "would probably not be seen as irresponsible or lacking in good sense," at least given the "general lack of good understanding, by all judges, of how cyberspace freedom of expression works (or should work)." He points out more generally that, in Brazil, "the balance between freedom of expression and protection against moral injury is slightly more favorable to the latter than in the U.S."

That said, Hartmann personally thinks "such cases should be decided in favor of Google and freedom of expression in general, as judges in Brazil don’t seem to have yet found the proper balance between the protection of freedom of expression and that of human dignity and privacy in cyberspace."

Marcel Leonardi, a Brazilian attorney and law professor at FGV-SP (here's his blog), shared with me a number of insights about intermediary liability in Brazil. Leonardi confirms that Brazilian law does not provide any immunity or safe harbor for ISPs or online service providers regarding third-party content. He says that discussion on the topic is afoot because of a number of court decisions like this recent one, and that there are two different trains of thought on the issue:

Needless to say, the first of these two approaches sounds pretty hair-raising for intermediaries. The second is better for speech and innovation, but obviously less robust than U.S.-style Section 230 protection. One serious problem with the notice-and-takedown approach, Leonardi points out, is that it puts the burden on the intermediary to determine what is and what is not illegal content. Another, I might add, is that it incentivizes intermediaries to adopt a "take down first and ask questions later" approach, and generally puts the burden of challenging the takedown on users who have little in the way of legal expertise and economic resources.

Leonardi captures well what's at stake for Brazil and other countries mulling the decision to adopt legal protections for online intermediaries:

As this case particularly illustrates, safe harbors for ISPs are sorely needed in Brazil, since some judges still cling to the idea that every online harm must have redress and end up holding the ISP liable even when it could not possibly prevent the harm. I find this notion particularly absurd, since this has serious implications for the growth of online services, innovation and tools available for the average user. Huge companies like Google can bear the costs of these lawsuits, but it is hard to imagine a new service springing up in such a hostile legal environment.

If anyone has something to add about the case or the legal climate for intermediaries in Brazil, please drop a note in the comments.