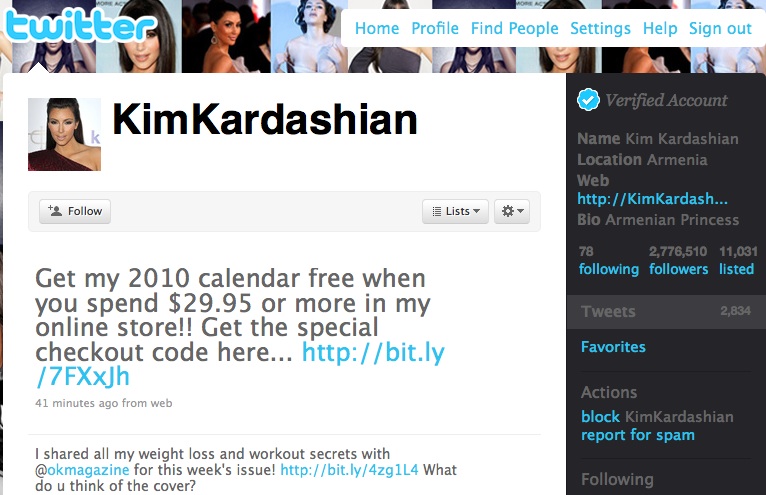 14(a). Dr. Siegal's Cookie Diet is falsely promoting that I'm on this diet. NOT TRUE! I would never do this unhealthy diet! I do QuickTrim!

14(b). If this Dr. Siegal is lying about me being on this diet, what else are they lying about? Not cool!

More than a month later, on December 11, 2009, Kardashian's legal team took aim at the hyperlink and sent a cease and desist letter to Dr. Siegel's company, which, according to the complaint, promptly removed the hyperlink despite (apparently) not having a legal obligation to do so.

On December 28th, 2009, Dr. Siegal and his company fired back by filing this suit, focusing the substance of the defamation claims on Kardashian's assertions that the cookie diet is "unhealthy" and "Dr. Siegal is a liar" (you'll note this is not what the second tweet said).  In addition to alleging that these two statements were defamatory and inaccurate, the complaint claims that Kardashian had a commercial motive to defame Dr. Siegal and his company because Kardashian has an endorsement relationship with a competing diet product, QuickTrim, which relationship was not disclosed in the tweets at issue.

The defamation claims could be challenging. As Wendy Davis of MediaPost notes:

Julie Hilden at FindLaw makes a similar point about the "unhealthy" comment. Plus, Dr. Siegal may well be a "public figure," at least when it comes to diet controversies, so he could have to show that Kardashian made the statements with actual malice—knowing or reckless disregard for the statements' truth or falsity—always a challenging endeavor.

Mike Masnick at Techdirt points out another interesting aspect of the case. According to one source, Kardashian's Twitter account, which has some 2.7 million followers, commands as much as $10,000 for product endorsement tweets.  Although the lawsuit doesn't specifically bring up the Federal Trade Commission's new product endorsement disclosure requirements, the fact pattern does raise the issue in a law-school-exam kind of way.

The FTC's new guidelines require bloggers, tweeters, and Facebook users to disclose "material connections" they have with companies whose products and services they endorse.  And if Kardashian is getting paid a hefty sum to endorse QuickTrim, her little quip—"I do QuickTrim!"—is precisely the sort of tweet for which the FTC wants to see disclosure. But the issue is totally academic because Dr. Siegal has no authority to enforce the FTC's guidelines, and Kardashian published her comments in October, before the guidelines became effective on December 1.  Still, this is an interesting example of the kind of high profile and lucrative social media endorsement the FTC might take an interest in.

If you're interested in this topic, be sure to check out CMLP's guide to Publishing Product or Service Endorsements, which is designed to help social media users understand and comply with the new requirements.  And if you just can't get enough cookies, you can monitor developments in the case through CMLP's database entry, Siegal v. Kardashian.

(David O'Brien is an attorney and former CMLP Legal Intern. David received his J.D. from Northeastern University School of Law in 2009.)