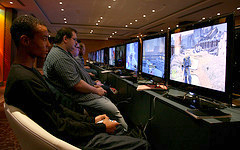 By definition, citizen journalism’s inherent difference from the traditional editorial process is the dispersion of responsibility for editorial choice.  Nonetheless, “trustiness” in journalism is a concept still heavily dependent on a reporter’s or editor’s reputation.  Is The New York Times trusted because it’s trustworthy?  Or is it trustworthy because it’s trusted?

The “Generated By Users” journalism blog recently reported the results of its reader poll, “Do you TRUST user generated content in news?”

[O]verall we like [user-generated content] but remain skeptical and need to know that it is trustworthy and adding value and perspective to reports. In an ever more connected world we can rely on UGC for immediate breaking news, but we want experienced journalists to sum up the day; if that requires using some UGC then we are fine with that, but it must be combined with original professional content.

Crowd-sourced citizen journalism attempts to bridge the gap between the historical (back to 2003 or so) understanding of “citizen journalism” and more recent efforts to create “virtual” news operations.  So, for example, in 2007 the US State Department’s blog America.gov wrote thoughtfully about the movement of established news organizations – the BBC, CNN, and Le Monde were favorably cited – to integrate video, blogging, and other raw reporting coverage of breaking news events into regular news reporting.  This trend had “becom[e] more of a dialogue between the providers and receivers of information, rather than an imposition of opinions and perspectives by an elite caste.”

Still, reporting is being collated (an unfair characterization?) by established media into seemingly traditional reporting.  Or, better yet, the explosion of number, variety, and depth of sources of news could make the producing of established reporting – digesting, analyzing, summarizing, and storytelling – that much better-sourced in the hands of writers, reporters, and editors who know how to bring it all together.

Crowd-sourced journalism is not without downsides.  From America.gov’s 2007 report:

On the negative side, the Internet has opened up extraordinary new possibilities for the widespread and sometimes dangerous manipulation of information, which is difficult, if not impossible, to stem.  This phenomenon will increasingly place a heavy responsibility on professional journalists to maintain high standards of fact-checking, honesty, and objectivity. Editors are already spending enormous amounts of time verifying and authenticating user-generated pictures and text, and this will only become a more time-consuming part of their jobs. Blog posts and comments require careful and regular scrutiny.

It is true that the explosion of sources of information – just like the avalanche of the raw information itself via wide, public availability of data – makes the jobs of journalists more complex, but that may not be all that much of a change.  Reporting has always required judgment calls by reporters on the quality of and proper weight to be given to sources.  The difference now is the number of sources of where information is coming from, and who has the ability to monitor how it is used.

If a structural problem for “citizen journalism” is an inability to generate consistency in quality – “editorial standards” – why not remedy that problem with some of the same technology that makes citizen journalism possible in the first place?

That is the approach of a number of projects discussed in a recent Columbia Journalism Review article, including Citizenside, Digital Journal, and NowPublic.  These sites use concepts from online gaming, including point tallies, rankings, and accompanying cash and non-cash rewards.

Borrowing these techniques from online gaming may prove advantageous to reward those who produce quality content.  A recent panel during Washington, D.C.’s “Digital Capital Week” (DC Week), on “The Future of Publishing,” featured Washington-based NewsIt, a self-described “mobile sharing network for creating and sharing news.”  Like its competitors discussed by CJR, NewsIt espouses the “gamification” of news, using math to rank “top citizen correspondents”.  The technology is built on an algorithm, and the distinguishing characteristic seems to be the strength (or weakness) of that particular algorithm to discern quality reporting.

Such an algorithm necessarily chooses different factors from the comparable calculi of competing services, and then weights those factors in whatever unique way chosen by its proponent.  The idea is terrific for setting up predictability for news sourcing, though it seems also vulnerable to its own being “gamed” (irony not intended) by users who can figure out the system.  Of course, that, too, is hardly news, as demonstrated by other algorithm-based services like Google Search, constantly tweaking its formula to stay ahead of the gamers.

Kate Tummarello, a Research and Social Media Intern with Mirsky & Company and a reporter at Roll Call/Congressional Quarterly, contributed to this post.

(Image of Space Marine Community Event in the UK courtesy of Flickr user THQ Insider licensed under a Creative Commons BY ND 2.0 license.)