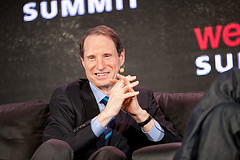 The Anti-Counterfeiting Trade Agreement (ACTA) is slowly inching its way towards implementation, but obstacles still remain. Now that the signing window for ACTA has been open for a while, let’s take a quick look at which countries have actually signed the agreement: United States, Australia, Canada, Japan, Morocco, New Zealand, Singapore, and South Korea.

Sounds like a pretty impressive roster. Should go deep into the playoffs.

But not so fast.  It looks like the US Congress is not too happy with the idea of the executive entering into a binding international agreement pertaining to intellectual property. As a reminder, the Constitution gives power over IP to the Legislature: “To promote the Progress of Science and useful Arts, by securing for limited Times to Authors and Inventors the exclusive Right to their respective Writings and Discoveries.”

Senator Ron Wyden (D) of Oregon sent a letter to President Obama seeking clarification that ACTA is not binding:

Although the [Office of the United States Trade Representative] insists that current U.S. law, and its application, conform to these standards, there are concerns that the agreement may work to restrain the U.S. from changing such rules and practices. As you know, the executive branch lacks constitutional authority to enter binding international agreements on matters under Congress's plenary powers, including the Article I powers to regulate foreign commerce and protect intellectual property. Yet, through ACTA and without your clarification, the USTR looks to be claiming the authority to do just that.

The US Trade Representative has previously claimed that it may unilaterally sign onto ACTA as an executive agreement, due to the USTR’s conclusion that the agreement would not require changes to US law. Senator Wyden takes issue with the USTR’s logic:

The statement by the USTR confuses the issue by conflating two separate stages of the process required for binding the U.S. to international agreements: entry and implementation. It may be possible for the U.S. to implement ACTA or any other trade agreement, once validly entered, without legislation if the agreement requires no change in U.S. law. But, regardless of whether the agreement requires changes in U.S. law, a point that is contested with respect to ACTA, the executive branch lacks constitutional authority to enter a binding international agreement covering issues delegated by the Constitution to Congress' authority, absent congressional approval. (emphasis in the original)

You might recall that Professors Jack Goldsmith and Lawrence Lessig (both of who are affiliated with the Berkman Center for Internet & Society, of which the CMLP is part) made a similar argument in a Washington Post op-ed in March 2010.  This sets up some interesting scenarios; the professors note the likelihood of either an immediate legal challenge to ACTA or at least some inter-branch snarling.

Ok, so things are murky in the US, but what about the EU? It didn’t sign on to ACTA yet but is the Union at least considering jumping on? At present, the European Parliament’s International Trade Committee can’t determine if ACTA is actually in line with EU legal provisions.

And . . . no word whether Mexico and Switzerland are any closer to signing.

The future of ACTA appears uncertain. I will try to keep you posted as countries sign on or jump off.

Andrew Moshirnia is a former CMLP intern. He also blogs at Just Enrichment.