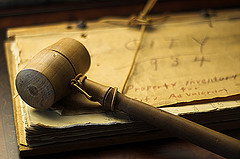 A few days ago, I attended oral arguments before the First Circuit Court of Appeals in the case of Joel Tenenbaum, a graduate student being sued by various record labels for sharing music files via a peer-to-peer service over the Internet (Sony v. Tenenbaum, docket available here).  I’ve already written up some of my thoughts about the possible outcome of Joel’s lawsuit over at my regular blog, Legally Sociable.

Here, I’d like to expand my analysis somewhat to cover Tenenbaum’s broader implications.  Many CMLP blog readers may be asking themselves, “So what?  What could swapping MP3’s on the Internet possibly have to do with the activities of citizen journalists?”

Under an ideal intellectual property regime, the answer would doubtless be “very little.”  Non-commercial use of music for personal entertainment bears little logical resemblance to news reporting, analysis, and advocacy.  One might reasonably imagine that IP law treats P2P music downloading differently from blogging about the news.

Unfortunately, in the real world, the law ends up treating blogging almost exactly like file sharing because both activities primarily fall within the purview of copyright law.  Moreover, 17 U.S.C. § 504(c) provides extremely flexible statutory penalties “as the court considers just.”

To be sure, a wide range of penalties is not necessarily a bad thing.  Consider the following two situations:

These cases are incredibly different.  Assuming that the particular facts compelled a finding of infringement in the second case, I still think that few reasonable observers would want to punish the blogger as heavily as the student.

Unfortunately, as recent arguments before the First Circuit in Tenenbaum make abundantly clear, there is no consensus about what is “just” in any particular copyright infringement case.  The Electronic Frontier Foundation’s amicus brief (PDF) highlights the troubling level of legal uncertainty:

In enacting Section 504 of the Copyright Act, Congress provided almost no guidance on how to award statutory damages upon a finding of infringement. Thus, every innovator and creator that relies on an untested theory of fair use or other copyright exemption must assume that if they lose, their damages will fall somewhere between $750 and $150,000 per work – a range of 200 to 1. [emphasis in the original]

That last part bears repeating:  a single copyright infringement subjects one to a ruinous $150,000 penalty.  Or a nettlesome $750 fine.  Or anything in between.

As the EFF puts it elsewhere in their brief, this radical indeterminacy creates a “tension between the range of statutory damages allowed under 17 U.S.C. § 504 and the requirements of constitutional due process”:

The promise of excessive statutory damage awards exempt from due process review and untethered from actual harm or reprehensibility has helped spur exploitive litigation by so-called “Copyright Trolls.”

Unfortunately, regular visitors here at the CMLP are all too familiar with these trolls.  The EFF specifically cites the activities of Righthaven (Wikipedia backgrounder) as a threat to free speech:

These mass lawsuits [by Righthaven and others] are part of a business model that depends in large part on plaintiffs’ ability to use the threat of statutory damages to pressure defendants into settling quickly. Without the assurances of a due process review requiring damages to have a reasonable relationship to actual harm and reprehensibility, defendants in these cases are forced to settle or else assume significant risks in fighting back, even where they have legitimate fair use or other defenses.

The CMLP documents various other examples in its Legal Threats Database, as does the website Chilling Effects (which, like the CMLP, is affiliated with Harvard's Berkman Center for Internet & Society).

We will probably not know the First Circuit’s decision in Tenenbaum for several months.  Sadly, it will probably be much longer before citizen journalists and bloggers know with any degree of certainty what magnitude of damages they risk for reporting on and analyzing the news.