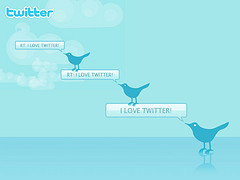 “RTs do not = endorsements.”

We’ve all seen it on Twitter bios, usually bios belonging to members of the media.

These kinds of disclaimers, disassociating the tweets from the people who retweet them, are common. The Twitter bio belonging to Brian Stelter of the New York Times (@brianstelter) notes, “RT & links aren’t endorsements.”

But for some, those disclaimers are not enough.  Last fall, the Associated Press introduced an updated social media policy for its reporters and editors.  As recently reported in Yahoo! News, the AP memo advised reporters and editors that “Retweets, like tweets, should not be written in a way that looks like you’re expressing a personal opinion on the issues of the day. A retweet with no comment of your own can easily be seen as a sign of approval of what you’re relaying.” The guidelines note, “[W]e can judiciously retweet opinionated material if we make clear we’re simply reporting it.”

Take, for instance, this example, where a user named @ProgressiveMich, whose bio indicates that he (or she) is against corporate money and for progressive politics for Michigan, retweeted “without comment” a tweet by conservative political commentator Dick Morris (@DickMorrisTweet) that said, “To gain the younger vote I think Republican candidates need to pick up Cain’s 9-9-9 plan.” In retweeting “without comment,” @ProgressiveMich might be saying (who knows?) that the content of the tweet is not worth commenting on. Rather than using “without comment” to avoid expressing an opinion, the retweet-er is in fact expressing an opinion.

This may be just the application of an old-school standard to a new medium. Just because you throw up a vanilla disclaimer of “nonendorsement” on your website or in the fine print, that may not cut it as effectively communicating nonendorsement.

In consumer protection law, this is the analogous problem with buried, “fine print” legal disclaimers, which have generated a whole rash of regulatory responses requiring “clear and conspicuous” disclosures.  So, for example, California’s recently amended security breach notification law requires disclosures be made via “conspicuous posting” of breach information “written in plain language”.

And perhaps most directly on point, the Federal Trade Commission (FTC) last year issued extensive rules requiring more prominent disclosures of commercial endorsements and affiliations by bloggers and other social media endorsers of commercial products.  The FTC’s blogger rules make clear the Commission’s view that the inadequacy of prior disclosures wasn’t limited to misleading or insufficient disclosure statements, but equally so the common practice of burying disclosures.

Big Pharma is quite familiar with this problem, which is why you find such seemingly awkward disclaimers (i.e. taking this drug may put you at risk of death!”) blithely stated by wistful lovers at the ends of Viagra and other sexual performance drug ads.  The US Food and Drug Administration requires “clear, conspicuous and neutral” presentation of risk information in pharmaceutical advertisements. And not leaving things to chance, the FDA has published highly detailed commentary on these practices, with examples such as this:

A seven-page sales ad devotes the first six pages to effectiveness claims, which are prominently presented with colorful graphics, abundant white space, and large, colorful headers. Three of these pages also include a footnote referring readers to “Important Information on page 7.” The seventh page summarizes some risk information from the PI in single-spaced paragraph format without headers or other presentation elements to emphasize to the reader that it is important risk information.  Such a presentation creates problems regarding the adequate presentation of risk. The important risk information about the drug should instead be integrated into the piece and presented with similar prominence to the effectiveness claims.

Does a catch-all “RTs and Links aren’t endorsements” (per Brian Stelter of The New York Times) really make the case?  In my post last year about the FTC blogger guidelines (“FTC Blogger Rules: Why Not Disclose Advertising?”), I noted that the guidelines limit disclosure requirements to cases where the sponsorship relationship is not “reasonably expected by the audience.”  And perhaps followers on Twitter should really know better than to assume a RT is an endorsement.  But in that sense, the AP’s guidelines are quite reasonable, especially for professional writers for whom care is assumed to have been taken with choice words.

Kate Tummarello, a Research and Social Media Intern with Mirsky & Company, contributed to this post.