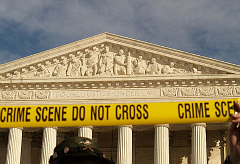 Say you're in law school, and your professor gives you the following hypothetical:

It's 1968. A man named Paul Robert Cohen is in the Los Angeles County Courthouse, in a public corridor. On Cohen is a jacket, and on the jacket are the words "Fuck the Draft." He takes the jacket off as he walks into the courtroom, but puts it back on when he's in the corridor again. When he does so the courthouse police arrest him and charge him with disturbing the peace. Cohen challenges the arrest as a violation of his First Amendment rights.

"How should the court rule?" your professor asks.

If you are especially studious you'll respond like this: The conviction for disturbing the peace clearly rests upon the speech that Cohen is conveying. He cannot be punished for his speech, as it does not fit into one of the narrow categories where we allow punishment of speech for its content (such as obscenity or defamation). The only way California can sustain its conviction is if they can show that limiting Cohen's word choice is actually a regulation of the "manner" of speech, and clearly they cannot. Absent some overwhelming privacy interest, the state cannot punish a person for wearing speech that might offend others. And, you cheerfully add, any attempt to try and claim a stronger decorum interest because you are in a court must fail, as the statute does not specify such special interest. In any event, he took off his jacket when he was inside the courtroom. You call out the professor for simply regurgitating the facts of Cohen v. California, one of the most famous Supreme Court cases on free speech, and sit down in smug satisfaction. (You're a law student; smug satisfaction is the only satisfaction you know.)

And now it's exam time, and your professor gives you the following hypothetical:

It's 2012. A man named Scott Fitzgerald is standing in a corridor of the Supreme Court building in Washington, DC. On Fitzgerald is a jacket, and on the jacket are the words "Occupy Everything," a clear reference to the Occupy Movement. He does not go into the courtroom. The police see him there and tell him to either take off his jacket, leave the building, or face an arrest for unlawful entry. When he asks how his wearing a jacket constitutes unlawful entry, the police promptly arrest him. Fitzgerald challenges the arrest as a violation of his First Amendment rights. How should the court rule?

If you're like me, you would argue that this is nothing more than a modernization of the facts of Cohen, and the court should hold the two as indistinguishable. By giving the ultimatum "take the jacket off or leave," the police are clearly targeting Fitzgerald for the words he is conveying. He cannot be punished for his speech, and any content-neutral rationale for silencing the speech clearly fails for the same reason they failed under Cohen.

According to the Supreme Court Police, though, you would be wrong.

Occupy Online brings us the downright chilling story of Mr. Scott Fitzgerald, who was arrested in the Supreme Court's museum corridor for refusing to take off a jacket that said (without any profanity about it) "Occupy Everything." The video of the arrest shows a calm-but-confused Fitzgerald confronted by the Supreme Court Police.

"We need you to cooperate and leave right now, okay? Or take the jacket off – it's your choice," the officer says. "If not, I'm gonna place you under arrest for unlawful entry."

He asks what the police mean by "unlawful entry," and the police respond by saying, "Place your hands behind your back. You're under arrest."

The police do attempt to evade obvious unconstitutionality (and exposure to a claim for deprivation of civil rights) by claiming Mr. Fitzgerald is breaking a content-neutral law regulating the decorum of the court. The officer cites the U.S. Code for the authority to prevent "demonstrations" that use "signs" in the Supreme Court. That would appear to be a reference to 40 U.S.C. § 6132, which actually says nothing about "demonstrations" (that word is never used in this chapter of the United States code) but does say that it shall be unlawful to "display a sign, placard, or other form of advertisement" on the Supreme Court grounds.

But this cannot give the police a valid reason to eject Mr. Fitzgerald. First off, there is no reason why this law should apply to a communicative message on a jacket. The word "sign" has no definition in the statute, but no sensible reading could extend the language to any written word located on any physical material. By that logic all shirts with words would be "signs" and thus, under the logic of the Supreme Court Police, forbidden from entry. Second, the phrase about "sign[s]" and "placard[s]" is surrounded by other language about "advertisement[s]" and "sale" of items. In other words, this is not a law regulating the ability of people to protest in and around the court; this is a law about restricting the advertisement and sale of goods inside the courtroom.

It's possible that the officer here meant to say "device" instead of "sign," referencing instead 40 U.S.C. § 6135, which prohibits, among other things, the "display" of a "flag, banner, or device designed or adapted to bring public notice to a party, organization, or movement." There actually is another Supreme Court case that concerned this particular statute: United States v. Grace. In Grace, two people challenged this law after they distributed leaflets and held signs outside of the Supreme Court building, and were told to leave. The court was careful to limit their analysis to the law as it applied to activity outside of the building on the adjacent sidewalk, but prohibited application of the statute because "it has insufficient nexus with any of the public interests that may be thought to undergird" it. The Supreme Court held that Congress passed this law to protect the grounds, its inhabitants, and to preserve "proper order and decorum," and that a total ban on flags and banners was not justified in light of these purposes.

The government tried to argue that allowing banners and signs on the grounds would also undercut the Court's appearance of neutrality and impartiality by suggesting that the Justices could be swayed by picketing or marching happening outside the Court. The Court doubted that the public would believe that a lone picketer was capable of improperly influencing the Court. (Justice Marshall, it should be noted, wrote a concurring opinion that said he would strike the whole law.)

The D.C. Court of Appeals has been reluctant to extend Grace beyond its literal holding. But rather than fighting about whether a jacket is a "device" or a "sign" or whether Congress had the right to preserve decorum in the corridor any more than they did the sidewalk, let's not lose sight of the big picture here.  Here, in the halls of the very building that brought us Cohen, Grace, and every other major case which has safeguarded our liberties from the intrusion of government, we have absurd government intrusion, based on hypothetical harms, against a legitimate display of pure speech. The police are doing exactly what the court in Cohen feared, not 50 yards from where they proclaimed that Cohen's speech was "protected from arbitrary government interference by the Constitution" and that "the State may not, consistently with the First and Fourteenth Amendments, make the simple public display here . . . a criminal offense."

Andy Sellars is a staff attorney with the Digital Media Law Project and a fellow at the Berkman Center for Internet & Society. If his jackets have words on them, they usually just say "Red Sox" or reference some random band.

(Image courtesy of Flickr user takomabibelot under CC BY 2.0 license.)