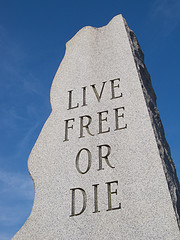 Fighting for the First Amendment can often mean confronting and defending vile, caustic, hurtful, and downright disgusting speech. But not all free speech cases address the words of the most hateful or offensive amongst us. Every once in a while you get a case concerning speech at its most fun and playful. In that spirit, and in light of tomorrow's holiday, I'd like to share an update from a case in New Hampshire that Marc Randazza first blogged about here last October.

The case concerns Jonathan Doyle, who decided to dress up as Bigfoot one day in September 2009 and walk around Mount Monadnock State Park to see how people would react (as you do). He filmed some of the interactions he had with passing hikers, and even convinced two park employees to write a note confirming a "bigfoot" sighting on Mount Monadnock.

Doyle decided to return a week or so later, this time announcing his trip in advance through a press release in the Keene Sentinel.  Doyle brought along some of his friends, including a friend dressed up as "Boda the Blue Yoda" (your guess is as good as mine) and a child dressed up as "the Pirate Ambassador." The trio of disparate characters hiked up the mountain and did some more filming, to the delight and amusement of the participants and scattered spectators.

And then the government stepped in. A park ranger approached Doyle and asked him if he had a "special use permit" under New Hampshire Administrative Rule, Res. 7306.01(a). Doyle did not, and thus he was asked to leave. The permit in question is described by the New Hampshire Supreme Court as follows:

Under New Hampshire Administrative Rule, Res 7306.01(a), a person must obtain a special-use permit to use [N.H. Department of Resources and Economic Development ("DRED")] properties for “[h]olding organized or special events which go beyond routine recreational activities.” To obtain a permit, the applicant must apply for the permit at least thirty days prior to the event, pay a $100 fee and obtain a $2,000,000 insurance policy that covers the State of New Hampshire. N.H. Admin. Rules, Res 7306.01 to .04. Once these requirements are met, DRED “shall approve [the] application.” N.H. Admin. Rules, Res 7306.04(a).

Nothing kills a plan to act out in goofy costumes quite like a $2,000,000 insurance policy and a thirty-day notice requirement. Not content to simply walk away, Doyle teamed up with the New Hampshire Civil Liberties Union and filed a declaratory judgment action, seeking to have the special use permit declared unconstitutional under both New Hampshire and United States constitutional protections for free speech.

The New Hampshire Supreme Court, in an opinion back in January, found for Doyle on their state constitutional claim. The Court held that what Doyle was doing was an exercise in his free speech rights, and assumed (but did not decide) that Mount Monadnock was a traditional public forum. As such, the government could only punish this speech under Supreme Court precedent if the restriction was narrowly tailored to serve a significant government interest. The Court found that this permitting scheme did not qualify:

On its face, Res 7306.01(a) requires a permit for “organized or special events” that go “beyond routine recreational activities.”  . . .  We . . .  interpret Res 7306.01(a) to require a permit when a person does something that is either unusual or planned and is not one of the listed activities [mentioned on Mount Monadnock's website]. As interpreted, the regulation applies to a broad range of people and types of speech.

As to people, the text of Res 7306.01(a) applies without regard to the number of people attending an event. . . . Therefore, the regulation applies equally to large groups, small groups and even one person. This is problematic because “[p]ermit schemes and advance notice requirements that potentially apply to small groups are nearly always overly broad and lack narrow tailoring.” [Citing cases.]

As to types of speech, Res 7306.01(a) applies to a wide range of speech that has no relation to DRED’s significant interests. For example, it would apply to a church group of just six people who organized a hike up the mountain to hold a short, private prayer service at the summit. This event would be unlikely to cause any disturbance or annoyance to park visitors. And, six people praying on the mountain would have a de minimis effect, if any, on park resources.

More troubling is that this regulation needlessly stifles political speech, an integral component to the operation of the system of government established by our Constitution. . . . For example, if a group of three people supporting a political candidate were to climb the mountain and walk around the summit with campaign signs, they would need a permit. . . . Requiring a permit for such an event is wholly unnecessary – a group of three people carrying signs will hardly burden park resources and will not likely cause unwelcome or unwarranted annoyance. Res 7306.01(a), therefore, burdens substantially more speech than is necessary to serve DRED’s interests.

By potentially censoring a wide variety of protected speech through its burdensome requirements, the regulation was found to be unconstitutionally overbroad. (The court went on to express separate concerns with DRED's thirty-day notice requirement, finding it impermissibly burdensome.) Bigfoot, Boda the Blue Yoda, and the Pirate Ambassador are able to engage in their whimsical performance art free from interference by the government.

And I, for one, am thankful for that.

Andy Sellars is a staff attorney at the CMLP, and the Dunham First Amendment Fellow at the Berkman Center for Internet & Society. He has been known to do rogue video productions in weird costumes when asked.