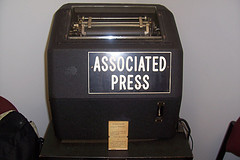 Looking to make their brand “a little more memorable,” the News Licensing Group is now NewsRight – and is billing itself as an “easy rights clearinghouse for the best news reporting and original journalism on the Web.”

Earlier this month, the group announced that 29 major news and information companies have signed on as initial investors in the startup, a new independent digital-rights and content licensing venture led by former ABC News President David Westin.

For those skeptics who see NewsRight as some simple outgrowth of the Associated Press’ highly criticized News Registry project – or as some new form of Righthaven – Westin says that view largely underestimates the months of effort and planning to bring NewsRight to investors and to customers. And, he says, its underestimates their overall philosophy.

“The right solution is the business solution,” said Westin by phone last week. “We plan to go to a wide range of people and help them with their businesses. … We’ll start out slow. We’re going to do one deal at a time. And we’ll need to persuade them.”

Westin said NewsRight intends to target everyone from subscription aggregators, such as libraries and large corporations and governments, to the kinds of large and small independent aggregators on the Web causing concern for traditional news outlets.

In the short term, NewsRight is working to sign up subscription aggregators by providing them not only “clean content” with rights clearance, but also detailed analytics about how such content is being consumed. (That looks to be the value added part that TechDirt wondered about last week.)

Westin said that NewsRight will later approach general online aggregators, including Google, about content and clearance. “We’ll be going to Google when the time is right,” said Westin. “It’s important when we go into the market that we’re not asking for a wealth transfer.” Instead, Westin said, the arrangement has to be good for both sides.

Listening to Westin, I sensed he and NewsRight are realistic about the culture shift they will have to accomplish. The heavy-handedness of a Righthaven approach to the news industry’s woes is obviously not viable.

But will the aggregators and users of news and information be as willing as many music consumers are to pay for access? And what will NewsRight claim needs licensing that arguably might fall within the gray areas of fair use?

All questions still to be answered. But their progress and future announcements merit watching.