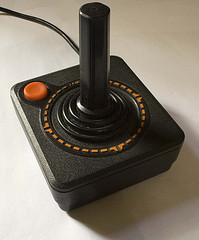 Last week the Digital (nee Citizen) Media Law Project joined an amicus curiae brief filed in Hart v. Electronic Arts, Inc., currently before the United States Court of Appeals for the Third Circuit. [FN] Hart is yet another case concerning the ever-uncomfortable balance between free speech and intellectual property, this time in the context of "right of publicity" laws.

This case involves the NCAA Football series developed by Electronic Arts ("EA"), which allows players to play for and manage real-world collegiate football teams. EA licenses the right to use the team and league names, but not the names or likenesses of individual players. In fact, according to Wikipedia, EA does not claim that the players in the game are based on their real-world counterparts. That said, users are quick to point out that the jersey numbers, personal stats, and player hometowns of the virtual players frequently align with the real athletes.

Ryan Hart, a former quarterback for Rutgers University, claims that he appears in the NCAA Football games from 2004-06 both as a virtual player (that is, there is a character in the game who shares Hart's team, position, basic player stats, and jersey number) and in the 2009 edition of the game in a brief video clip showing the real-world Hart throwing a pass, which appears when a player selects Rutgers as a favorite team. Hart objects to his appearance in the game without his permission as a violation of his right of publicity.

Right of publicity laws vary state to state, but in general these laws prohibit the unauthorized use of a "protected attribute" of a person (such as their name, likeness, or other identifiable characteristic, sometimes limited to those that commercially exploit their likeness, such as celebrities) for a "forbidden purpose" (usually meaning a commercial purpose – the paradigm being a use as part of the defendant's advertising for a product – but it can also mean a use for the defendant's "personal benefit"). See our Legal Guide for more information.

EA responded to Hart's claim by asserting that even if Hart met the elements of a right of publicity claim, such a claim is barred by the First Amendment, as EA should have the right to make the true statement that Hart was a member of the Rutgers football team, and embody that truth in the video game. The U.S. District Court for the District of New Jersey agreed with EA, finding that the games were protected expression, and holding that EA's First Amendment rights outweighed Hart's right of publicity. However, in granting summary judgment for EA, the district court did not resolve which test should be applied to balance these competing rights. Hart then appealed to the Third Circuit claiming that a different, more plaintiff-friendly test should be applied. This is where we came in.

It might seem unusual that the DMLP, as an organization focused on independent and online journalism, would get involved in a case about video games. We nevertheless decided to join as an amicus because, although the Hart involves entertainment, the test that the Third Circuit selects to resolve the conflict between rights of publicity and First Amendment rights can have a significant impact in other contexts, including journalism.

Indeed, rights of publicity frequently collide with constitutionally protected rights of free expression in the news context. For example, journalists frequently report on the happenings of celebrities, politicians, and others whose identities have commercial value. Certainly news organizations derive some form of benefit from such reports, commercial or otherwise. This might meet the statutory definition of a right of publicity violation in some jurisdictions, yet celebrities and others should not have grounds to sue whenever a name is mentioned in connection with newsworthy events.

As a result, the DMLP has a significant interest in how the Third Circuit resolves the issue left open by the district court as to the proper test for analyzing First Amendment rights. To date, courts have generally recognized the risk to free expression that the right of publicity presents, but have been remarkably scatter-shot in how they attempt to balance these interests. (In this respect, the issue in this case bears a strong analogue to our recent work in trademark law.) Some of the judicial balances adopted in right of publicity cases include:

The Third Circuit has yet to adopt a particular test, and the only Supreme Court case on right of publicity is entirely unhelpful in answering this question. Thus, Hart has urged the Court of Appeals to adopt the "predominant purpose" test – entirely unsurprising, given that the test seems to invite the judge to find for the plaintiff whenever the defendant is doing something that the judge deems exploitative. EA, in turn, argued for the Rogers test – equally unsurprising, as it protects all form of expressive uses, including, quite easily, this one.

The district court considered these tests and several others, and in the end voiced its preference for the "transformative" test, stating that the test "is more refined than the Rogers test and better balances the competing interests of the right of publicity and the First Amendment." However, the court did not explicitly adopt this test, instead going on to apply the Rogers test as well. Ultimately, the district court avoided the choice of which of the two tests best calibrates the balance, as both favored EA in the court's analysis.

In our brief, the amici urge the court to affirm the district court's finding in favor of EA, but further argue for the adoption of the Rogers/Restatement test in the Third Circuit. As the brief argues in detail, the right of publicity should only trump a speaker's First Amendment right, if ever, when the speaker is falsely suggesting an endorsement of a product or service by a person without that person's authorization. This limits right of publicity to "commercial speech" as that term is defined in free speech doctrine – that is, when the speaker is proposing a transaction or describing the goods involved in such a commercial transaction. Of the various tests used by the courts, only the Restatement test allows claims to proceed in cases of unauthorized commercial speech, while protecting all other forms of speech (including news reporting).

As the amici further argue, the transformativeness test, and its copyright provenance, do not fit right of publicity cases as cleanly as the district court suggests. In fact, the idea that right of publicity is akin to copyright because both reward the time and money involved in developing a persona or expression misstates reality on both ends. The Supreme Court has rejected a "sweat-of-the-brow" theory for copyright, and numerous law review articles have cast into doubt the need to incentivize a person to become a celebrity. As the test also contemplates comparing an defendant's expression to an abstract sense of persona, the test invites the judge to engage in taste-based assessments of the expression, abhorrent to First Amendment principles.

For more, be sure to read the amicus brief. We'll be sure to provide an update as the case proceeds.

Andy Sellars is staff attorney at the Digital Media Law Project and fellow at the Berkman Center for Internet & Society. By a weird coincidence, his high school, college, and law school's university do not have a varsity football team.