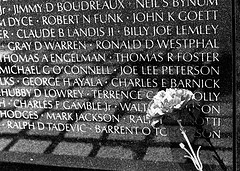 On June 28, 2012, the U.S. Supreme Court held that the Stolen Valor Act is unconstitutional because it penalizes speech (albeit false speech) without consideration of less restrictive alternatives or a clear connection between the speech and the harm sought to be prevented. In U.S. v. Alvarez, No. 11-210, 567 U.S. __ (2012), Justice Kennedy (writing for a plurality of four justices) suggested that a less speech-restrictive option would be for the government to create a database of winners of military awards:

There is, however, at least one less speech-restrictive means by which the Government could likely protect the integrity of the military awards system. A Government-created database could list Congressional Medal of Honor winners. Were a database accessible through the Internet, it would be easy to verify and expose false claims. It appears some private individuals have already created databases similar to this, see Brief for Respondent 25, and at least one database of past winners is online and fully searchable, see Congressional Medal of Honor Society, Full Archive, http://www.cmohs.org/recipient-archive.php. The Solicitor General responds that although Congress and the Department of Defense investigated the feasibility of establishing a database in 2008, the Government "concluded that such a database would be impracticable and insufficiently comprehensive." Brief for United States 55. Without more explanation, it is difficult to assess the Government's claim, especially when at least one database of Congressional Medal of Honor winners already exists.

Plurality Opinion, slip op. at 17. Justice Breyer, writing for himself and Justice Kagan, offered his own suggestion:

[A] more finely tailored statute might, as other kinds of statutes prohibiting false factual statements have done, insist upon a showing that the false statement caused specific harm or at least was material, or focus its coverage on lies most likely to be harmful or on contexts where such lies are most likely to cause harm.

Concurring Opinion, slip op. at 9. Breyer also seconded the plurality's suggestion that a database would go a long way to solving the problem. Id. at 10.

Less than two weeks after the ruling, the Pentagon and Congress have taken these suggestions to heart. The Pentagon announced on July 10th that it was indeed planning to create an online database for military medals. Meanwhile, Sen. Scott Brown (R-MA) has begun anew to push an amended version of the Stolen Valor Act (S. 1728) that he introduced in the Senate last October (before the U.S. Supreme Court ruled in Alvarez, but after the Ninth Circuit denied en banc review of its decision that the existing statute is unconstitutional). Brown's version of the law would make misrepresentations about military service punishable if knowingly made "with intent to obtain anything of value," while offering a defense if the "thing of value is de minimis."

The Pentagon's decision to create a database strikes me as an obvious and correct move here.  According to msnbc.com, the Department of Defense had previously decided not to offer such a service because of the cost involved and concerns about privacy. However, apart from the deterrence of false claims, those with whom I have spoken have uniformly been pleased that there will be a resource where they can look up the achievements of their family members.

Brown's revised version of the Stolen Valor Act raises more serious questions. S. 1728 is notably broader than the original version in cetain respects: Instead of being limited to misrepresentations about medals and awards, it encompasses any misrepresentation regarding military service (except for a soldier's false denial that he or she served), with enhanced penalties for those who falsely claim to have served in a combat zone or as part of a special operations force, or to have received the Congressional Medal of Honor. The "de minimis" defense is also largely irrelevant; prosecutors and defense attorneys would have the same fights over whether the object of the misrepresentation is "of value" without tossing Latin into the mix.

Notwithstanding its expanded reach, S. 1728 might be held constitutional by the Supreme Court (as presently constituted). As Eugene Volokh notes, five justices in Alvarez (the two concurring justices and the three dissenting justices) appear to agree that false statements of fact are entitled to less protection than true statements. These five justices do not agree as to whether this is merely a lesser level of protection (perhaps comparable to commercial speech) or no protection at all, but S. 1728's link to specific harm might be enough to swing the concurring justices.

I am not sure this would be the right result. The Supreme Court has held that a criminal statute violates the First Amendment even if it addresses generally proscribable conduct, if (1) its reach is limited to punishing such conduct that expresses "views on disfavored subjects," R.A.V. v. St. Paul, 505 U.S. 377, 392 (1992), or (2) it excludes specific subject matter from its reach, Police Dept. of Chicago v. Mosley, 408 U.S. 92, 94-95 (1972). S. 1728 appears to run afoul of both of these prohibitions. The bill creates special penalties for false statements about a "disfavored subject," i.e., service in the military, while excluding specific statements within that category from its reach (namely, false statements about not having served in the Armed Forces).

Note that the concern about targeting subject areas is separate from the question of whether and to what extent false speech is protected by the First Amendment. Even if falsity is unprotected, the issue is whether Congress may establish a particular subject matter as being off-limits for lies while not punishing other misrepresentations. Without getting into the knotty question of whether falsity should be treated as a form of conduct rather than expression, if falsity is proscribable then it is analytically similar to the cross-burning in R.A.V.. That is, it would be punishable for the harm it causes but not because of the subject matter involved, unless the subject matter itself specifically enhances the harm (compare child pornography, which may constitutionally be regulated differently than pornography with adult subjects).

This comes back to the underlying question about whether there is some special harm that is caused by false speech about military service or military honors. The plurality in Alvarez found that such harm had not been established; the dissent found that it had.  Justices Breyer and Kagan wanted a more tailored relationship between false statement and harm – but I am not sure that merely requiring that a misrepresentation be used to obtain "anything of value" is the same as establishing harm peculiar to lies about military service. For example, if one lies to obtain a lucrative job, the job might be a "thing of value," but the undeserved salary is the same whether the misrepresentation is that one had served in the military or that one possessed an advanced academic degree.

In the absence of some way in which misrepresentations about military service are worse in their impact than misrepresentations about other topics, such as academic achievements, medical conditions, or other subjects calculated to invoke respect or compassion (and the tangible benefits thereof), Sen. Brown's Stolen Valor Act is constitutionally suspect. Given that we already have a wide array of laws with substantial penalties to punish fraud and misrepresentation, it is also unnecessary.