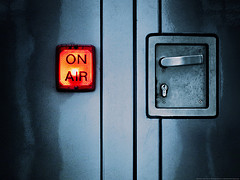 Whether we consider the purpose of copyright to be to protect economic rights or moral rights, copyright is a powerful yet dangerous instrument. Abuse of copyright, particularly using the Digital Millennium Copyright Act's takedown notice system, is hardly new; the Chilling Effects database contains ample evidence of efforts to silence legitimate speech.

But this summer, we saw a trend of abusers using copyright to save face and reduce criticism from an unexpected type of copyright holder: news organizations. It is troubling to see those who typically support stronger First Amendment rights actively partaking in censorship. Now, we've seen a news organization use copyright to eliminate criticism before, in the case of Newport Broadcasting using the DMCA to silence Free Press's "Change the Channels" campaign, but it is disturbing to see a resurgence in this particular form of publicity control.

In one case, KTVU blundered while reporting on the July 6, 2013 Asiana Airlines crash. This San Francisco news station misreported the names of the pilots as "Captain Sum Ting Wong," "Wi Tu Lo," "Ho Lee Fuk" and "Bang Ding Ow" - a racist joke that was mistakenly programmed to be read on air. After this went live, videos of the news anchor reading these fake pilot names were uploaded to YouTube and blogs, drawing further public attention to KTVU's mistake. Those videos are no longer available on YouTube, after KTVU sent a round of DMCA takedown notices to get the videos removed.

Since KTVU's mistakes have been revealed, the station has apologized, placing the blame on the National Transportation Safety Board by noting that an NTSB official had confirmed the pilot names. The NTSB in turn apologized for one of its interns erroneously confirming the pilot names. With respect to the video takedowns, KTVU vice president and general manager Tom Raponi has spun the decision as a move of sensitivity: "The accidental mistake we made was insensitive and offensive. By now, most people have seen it. At this point, continuing to show the video is also insensitive and offensive, especially to the many in our Asian community who were offended. Consistent with our apology, we are carrying through on our responsibility to minimize the thoughtless repetition of the video by others." Despite KTVU's explanation for this selective enforcement of its copyright, many viewers (including this blogger) are more inclined to believe that KTVU acted to "erase" its mistake for its own reputational benefit.

KTVU wasn't alone, however, in using the DMCA to censor criticism of on air activity. The prior week, CNBC hosted Massachusetts Senator Elizabeth Warren on the program "Squawk Box" to discuss Warren's proposed update of the Glass-Steagall Act. During the interview, Senator Warren deftly countered anchor Brian Sullivan's assertion that the government regulation can't effectively protect against banking's financial risk. After it caught the attention of Upworthy, the video of Senator Warren's passionate and intelligent rebuttal went viral. The video, hosted on YouTube, reached roughly 700,000 views in just a few days.

Presumably to protect its reputation, CNBC's parent company, NBC Universal, filed a DMCA takedown notice, and the video clip has consequently been removed from YouTube. Still, a transcript of part of the "smackdown" remains, courtesy of AmericaBlog. In response to the public outcry challenging NBC's actions, CNBC's spokesperson issued the following statement: "We think that the clip featuring Senator Warren is well worth watching and, as you will see below, it has been available to view in multiple locations on CNBC.com since its original posting. The original, copyrighted video clip, like all others on CNBC.com, can be embedded on any third party site through our video player." CNBC also provided a link to the interview as hosted on its site. As the Daily Kos noted, though, limiting video access to the site limits viewers as their site is not compatible with many mobile devices and tablets.

Another humiliating news moment was broadcasted this July; during "Spirited Debate" on FoxNews.com Live, Reza Aslan was questioned about his authorship of Zealot: The Life and Times of Jesus of Nazareth, and the newscaster seemed ignorantly focused on how a Muslim could research and write about Christianity. Unlike the other media failures, though, a quick YouTube search shows thousands of clips of this embarrassing and insulting interview, and Fox hosts the complete interview video on its own site. Although Fox's handling of Reza Aslan's interview was hardly inspiring, the station should at least be commended for not following KTVU and CNBC's lead in turning to the DMCA to cover up the event.

After receiving much criticism for the interview, rather than apologizing, Fox brought in Brent Bozell, president of Media Research Center, to fiercely defend the interview questioning on the program "America Live." Although this was not, in this author's view, a particularly dignified response to this situation, it is important to acknowledge that Fox at least abstained from using copyright law and takedown procedures to attempt to erase the past. As contrasted with the other two news disasters discussed above, Fox was willing to take ownership of its news anchor's speech and did not attempt to censor criticism and other discussion of the interview.

News organizations exist at the heart of political discourse, and should function to encourage public discussion rather than censor it. A news outlet should promote the exchange of ideas, not restrict them simply because the outlet itself might be reflected in a negative light. In this way, copyright abuse by media organizations is particularly offensive to our founding democratic ideals. July was full of embarrassing moments for news organizations, many of whom in turn used copyright law to censor criticism of their mistakes. As more broadcasting blunders will inevitably happen, we can only hope that this month of copyright abuse was an exception, not a new trend.