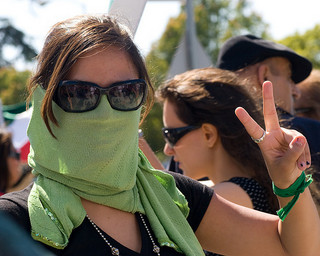 Update (Feb. 25, 2013): Computeworld reports that Rep. Silverstein has withdrawn the bill in question.

Last week the great state of Illinois entered into the not-so-great business of trying to govern anonymous speech online through the introduction of Illinois Senate Bill 1614 by State Senator Ira Silverstein. The bill, introduced on February 13th, seeks to force identification of anonymous online commenters by requiring that

Ignoring that the bill makes no attempt to avoid the obvious dormant commerce clause issues inherent when a state tries to regulate what has to be on all Internet websites, and ignoring that New York tried the same thing last year with nothing to show for it, and ignoring that the average Internet user probably doesn't know how to find their IP address (you can here), and ignoring that IP addresses are dynamically assigned on most ISPs and therefore one's presence at a given IP address does not actually help to identify a person, and ignoring that the definition of "anonymous poster" does not include the critical ingredient that a poster be anonymous, and ignoring that the same State Senator also sponsored a bill to prevent disclosure of identities of firearm owners in Illinois (leading to the pithy critique "guns don't kill people; comments do") – the entire premise of this bill is fundamentally repugnant to the First Amendment and may actually harm those that it is likely intended to help protect.

This is hardly the first battle in the "nymwars," and the obvious unconstitutionality of this bill will come as no surprise to those that have been following along. First Amendment doctrine has long held that, in the words of the Supreme Court, "[a]nonymous pamphlets, leaflets, brochures and even books have played an important role in the progress of mankind," and that "an author's decision to remain anonymous, like other decisions concerning omissions or additions to the content of a publication, is an aspect of the freedom of speech protected by the First Amendment." The courts that have looked at this in the context of anonymous posting online have rightly noted that First Amendment concerns play with equal force on the Internet, and that "[a]nonymous internet speech in blogs or chat rooms in some instances can become the modern equivalent of political pamphleteering." To force identification of the originator of a comment "upon request" without any limitation is just the Talley v. California case replacing each instance of the word "pamphlet" with the word "blog;" it is painfully unconstitutional.

But more importantly, there are very, very good reasons for opposing forced identification for all online speech. As danah boyd noted in one very influential blog post, the "real names policies" that are imposed on platforms like Facebook and Google Plus (with some qualifiers) – while usually done with the intent of increasing civility by forcing identification – can actually levy the greatest harm against the vulnerable persons and groups that such policies are intended to help. There are many people who have a desire to speak out on issues affecting their lives that simply cannot do so under their real names out of fear of harassment, abuse, or physical harm: think of a high school student who secretly gay, a victim of domestic abuse, a whistleblower at a government or corporation, or the victim of an oppressive government. We desperately need these people speaking out as much as they need to speak, and the thought of forcing them to provide their names and address or face deletion is unconscionable.

I don't know if the Illinois legislators in support of this bill have considered the profound negative effects that it would have toward those relying on anonymity for safety, but I trust they were not their intended targets. Instead, I suspect that they are worried about evil, caustic, and angry remarks made in discussions about individuals (like, say, state senators). Much of this is protected speech, of course, and would still be protected were a real name ascribed to the post. But as for the narrower subset of speech that is actionable (e.g., as defamation), we have remedies that address these concerns. Courts across the country have developed legal standards that provide for the general protection of anonymous speech against vexatious litigation while also allowing for valid claims to proceed. Illinois' own standard comes from the Maxon v. Ottawa Publishing Company case and is based on Illinois Supreme Court Rule 224, which requires that a plaintiff plead all elements of a defamation claim before an identity will be revealed. This is admittedly a weak standard as these go, but we have already seen cases where the rule has kept constitutionally protected speech free from vexatious litigation.

Given the litany of errors this bill has, I don't expect to see SB 1614 become law. But before the next state legislature decides to take yet another crack at anonymous speech I hope that they stop and remember that anonymous speech is protected under the First Amendment and that this is done for very good reasons.

Andy Sellars is a staff attorney at the Digital Media Law Project and the Dunham First Amendment Fellow at the Berkman Center for Internet & Society. Thanks to fellow Fellow Kit Walsh for the tip on this story.