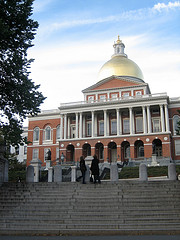 The DMLP would like to highlight a recent post by our friend and colleague Rob Bertsche, a parter at Boston law firm Prince Lobel Tye LLP. Rob reported from the Massachusetts State House, where earlier this week the Joint Committee on the Judiciary debated H.1553, the proposed Massachusetts reporters' shield law.

Read his account for details, but as a quick highlight, here's Rob's description of the general contours of the bill, as it applies to identity of sources:

[T]he proposed law would apply to "covered persons," those working for "news media" and who prepared the information at issue in that capacity. "News media," in turn, is defined to include not only mainstream and student media but also "any entity that is in the regular business of gathering and disseminating news or information to the public by any means…." The bill offers a near- absolute privilege as to disclosure of information identifying any news source (whether confidential or not), subject only to an exception where necessary "to prevent imminent and actual harm to public security from acts of terrorism," in which case disclosure may be compelled if disclosure of the source’s identify "would prevent such harm" and if "the harm sought to be redressed by requiring disclosure clearly outweighs the public interest in protecting the free flow of information."

Rob's post on the Prince Lobel blog has much more, including other critical definitions and reactions from some of the legislators and witnesses.

From my perspective, the bill represents a welcome improvement from the current Massachusetts scheme for protection of sources and source material, a blend of limited common law protections in state court with some recognition of a narrow right under the First Amendment in federal court. But even when you compare it to the other state shield statutes, this bill signals a strong recognition of the importance of source protection in fostering a robust and independent media (entirely fitting for the state that gave America the first independent press).

Judging the quality of shield laws usually means examining the law across two axes - the strength of the privilege and the breadth of coverage. This bill does well on both counts. While there are a few states with an absolute privilege (e.g., Alabama and Kentucky), or an absolute privilege in some matters (e.g., California, in civil suits), the provisions in the Massachusetts law are quite robust, only overcome with respect to source identities in the most extreme of circumstances, and with safeguards for other source material to ensure that the public interest in information dissemination is addressed by the court before compelling disclosure.

Breadth of coverage, as Mary-Rose Papandrea has noted, is where these laws most frequently suffer, often leaving out critical players in the modern news ecosystem, such as independent or citizen journalists, or those engaged in only one facet of the newsgathering in dissemination process. For an example one need only look to the proposed federal shield law, which currently excludes websites that primarily work to surface primary source material without authorization of their subjects. (This is obviously designed to exclude Wikileaks, but risks impacting many other organizations that focus on this stage of the journalism process.) Here, again, Massachusetts seems to be taking a much more intelligent path. The bill's coverage extends to any "employee, agent, or independent contractor of any news media," and as indicated above the bill defines "news media" as, among other, narrower, things,

any entity that is in the regular business of gathering and disseminating news or information to the public by any means, including, but not limited to, print, broadcast, photographic, mechanical, internet, or electronic distribution.

If this definition leaves me with one lingering doubt, it rests with how courts will approach the word "business." To take a narrow definition, and only refer to "business" as "income and livelihood," would foreclose non-market or decentralized members of the media ecosystem, and at its most extreme risk those that aren't engaged in for-profit media production, such as non-profit and cooperative journalism entities. (Yochai Benkler noted similar concerns regarding the federal shield bill.) But as anyone who remembers the exchange between Scrooge and Marley in A Christmas Carol knows, "business" is also capable of a more general, even civic-oriented, meaning, and as long as the legislature intends "business" to mean "one's mission," this would seem to cover all those engaged in the process of journalism in Massachusetts, a very welcome improvement indeed. For as Rob says in his post, quoting from Massachusetts State Rep. Josh Cutler:

"[The bill] is not about protecting journalists – it’s about protecting journalism," he said. It’s not the creation of a new evidentiary privilege, but rather the codification of an existing common law privilege. It’s not a "roadblock" to district attorneys, but rather "a road map setting forth the rules." It’s "not a new, unproven legal theory," but rather a piece of legislation already in place, to a greater or lesser extent, in 40 states. And it’s "not about helping media conglomerates," but rather about "protecting the little guy," including the small-town newspapers for whom even the "mere threat of a subpoena can have a chilling effect."

We'll have more as the bill moves through the legislature, and thanks again to Rob Bertsche for sharing details of the hearing.

Andy Sellars is a staff attorney at the Digital Media Law Project and the Dunham First Amendment Fellow at the Berkman Center for Internet & Society.