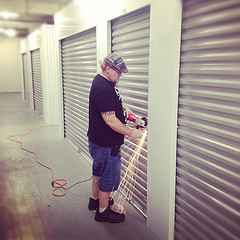 A California court recently held that an allegedly fake reality television show can be an expression of free speech that warrants protection under the First Amendment.

The plaintiff, Dave Hester, was a cast member for three seasons on A&E’s hit reality show Storage Wars. The show centers around the lives of a handful of bidders who compete in auctions for abandoned self-storage lockers across the country. The rules of the show are simple: the lockers are up for grabs to the highest bidder, but each prospective bidder may only look at the locker from the outside—which means that no one is allowed to probe through the inner contents of the storage unit. The show's talent—Hester and several other storage bidders—are portrayed with robust, outlandish personalities that cause them to get into frequent disputes with one another on-air, creating the perfect conflict-riddled brew for prime reality television.

The cast members of Storage Wars are not strangers to legal drama. Even Hester's infamous bidding technique, which consists of hollering out a loud "YUUUP!" has been under legal dispute. This time, however, one of Hester's legal claims against the show's network and production company was SLAPPed down in an order granted by the Superior Court of Los Angeles.

Hester's complaint alleged that he was fired after complaining to the Storage Wars producers that their "rigging" of the storage units—by “salting” the units with new, valuable items before the on-camera biding—was illegal.  His complaint asserted five claims: (1) wrongful termination; (2) breach of contract; (3) breach of the implied covenant of good faith and fair dealing; (4) unfair business practices; and (5) declaratory relief.

One of these claims is particularly interesting. Hester bases his unfair business practices claim on a federal statute, 47 U.S.C. § 509, which prohibits producing a “purportedly bona fide contest of intellectual knowledge” with the “intent to deceive the viewing public.” Congress enacted section 509 in response to scandals involving popular game shows of the 1950's, such as the infamous programs $64,000 Challenge and Twenty-One. Twenty-One, when it found its audience lacking, spiced things up by rigging the show to make the on-air competition more exciting. The 1994 film Quiz Show directed by Robert Redford and starring Ralph Fiennes focused on the game show's scandal and the subsequent Congressional investigation that spurred section 509.

Section 509(b)(1) defines a contest as a broadcast in which "any money or any other thing of value is offered as a prize or prizes to be paid or presented by the program sponsor or by any other person." A violation of Section 509 would include “influencing, prearranging, or predetermining outcomes” of a television or radio show. The penalties for a violation of the statute include a fine of up to $10,000, imprisonment for up to one year, or both.

Hester claims that Storage Wars violated Section 509 when producers implanted items of value into the lockers to spice up the show. This alleged unlawful conduct, according to Hester, made him appear less skillful than the other bidders on the show, which he claims has caused a loss of business in his own auction stores.

Despite the potential comparisons of Storage Wars to Twenty-One, the different competition formats present challenges in applying Section 509 to reality shows. For example, even though Section 509 does not distinguish between a contest or an auction, it is unclear whether Section 509 would apply to a situation where bidders pay out of their own pockets for the contents of the storage facilities and then take their newly-acquired treasures back to their own stores for sale. Can those purchases, or the more inchoate benefit of a reputation for successfully guessing the value of the lockers' contents,  really be considered a "prize" under Section 509 comparable to those in a game show? Further, does allegedly "salting" a locker to make the storage facilities more enticing affect the outcome of the auction in a way that would trigger the statute?

These questions were raised by A&E and Original Productions in their January 24, 2013 special motion to strike Hester's unfair business practices claim under California's anti-SLAPP statute. The defendants addressed two of Hester's claims: wrongful termination and unfair business practices. The motion to strike challenged Hester's reliance on section 509 as a basis for claiming that the defendants engaged in illegal activity, arguing that: (1) section 509 does not apply to cable television, which is governed under FCC authority; (2) Storage Wars is not a contest of chance, intellectual knowledge, or intellectual skill; (3) section 509 governs prizes given to members of the "general public," and, as Hester is a cast member, he is not a member of the general public; and (4) Hester's argument is conclusory and he does not meet his burden of proof of alleging "unfair" or "illegal" conduct.

California's anti-SLAPP law, California Code of Civil Procedure Section 425.16, was enacted to combat the large volume of SLAPP suits brought in California aimed at chilling free speech. To be successful in a California anti-SLAPP motion, the defendant must file a special motion to strike within 60 days of the service of a complaint and show that his/her actions were in furtherance of his/her right of petition or free speech under the First Amendment. A defendant in a SLAPP suit whose special motion to strike is granted is entitled to recover attorney's fees and costs.

In their motion to strike, A&E and Original Productions argued that Hester's unfair business practices claim met the definition of a SLAPP suit because it was targeting speech that is protected by the First Amendment and addresses a public interest in "popular culture." The defendants argued that Hester could not demonstrate a probability of prevailing on the claim because the defendants' pre-production work, content-based creative decisions, and filming of the show all furthered the show's speech and were protected by the First Amendment, and because Hester did not suffer injury.

On March 12, the court granted the defendant's special motion to strike and threw out Hester's unfair business practices claim. In the court order, Judge Michael Johnson stated that one of Hester's arguments -- that Hester's claims are not related to the television show itself but rather challenge A&E and Original Productions' unethical behavior in salting the storage facilities -- "makes no sense." The court held that Hester's claims challenged the manner through which the defendants presented their program, which is a protected conduct under California's anti-SLAPP statute. The court also held that television broadcast involves free speech, and free speech includes the production activities that "advance or assist in the creation of a television program."

With respect to Hester's section 509 argument, the court held even if the defendants' conduct did violate the federal statute, that conduct would not establish a violation of California's Unfair Competition Law because the California law only regulates business that is "within the arena of commercial speech." The court stated that noncommercial speech, like Storage Wars, is beyond the UCL's reach. In addressing Hester's wrongful termination claim, the court granted a 20-day window to Hester to amend his complaint to include allegations that the defendants violated a fundamental public policy, an essential element of his wrongful termination claim.

The docket shows that Hester filed an amended complaint on April 10, and on May 13, the defendants filed a motion to recover attorney's fees and costs related to the grant of the anti-SLAPP motion. On July 12, the court ordered Hester to pay attorneys’ fees and costs of $122,692.

That number may seem high, but it likely won't cause Hester too much grief. Hester is purportedly worth over $3 million and, while he may have lost business in his stores due to his portrayal as a "less skillful" businessman on the show as he claims in his complaint, the fame he has gained by his participation on the show seems to have boosted sales in other areas of his life. Hester has been in the buying-and-selling business over twenty years, but it wasn't until 2010, when the show began production, that Hester's income took off; according to The Richest, an archive of celebrity income, Hester has "earned his net worth" during his time at Storage Wars.

One claim has been dismissed, yet Hester's suit continues on as four of his claims remain standing. Although Hester’s future career in realty television is uncertain, the lesson he—and other disgruntled reality television stars—should pull from the court’s decision is clear: beware a frivolous law suit challenging a reality television show’s First Amendment freedom of speech privileges. Otherwise, you might just get SLAPPed.

Samantha Scheller is a rising 2L at the University of North Carolina School of Law. In her past life, she produced and shot for a number of reality television shows.