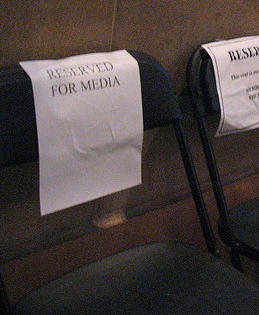 In the wake of the Associated Press and James Rosen incidents, the call for statutory protection for journalists and their sources has started anew. The Obama administration has called on Sen. Chuck Schumer to re-introduce a federal media shield law, reviving a concept which floundered in 2009 in the wake of the Wikileaks disclosures and raising questions over the sufficiency of that proposal. Just as in 2009, one of the issues that will inevitably be raised is the question of who will receive the protection of such a law. This question is well known to those who practice media and Internet law as the “who is a journalist?” problem. But this is – and in some ways always has been – the wrong question.

The “who is a journalist?” problem has been with us for quite a while. The great Supreme Court defamation cases of the post-Sullivan/pre-Internet era were largely fought by the institutional media, and this is often reflected in the language of the Court. For example, in Philadelphia Newspapers, Inc. v. Hepps, the critical 1986 First Amendment ruling stating that plaintiffs have the burden to prove falsity in defamation actions, the Court held specifically that:

[T]he need to encourage debate on public issues … is of concern … in this case involving a private suit for damages: placement by state law of the burden of proving truth upon media defendants who publish speech of public concern deters such speech because of the fear that liability will unjustifiably result. ... Because such a "chilling" effect would be antithetical to the First Amendment's protection of true speech on matters of public concern, we believe that a private-figure plaintiff must bear the burden of showing that the speech at issue is false before recovering damages for defamation from a media defendant.

475 U.S. 767 at 777 (emphasis added). Clearly, the Court associated “debate on public issues” with the function of the media, and so focused its holding on the particular institutional media defendant before it. But the Court explicitly did not reach the issue of nonmedia defendants, id. at 779 n. 4, and Justice Brennan, in his concurrence, wrote separately to emphasize that

such a distinction is irreconcilable with the fundamental First Amendment principle that the inherent worth of speech in terms of its capacity for informing the public does not depend upon the identity of the source, whether corporation, association, union, or individual.

And that, exactly, is the issue. When considering whether to grant legal protection for the gathering and dissemination of information, the question should not be the person performing those acts, i.e., “who is a journalist?,” but “is this an act of journalism?” Before the user-generated content revolution, focusing on journalists (i.e., people defined by their institutional affiliations) served as a functional if rough approximation of the true interests at stake (i.e., debate on issues of public concern). That is no longer the case.

Professional journalists play a critical role in our society. The majority of information of local, national and global importance is still (and, barring seismic shifts in communication, will continue to be) gathered and reported first by those who have dedicated their education and careers to the practice of journalism. Professional journalists have skill in parsing information and providing context that most others lack. Regardless of whether they practice in corporate organizations or independently, professional journalists deserve and require all of the legal protections that they have for these tasks.

But professional journalists now share the information ecology with a much wider array of members of the public who care about particular communities and issues. These individuals can often speak from deep personal knowledge and identify important information that others might miss. And from the Rodney King incident forward, there has been recognition that sometimes informing the public is not about education and professional commitment, but about being in the right place at the right time. Institutional media organizations still play an important role in conveying information gathered by individuals to the public at large, but the Internet provides many other paths to an audience. The citizens involved in bringing this information to the public don't need to be called "journalists" for the information they possess to have value (although these people are entitled to respect and are free to argue their right to that title). Regardless of names, the manner in which this information of public importance is gathered and conveyed is entitled to no less protection than traditional newsgathering.

Most courts interpreting Hepps and similar cases have recognized that it is the “need to encourage debate on public issues” that drove the Court’s decision in that case, and not the nature of the defendant as a media outlet; as such, these courts normally grant the protection outlined in Hepps to all defamation defendants whose speech involves matters of public concern. But some courts still struggle with this, finding reasons to draw a distinction between corporate entities and others.

Case law is not the only place where we have seen a persistent distinction between the traditional press and the public. Legislators drafting laws relating to access to information or protection for newsgathering have often limited their protection to "media," "journalists" or "newspeople." State public records laws sometimes grant special benefits to media requestors, in terms of access or fees. The concept of government-issued press credentials for access to places and events is naturally tied to identification of the press; similarly, those courts that allow use of cameras and electronic devices in the courtroom often limit their use to registered members of the institutional media. And, as discussed above, the protection of state shield laws is frequently tied to the role of a journalist.

Sometimes, there are legitimate practical concerns behind these laws. There is only so much space for cameras in a courtroom (even though recording equipment takes up much less space than it used to), and allowing too many people beyond police lines could in some cases interfere with police activity and public safety. In such circumstances, it would seem to make sense to limit access to those in the best position to disseminate information widely. Other alternatives are available, however, such as allowing a second camera into court for non-institutional media (as per Massachusetts’ new cameras in the courtroom rule) or use of pool camera arrangements. More importantly, it is important to consider these practical issues on a case-by-case basis, and recognize that more flexibility might be possible in some circumstances.

With respect to protection of confidential sources, security against government search and seizure of work product, and other protections against the co-opting of newsgathering as a litigation or law enforcement tool, there is no reason to focus on whether a person is a “journalist” as opposed to whether their newsgathering activity is worthy of protection. The information at issue and the act or intent of conveying that information to the public should be determinative. Fortunately, we are seeing positive movement on this issue, with new legislation more likely to be focused on the newsgathering functions that a person performs (as in Tennessee’s shield law) and less on their professional status (as in New York’s shield law).

Nevertheless, these laws still normally phrase the issue as who qualifies for protection rather than what activities qualify for that protection. This might seem a trivial distinction, but it unnecessarily complicates discussion of these laws by interjecting the contentious and divisive question of who has the right to claim to be a “journalist.” That is a question that does not need to be resolved by law. By focusing on the process and the information, rather than the person, we can direct legal efforts toward what really matters: getting the information that people need into the hands of the public.