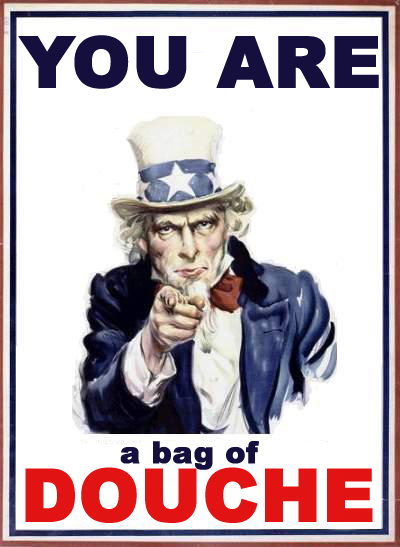 Yvette Gorzelany, Joanna Obiedzinski, and Paulina Pakos are the latest plaintiffs to seek a big payday from Simon & Schuster over the book Hot Chicks with Douchebags. (Michael Minelli, a 27-year old “club promoter," still has a pending suit in Nevada against Simon & Schuster).

The three plaintiffs in this suit “contend[ed] that the use of their photographs in the book Hot Chicks With Douchebags was defamatory.” (Op. at 2). The New Jersey judge flushed the case out of his courtroom -- granting Simon & Schuster’s motion to dismiss in Gorzelany v. Simon & Schuster, BER-L-7775-08 (Bergen Cty. 2009). The facts were undisputed: The three allegedly hot chicks attended Club Bliss, apparently a lair of douchebaggery so foul that vinegar and water should be served at the bar. While there, they apparently consorted, at least momentarily, with a few douchebags – and thus became background fodder in the author’s photographs of "The Federbag" and in some instructions on how to cease being a douchebag.

“The Federbag”…a type of male who the author considers a “douche celebrity.” He described a federbag as “famous in their own minds, they live the celebrity rock star life style while being neither celebrity nor rock star.” None of the paragraphs has anything to say about the plaintiffs in the photograph. With respect to the photograph depicting the plaintiff Pauline Pakos it is located on page 180 and comes under the title heading “Step 5: Leave New Jersey”. Under this heading the author describes why in his opinion leaving New Jersey is an essential step in “the de-douchification process” of a male. Again, nothing is mentioned about plaintiff Pakos any of the females depicted in the photographs contained in that chapter. (Op. at 4)

The Court obviously read the book – which must have been a refreshing experience. I can’t get Flori-duh state court judges to read pleadings, let alone read exhibits to them. Go New Jersey!

The book begins by defining a “douchebag” and including a definition which is not recognized in the dictionary. In fact, it appears to be one made up in order to be humorous. At the end of the book, in his acknowledgment, the author states “I must give a special round of thanks to all the participants and contributors on the blog whose enthusiasm and hilarious commentary mocking the douchescrote and celebrating the hott have kept me going.” On the rear cover there is a quote “Douchebags need a smack.” This quote is attributable to “Gandhi”. (Op. at 4)

The Court took into account that the book was obviously intended to be humorous, and thus no reasonable reader would interpret the work to be a false statement of fact.

how can a person reasonably believe that in 1981 archaeologist Renee Emile Bellaqua uncovered in a cave in Gali Israel a highly controversial Third Century religious scroll suggesting that the “douchey/hotty” coupling was a troublesome facet in early social religious structures? Or would a reasonable person believe that Jean-Paul Sartre stated “man is condemned to be douchey because once thrown into the world he is responsible for every douchey thing that he does”? Or that John Hopkins has a Department of Scrotology or that there was a Theban King Seqenenra Tag, in ancient Egypt known as “gito of the southern city”? An examination of the book reveals that old photographs of paintings are doctored to suit the satire in the book. The author also defines a completely fictitious time period “BG”, before the actor Richie Grieco and “AG” after the actor’s impact on the douchebag male style.(Op. at 4-5)

The Court found that as a matter of law, the book was not about the chicks, and no defamatory meaning could be imputed to any of the photographs. No matter how much vinegar the chicks squirted into their pleadings, no degree of innuendo could make the case a pay day for their douchetastic counsel, sleazy enough to bring such a stinky case. See Vogel v. Forbes, 500 F.Supp. 1081 (A.D. Pa. 1980); Shapiro v. Newsday, 5 Med.L.Rptr. 2007.

An examination of the entire publication compels the Court to conclude that a reasonable person would determine that the book Hot Chicks With Douchebags is intended to be satirical humor. While it may in some eyes be vulgar and tasteless, it definitely is not an assertion of fact that anyone would take seriously. Pring v. Penthouse International, 695 F.2d 438, 443 (10th Cir. 1982). Failing as an assertion of fact, the book must be treated as protected expression of opinion. Consequently, it is absolutely privileged under the First Amendment. (Op. at 5-6)

But wait, there’s more! Yes, as if the defamation claim, (which any douchebag could have told you was doomed) wasn’t enough, there were more crybaby counts in the complaint. Count five is the funniest:

In count five, plaintiffs assert a cause of action for unfair competition under a non-existent New Jersey statute described as the “Business & Professions Code Section 17200.” (Op. at 8).

Next time these attorneys cut and paste a complaint, maybe they ought to make sure it is from the right state. Yes, anyone could make a mistake, but making a mistake like this in a frivolous complaint that tries to do harm to my beloved First Amendment is gonna bring out the pwnage. Not content with one count under a non-existent statute, they also brought a claim for “humiliation.”

In count eight, plaintiffs allege a claim for “humiliation.” This cause of action is not recognized in New Jersey. It is plausible that this count could be construed as an emotional distress claim. However, as set forth above in greater detail, plaintiffs have not supported the requisite elements to support a claim for emotional distress. Accordingly, count eight must be dismissed as it is a non-viable claim. (Op. at 9)

The chicks also sued for intentional and negligent infliction of emotional distress, conspiracy, and invasion of privacy. Suffice to say that the court dismissed those counts as unsupportable as a matter of law. The invasion of privacy count was particularly funny.

Invasion of privacy occurs when “the matters revealed were actually private, that dissemination of such facts would be offensive to a reasonable person, and that there is no legitimate interest of the public in being apprised of the facts publicized.” Romaine, supra, 109 N.J. at 297. In order to be considered “private,” the plaintiff must allege publication of “facts about himself that he does not expose to the public eye, but keeps entirely to himself or at most reveals only to his family or to his close friends.” Restatement (Second) of Torts § 652D cmt. B (1977). Here, the photographs were taken at Club Bliss which is a public establishment. Therefore, the photographs cannot be considered private as “an individual cannot expect to have a constitutionally protected privacy interest in matters that are exposed to public view” and “no person can have a reasonable expectation of privacy in his appearance.” Doe v. Poritz, 142 N.J. 1, 80 (1995). (Op. at 7-8).

After reading this complaint, it seems that Judge Toskos doesn't mess around when First Amendment values are at stake. Additionally, Judge Toskos also seems to have brought a bit of pity to work that day. Had I been on the bench, I would have slapped the chicks and their lawyers with sanctions under the non-existent rule against douchebaggery.