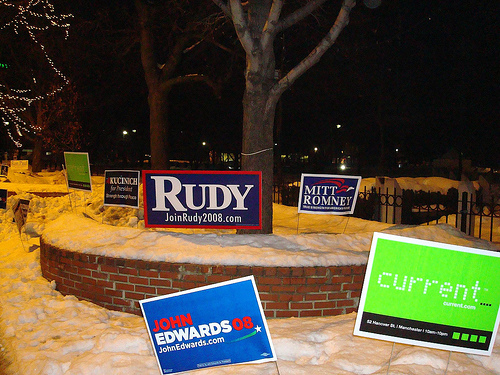 As social media become more popular, it is inevitable that enterprising politicians will use it promote themselves, connect with constituents, and garner votes.  The White House has a blog, several Senators and House members tweet, and elected officials and candidates at all levels of government are using social media to get out their messages.

Last summer, a Congressman's use of his cell phone to post pictures of a GOP "pep rally" on the House floor and a subsequent press conference prompted a partisan dust-up over archaic "franking" rules (large pdf) which required House members to post official content only on the house.gov domain — no embedded YouTube videos or Scribd documents, no Facebook posts, no Tweets, no Qik videos.  The House Administration Committee eventually changed the rules to allow postings on other sites, within certain guidelines:

The official content of any material posted by the Member on any Web site must be in compliance with Federal law and House Rules and Regulations applicable to official communications and germane to the conduct of the Member’s official and representational duties.

The Committee also announced that it was considering other rule changes to accommodate new social media technologies.

Another rule that may be archaic is the policy, adopted in 2000 and reinforced in 2003, generally prohibiting federal agencies from using web-tracking technologies such as persistent cookies on their sites.  The Obama Administration was criticized in its early months for using cookies on the new White House web site, and for using commercial sites (such as You Tube) with cookies. (The prior administration also had this problem).  In July, the Office of Management and Budget solicited comments on this policy, see 74 Fed. Reg. 37062, with a view towards loosening the restrictions to allow customization of federal web sites.

Politicians' use of social media for campaigning can also conflict with federal, state and local campaign laws.

Because the main focus of federal campaign laws is campaign spending, their application to social media is unclear.  In response to a federal court decision on the issue, see Shays v. Federal Election Commission, 337 F. Supp. 2d 28 (D.D.C. 2004), aff’d, 414 F.3d 76 (D.C. Cir. 2005), reh’g en banc denied (Oct. 21, 2005), the Federal Election Commission amended its regulations in 2006 to make paid advertisements on the Internet subject to its regulations on election spending by campaigns, political parties, and coordinated activities.  But the Commission explained that this action did not affect political activities on the Internet by others. "Everyday activity by individuals, even when political in nature, will not be affected by the changes made in this rulemaking," the Commission stated in its notice of the rules change. 71 Fed. Reg. 18589 (April 12, 2006).

As explained by David Ardia on this blog and in more detail by the FEC and in the Center for Democracy & Technology's Net Democracy Guide, the revised regulations come into play when more than $1,000 is spent with the "major purpose" of influencing a federal election; ads (paid and, in some circumstances, free) are placed for candidates; or funds are solicited for candidates.

State rules are a different matter.  For example, a candidate for mayor of St. Petersburg, Florida may have run afoul of the state's campaign laws that require disclaimers on all ads by placing disclaimer-less ads with Google, which limits the number of characters you can use. The Florida Election Commission has proposed a $250 fine for the omission, which the candidate — who lost the primary — is challenging.  In response to this case, a bill has been introduced in the Florida legislature that would exempt Internet ads from the disclaimer requirement, as long as the ad links to a web site that contains the disclaimer.

In 2000, the American Bar Association urged all states to review and revise their election laws in light of new technologies, and several states have done so.  Some examples:

This process is sure to continue. As politicians' use of social media continues to grow, state and federal rules regarding campaigns will have to be modified to account for these new technologies.

Like many other things, these policies will have to evolve to remain relevant and effective in the Internet era.