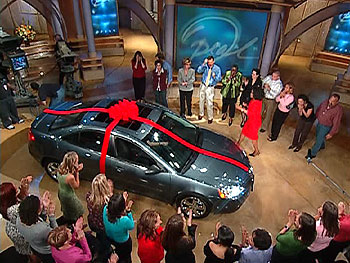 Nice gesture on Google's part, and good public relations.  But as pointed out by blogger Marshall Kirkpatrick of ReadWriteWeb, it is also a test of the newly updated Federal Trade Commission "Guides Concerning the Use of Endorsements and Testimonials in Advertising," 16 CFR Part 255 (2010) (html) (large pdf; guides start on p. 55).

The revised guidelines—which I've discussed previously (here and here) and are explained in detail in CMLP's legal guide—went into effect December 1, 2009 and require bloggers and posters on other social media (such as Twitter and Facebook) who receive a free product or service to disclose the freebie in their reviews or commentary about the product or service, or face the possibility of an FTC enforcement action.

Goggle reminded recipients of the FTC rules in the 30-day loan agreement, but how many actually did so? According to Kirkpatrick's observations, not many.

As noted in the legal guide, the FTC has been assuring bloggers and social media contributors that it is not likely to pursue them for not following the disclosure guidelines, although the agency does not rule this option out altogether.  As Richard Cleland, Associate Director of the FTC's Advertising Division, told CNET:

As a practical matter, we don't have the resources to look at 500,000 blogs. We don't even have the resources to monitor a thousand blogs. And if somebody reports violations then we might look at individual cases, but in the bigger picture, we think that we have a reason to believe that if bloggers understand the circumstances under which a disclosure should be made, that they'll be able to make the disclosure. Right now we're trying to focus on education.

Another test case for the new FTC rules is Gwyneth Paltrow's rave review of La Mamounia Hotel in Marrakesh, Morocco on her Goop lifestyle blog.  As pointed out by columnist Jeff Bercovici in the Daily Finance blog, the FTC guides applicable to bloggers appear to require Paltrow to disclose if she was able to stay at the hotel for free or at a discount.  (While the financial arrangements are unclear, Paltrow was among a number of celebrities featured at the hotel's grand re-opening.)

The standards for disclosure of "material connections" in the FTC Guides at least theoretically apply to celebrity endorsers such as Paltrow. But Cleland told the Daily Finance that celebrities are different from most bloggers because the FTC guides require disclosure only when it is not obvious that the endorser received a free or discounted product or service. As stated in the Guides,

When there exists a connection between the endorser and the seller of the advertised product that might materially affect the weight or credibility of the endorsement (i.e., the connection is not reasonably expected by the audience), such connection must be fully disclosed.

The boundaries of the rule are outlined by two of the FTC's examples under section 255.5:

Example 2: A film star endorses a particular food product. The endorsement regards only points of taste and individual preference. This endorsement must, of course, comply with § 255.1; but regardless of whether the star's compensation for the commercial is a $1 million cash payment or a royalty for each product sold by the advertiser during the next year, no disclosure is required because such payments likely are ordinarily expected by viewers.

Example 3: During an appearance by a well-known professional tennis player on a television talk show, the host comments that the past few months have been the best of her career and during this time she has risen to her highest level ever in the rankings. She responds by attributing the improvement in her game to the fact that she is seeing the ball better than she used to, ever since having laser vision correction surgery at a clinic that she identifies by name. . . . Consumers might not realize that a celebrity discussing a medical procedure in a television interview has been paid for doing so, and knowledge of such payments would likely affect the weight or credibility consumers give to the celebrity's endorsement. Without a clear and conspicuous disclosure that the athlete has been engaged as a spokesperson for the clinic, this endorsement is likely to be deceptive. . . .

Assume that instead of speaking about the clinic in a television interview, the tennis player touts the results of her surgery—mentioning the clinic by name— on a social networking site that allows her fans to read in real time what is happening in her life. Given the nature of the medium in which her endorsement is disseminated, consumers might not realize that she is a paid endorser. Because that information might affect the weight consumers give to her endorsement, her relationship with the clinic should be disclosed.

So, because most readers of many of the bloggers who got the Google phones are not likely to understand the arrangement without being told about it, the FTC guides require disclosure.  But because celebrities like Paltrow routinely receive freebies, she does not have to disclose if her stay was comp-ed in her endorsement of the hotel.

This "reasonable expectation" standard is the same rationale that the FTC has used to apply the "material connections" disclosure requirement differently to traditional and online media, which I've criticized before as a possible legal ground for attacking an enforcement action under the FTC guides.

But the rules are still out there, and all media contributors who discuss products and services should be familiar with them. Unless, it appears, you're a celebrity who "everyone knows" gets things for free.

Daily Finance reports on a new twist on blogger incentives: a PR firm offering "finder's fees" to bloggers covering fashion, beauty, health and fitness who refer small companies that sign up to be represented. Not exactly a quid-pro-quo as envisioned by the FTC guides (since the blogger is not writing about the PR firm that's offering the cash), but a "material connection" nevertheless.