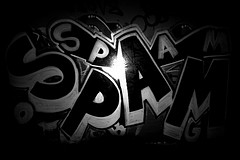 The court has not yet decided on the merits of these claims.  But MAXBOUNTY sought to have the suit dismissed, in part because the company said that the CAN-SPAM Act applied only to e-mail, not to messages sent within Facebook.

The CAN-SPAM Act was passed in 2003, and generally requires accurate sender information for commercial e-mail messages; that senders allow and honor opt-out requests; and provide a physical, real-world address where the advertiser can be located.  In its suit against MAXBOUNTY, Facebook alleged that the company had violated each of these provisions.

The court, citing earlier cases on the question, held that "the Act should be interpreted expansively and in accordance with its broad legislative purpose."

"A determination that the communications at issue here are 'electronic messages,'" the court concluded, "... is consistent with the intent of Congress to mitigate the number of misleading commercial communications that overburden infrastructure of the internet."  Thus the court declined to dismiss Facebook's CAN-SPAM Act claims, although the court did dismiss a conspiracy claim that Facebook made against MAXBOUNTY.

What does this mean for citizen journalists who use social media platforms?  It means that if you send an advertising message to individual users through social media sites, you have to fulfill the obligations of the CAN-SPAM Act. This also would apply to automatic, unsolicited messages sent to social media users telling them about content available on a more traditional site.