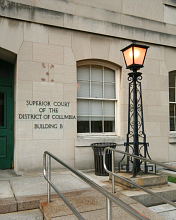 The Blog of the Legal Times reports that the Superior Court of the District of Columbia – the local trial court for the nation's capital – has issued a new administrative order regarding use of electronic devices in the courthouse. And like other courts, the new rules impose a class system of "haves" and "have nots" – favored types of the people can have and use the devices, while everyone else can not. The rules also contain an archaic view of electronic devices that effectively means that even when the rules allow them to be used, they cannot be used for any modern, web-based functions.

In practice, this means that all such devices must be left outside the courthouse, or checked with court officers at the entrances.

The new order, Admin. Order 11-17 (D.C. Super. Nov. 9, 2011) continues this policy, by generally requiring that "before entering any courtroom, everyone shall turn off all electronic devices in his or her possession. Pocket-sized electronic devices shall be turned off and stowed so that they are not visible." The order's definition of "electronic device" is expansive, and includes all types of cameras (whether film or digital), cell phones, computers, analog or digital recorders, MP3 players, "and any other device that is capable of receiving, transmitting, or recording messages, images, sounds, data, or other information by electronic means".

The order specifically mentions that it covers "all members of the media and students, who may take notes manually," but the order also provides that "[m]embers of the media may be given permission by the presiding judicial officer to use electronic devices in the courtroom for official business."

While the order says that this requirement applies to "everyone," it does not really apply to every person in the courthouse. The order goes on to state that "[t]his prohibition does not include a litigant representing himself or herself and to whom the court has given permission to use an electronic device or any person appearing before a judicial officer in the well of the courtroom if authorized by the presiding judicial officer to use an electronic device in the courtroom." The order also exempts "[m]embers of the Bar or other individuals who are authorized to sit in designated rows of the courtroom (such as pretrial service officers, probation officers, supervision officers, or social workers in court on official business)."

So, the new rules create a class system for electronic devices: the haves and have-nots. And, as I've written before, that's a problem.

But there's an even bigger issue with the new rules. After creating the class system for who can and cannot have and use devices, the order then limits what the "haves" can use these devices for:

If an electronic device is used while sitting in a designated row in a courtroom by a Member of the Bar, pretrial service officer, probation officer, supervision officer, social worker or litigant representing himself or herself, or by a member of the media who is given permission by the presiding judicial officer, the following restrictions apply unless otherwise directed by the presiding judicial officer:

So, what CAN these devices be used for? From the language of the order, it seems that the only permissible use is obtaining information already stored on an electronic device. The prohibition against "transmissions" would presumably keep users from accessing anything via the Internet, or via e-mail. (See this post on the Volokh Conspiracy blog on this issue.)

Violators will risk being removed from the courthouse, as well as criminal and civil fines for contempt.

With more people relying on cloud computing to store e-mail, calendars, and documents, this rule is archaic before it even goes into effect. Or, more likely, those authorized to use such devices will use them to access this material anyway, since it will be difficult, if not impossible, to know where the information is stored: on the device or elsewhere.

Instead of fighting the inevitable, the District of Columbia courts should instead focus on controlling use of electronic devices in ways that matter: to protect the rights of litigants, ensure the integrity and decorum of trials, and guarantee the incorruptibility of verdicts.

(Photo of the Superior Court of the District of Columbia courtesy of Flickr user OZinOH under CC BY 2.0 license.)