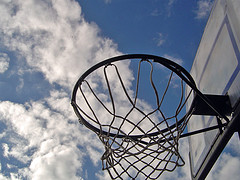 Basketball Wives: Los Angeles lives! And one of the reasons is an athlete's Twitter habit.

Orlando Magic point guard Gilbert Arenas sued in California federal court (complaint) to stop the broadcast of the primiere episode of the VH1 reality show, which the channel touts as featuring "a group of dynamic women with relationships to some of the biggest basketball players in the game."

Two of the women featured on the show are Laura Govan, who broke up with Arenas after having four children with him, and her sister Gloria Govan, who is engaged to Los Angeles Laker Matt Barnes. Gloria Govan was previously featured on another show, Basketball Wives, based in Miami, of which the L.A. show is a spinoff.

Arenas's lawsuit to stop the new show claimed that it would improperly use his name and likeness to imply that he was involved in the program. In order to receive the preliminary injunction he was seeking, Arenas had to show (among other elements) that he was likely to win on his claims, and that he was likely to suffer irreparable harm if the show proceeeded.

While District Judge Dolly M. Gee concluded that the show was likely to include Arenas's name in the context of Laura Govan's prior relationship with him, she noted that Arenas himself had made his relationship with Govan a matter of public concern, by writing about it in numerous messages on his Twitter account (partially archived here after Arenas recently closed his account). Arenas v. Shed Media US Inc., No. CV 11-5279-DMG (C.D. Cal. order Aug. 22, 2011).

She also rejected Arenas's claim that allowing the show to proceed would cause him irreparable harm, citing his guilty plea for carrying a pistol without a license and his tweets stating his views on women, which the court described as "opinions that would be characterized by many, if not most, people as crude and offensive."

Judge Gee also noted that Arenas had tweeted about the show, undermining his claim that his reputation would be injured by an association with the program, and had spoken about his breakup with Govan in a radio interview.

Adding in the harm to VH1 if the show was halted, and the public interest,  Judge Gee denied Arena's effort to stop the program, and granted VH1's motion to strike Arena's right of publicity claim.

So Basketball Wives: Los Angeles lives, and we can now follow the antics of the Govan sisters and the five other women with basketball connections.

But Gilbert Arenas may not be too upset: according to a posting on the VH1 blog, Govan is saying that she and Arenas have gotten back together.

(Photo courtesy of Flickr user laffy4k under CC BY 2.0 license.)

The Ninth Circuit Court of Appeals has affirmed the trial court's denial of the preliminary injunction. Arenas v. Shed Media US Inc., No. 11-56622 (9th Cir. Dec. 20, 2011). Expressing no view on the merits of the complaint, the appeals court held that Judge Gee had not abused her discretion in denying the injunction.

Meanwhile, the show that Arenas tried to block, Basketball Wives: Los Angeles, finished its first season in November, with a second season in the works. Arenas himself became a free agent, and he and Laura Govan are now engaged.