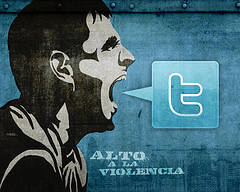 Imagine you live in a country where criminal attacks on civilians are alarmingly familiar, and reliable reporting from the local media is regrettably unfamiliar.  You hear about an attack on your local school, so you take to the Internet to spread the word on Facebook and Twitter to warn people before it's too late.  Mercifully, the report you heard was mistaken, and everything's okay...

...Until the local government comes and arrests you on charges of terrorism.

Welcome to the situation in which Gilberto Martinez Vera and Maria de Jesus Bravo Pagola find themselves in their home state of Veracruz, Mexico.

According to the Los Angeles Times report on the incident, on August 25, 2011, Mr. Martinez, a teacher, and Ms. Bravo, a journalist, heard rumors of an attack and kidnapping by a drug gang at a primary school in the port city of Veracruz (which is located in the state of Veracruz).  Considering the city had already seen a grenade attack at an aquarium that killed a man and injured a woman and two children just days before, it's not unreasonable that they thought these new rumors might be true, and so they tweeted about it.

Naturally, the rumors caused a great deal of panic and confusion among parents - a Veracruz official said that many rushed to school to pull their kids out of classes, and that the chaos led to more than two dozen car accidents.  Fortunately, the rumors were untrue, and all the kids were safe.

But the government of the state of Veracruz was nonplussed by the chaos and they blamed Martinez and Bravo.  Understandable, to be sure.  What is less understandable is that to punish the pair, they reached for the heaviest hammer in their legal arsenal: the crime of terrorism, which carries a sentence of 3 to 30 years, a fine of up to 750 times the minimum wage, and up to 5 years suspended political rights.

Article 249 of the Penal Code of the state of Veracruz describes the crime of terrorismo.  The relevant portion, in the original español:

Though my Spanish is muy malo, the law looks pretty straightforward.  As I understand it (and with no small help from Google Translate), it says that:

Using explosives, toxic substances, firearms, fire, flood, or any other act against the people or public things or services to produce alarm, fear, or terror in the population or some group thereof; to disturb the public peace; or to undermine the authority of the state or to pressure it to act is punishable by three to thirty years in prison, a fine of up to seven hundred and fifty times the minimum wage, and suspension of political rights up to five years.

Assuming that there's no nuance there that I've missed (a big assumption, to be sure), it seems like a huge stretch to apply this to Martinez and Bravo. To be sure, you can't deny that their tweets "produced alarm." (Though it's unclear whether that was their intent, general or specific. Not to mention it's hard for me to tell how much of an element of intent the law's phrasing entails, if indeed it entails any intent at all.)  The only act from the first clause that could possibly apply to them is "any other act against the people," which under the government's reading is so ridiculously broad a concept as to be boundless – reductio ad absurdum.

Where do you draw the line?

I suspect that the government broke out the terrorism charge due to the pair's mention of drug traffickers being involved in the rumored attack – the government was already thinking terrorism, so they made the leap to applying it to Martinez and Bravo. But armed gunmen or other typical terrorist trappings aren't a necessary element to the crime as it's written. What if the pair had tweeted about a fire that they thought was happening at the school?  As an act that induced alarm in the general population, that would still seem to meet the law's definition of the crime of "terrorism."  Would the government prosecute then?

What if there really was a kidnapping or a fire?  After all, tweeting about a real event, instead of a mistaken one, would cause just as much alarm – likely even more so – and would disturb the public peace.  There's no requirement of false alarm or terror in the law, but rather any alarm or terror.  Thus, by the government's reading, tweeting about, say, a grenade attack at the aquarium should rise to the level of "terrorism" too.  One would hope the state wouldn't go so far, but the law certainly encompasses real, alarming reports as much as the mistaken reports at issue here.

And the potential for chilling effects is huge.  Why should anyone share information about possible criminal activities in Veracruz if the state might decide to prosecute you if you're wrong (and could even decide to do so if you're right)?  If the state continues to move its prosecution forward, I'd expect to see a significant drop in these sorts of warnings.

And given the apparent lack of rapid news sources in Mexico, that's particularly problematic.  As economist and active tweeter Roman Cotera indicated to the LA Times, timely information is often unavailable: "Already today, Monday, we've had four dead in the port of Veracruz, and no official information from the government."  So, in a country where crime is rampant, the public is feeling particularly threatened as of late, and news is slow to be transmitted, the government is effectively criminalizing a grassroots means of communication about crime reports. Wise.

Fortunately, Martinez and Bravo are not without their champions in Mexico and abroad.  Supporters have created an online petition to free the pair.  Reporters Without Borders and Amnesty International have chastised Veracruz for the prosecution.  And federal Senator Francisco Castellón Fonseca called upon the government of Veracruz to drop the charges, which he called indicative of "most dark authoritarianism." (Hat tip to Geraldine Juarez of Global Voices Advocacy for highlighting the Senator's stand in her blog.) Once again relying on Google Translate, I gather Senator Fonseca raises much the same concern that Mr. Cotera mentioned above:

[Fonseca] said that in the absence of accurate and timely information from governments, citizens from different parts of the country have made use of the Internet and the benefits this tool provides, to keep informed of the crimes taking place in their states' communities and, as in the case of Nayarit, Monterrey, Chihuahua and Tamaulipas, where citizens, more often, are turning to social networking to become informed and protect themselves from violence.

But it looks like the government of Veracruz is sticking with the prosecution.  Indeed, Governor Javier Duarte himself tweeted that the case is not about tweeting, but about punishing Martinez and Bravo's "irresponsible" actions.