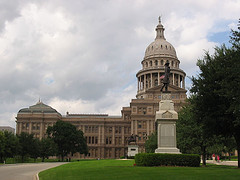 Strategic lawsuits against public participation, or SLAPPs, are one of the most bullying types of litigation out there.  But while the majority of US states have enacted special anti-SLAPP statutes to discourage them, Texas - certainly known for doing things big - is currently considering what could be the strongest anti-SLAPP measure yet.

In simple terms, SLAPPs are used by rich, powerful parties to bully those who publicly criticize them into silence by filing frivolous lawsuits that the critics can't afford to litigate.  Hence, the term "strategic lawsuit against public participation," or SLAPP.  More can be found about SLAPPs in the CMLP legal guide.

A classic example is a frivolous lawsuit brought by a wealthy land developer against a poor environmental advocate critical of the project.  The lawsuit may be utterly without merit and the advocate's criticism may be protected under the First Amendment, but because the advocate lacks the money to fight the developer in court, she's forced to stop her otherwise legitimate speech for financial reasons.

While a majority of U.S. states have anti-SLAPP laws, most of those laws do not expressly grant anti-SLAPP protections to free speech.  Rather, anti-SLAPP laws are generally narrow and restrict use of anti-SLAPP motions to lawsuits arising from petitioning activity directed at the government.  Doing a quick and dirty review of the various anti-SLAPP laws out there, I'd estimate that about half of the states with such laws have them in the narrow variety.

A few states, around a quarter of those with anti-SLAPP laws, sneak some free speech considerations in the back door by extending the idea of "petitioning the government" to include indirect communication.  Under such an approach, activities like blogging about a matter of community concern can be considered protected activities, as they encourage a governmental response to the problem raised.  But they require more legal creativity than lawsuits concerning direct petitions.

The remaining quarter of anti-SLAPP states are fairly overt in their application of anti-SLAPP protection to free speech (though some of those laws define "free speech" more narrowly than its usual, colloquial definition).  Consider California, which permits use of its anti-SLAPP motion in protection of an "act . . . in furtherance of [one's] right of petition or free speech under the United States or California Constitution in connection with a public issue." Cal. Civ. Proc. Code § 425.16 (b).  This includes "any written or oral statement or writing made in a place open to the public or a public forum in connection with an issue of public interest."  Cal. Civ. Proc. Code § 425.16(e)(3).  As a result, the California anti-SLAPP law is quite robust, and a good example of the broad end of the anti-SLAPP spectrum.

Interestingly, the proposed Texas law, HB2793, looks to be just as broad as California's.  As with most anti-SLAPP laws, HB2793 applies to cases involving a party's exercise of their right of petition.  But like California's law, it also provides protection to a party's "exercise of the right of free speech," which the bill defines as "a communication made in connection with a matter of public concern."  Thus, it appears to offer at least as much protection as California's.

And in what may be a step farther than the California version, HB2793 defines a communication as "the making or submitting of a statement or document in any form or medium, including oral, visual, written, audiovisual, or electronic."  California's law wouldn't permit an anti-SLAPP motion in a lawsuit concerning a private email about a topic of public interest - it's not a petition to government, and it's not made in a public forum.  But apparently HB2793 would allow such an anti-SLAPP motion.  That's pretty broad.

Of course, the bill is only just out of committee in the Texas House, as is the Texas Senate version of the bill, SB1565 (which is appears virtually identical to the HB2793).  Both versions could see significant rewrites as they continue to wend their way through the legislative process.  Nonetheless, the fact that both versions left their respective committees with no votes against (10-0 with 1 absent in the House, 8-0 with 1 absent in the Senate) bodes well.

And there seems to be some popular support for the bill.  In an editorial last month, The Houston Chronicle expressed rousing enthusiasm for an anti-SLAPP law, and quoted New York Supreme Court Judge J. Nicholas Colabella, who said in 1992 of SLAPPs that "Short of a gun to the head, a greater threat to the First Amendment can scarcely be imagined."

And The Navasota Examiner reports that the Texas House Committee on Judiciary & Civil Jurisprudence heard from quite a few people who supported the anti-SLAPP legislation, including an author sued by a real estate developer, a newspaper editor who said his paper is threatened several times a month to be hit with SLAPPs, and a homeowner who was sued by a home developer after she organized protests against them.  A report on the anti-SLAPP website Slapped in Texas indicates that the Senate Committee on State Affairs heard from many of the same people.  Slapped in Texas also has a list of additional people hit with SLAPPs, largely from the past few years.

All in all, the signs are encouraging, and if these bills are enacted Texas deserves a lot of praise. With an anti-SLAPP law as beefy as this one looks to be, even this city-slicker yankee has to agree that there's no messing with Texas.

(Image of the Texas State Capitol in Austin, Texas, courtesy of Flickr user fusionpanda licensed under a Creative Commons license.)