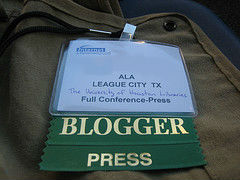 A federal judge's ruling that a blogger was not covered by Oregon's reporters' shield law is being appealed to the Ninth Circuit, and is getting some amicus support from media organizations. But the appeal -- and the amici -- are not addressing the main issue that led to an online uproar over the trial judge's initial decision.

Both the Reporters Committee for Freedom of the Press (where I once worked) and Scotusblog.com, a site that covers U.S. Supreme Court cases in intimate detail, have filed amicus briefs in the case, concerned that the courts not define "media" and "journalist" in such a way that bloggers are not categorically denied coverage by state reporters' shield laws.

As I wrote at the time, a federal judge's decision holding that blogger Crystal Cox was not protected by Oregon's reporters' shield law in a defamation suit against her -- which led to a $2.5 million verdict against her -- was not as dire a threat to bloggers as it was portrayed at the time. The judge -- District Judge Marco A. Hernandez -- did not deny Cox the protection of the shield law primarily because she is a blogger, but because, the court said, she was attempting to claim that there was a confidential source for the information sought by the court and, at the same time, use the existence of that source as evidence that she did not act with negligence in making the blog post at issue. In other words, she was attempting to use the existence of the source – which she refused to identify – as evidence in her defense. This is known as using the reporter’s privilege as both a "sword and shield," and is specifically prohibited by Oregon's shield law statute. See Ore. Rev. Stat. 44.530(3). [Cox disputes this.]

The decision did include problematic language about the application of the shield law to bloggers, even though it was not the basis of the ruling. Judge Hernandez focused on a list in the statute's definition of "medium of communication", and found that bloggers like Cox did not fit under any of these categories. In doing so, he ignored that the statute says that “medium of communication” includes not only the specific media listed, and explicitly states that its coverage is not limited to the listed media.

While this language in the decision was not Judge Hernandez's rationale for his ruling, it got most of the attention. So much so that Judge Hernandez apparently felt the need to respond, which he did in a subsequent ruling (which I also covered) denying Cox's motion for a new trial.

Hernandez also noted in the second decision that Cox had offered "public relations" services – including removal of her blog posts – to the defendants after they complained.  "The suggestion was that defendant offered to repair the very damage she caused for a small but tasteful monthly fee," Hernandez wrote. "This feature, along with the absence of other media features, led me to conclude that defendant was not media."

Cox's appeal of the $2.5 million verdict does not address her status as a member of the media under the Oregon shield law. Instead, it argues that the trial court was incorrect in its ruling of what the plaintiffs who sued her for libel had to show in order to prevail, and that the $2.5 million award was not supported by the evidence.

The Reporters Committee brief argues that the heightened protection provided to journalists, including shield law protection and heightened requirements on plainitffs, should apply regardless of medium. "In light of the recent evolution in the media industry and its shift toward online publication," the brief argues, "this case presents an opportunity for this Court to recognize that nontraditional journalists can claim the constitutional protections of Gertz [v. Robert Welch, Inc., 418 U.S. 323 (1974)] ." But the Reporters Committee brief does not address the specific reasons that Judge Hernandez denied Cox coverage under the shield law.

The Scotusblog.com brief also does not address Judge Hernandez's specific shield law ruling. But it otherwise makes a similar argument as the Reporters Committee brief: that blogs such as Scotusblog.com should receive the same First Amendment protection as other forms of media. "SCOTUSblog respectfully asks this Court to make clear that non-traditional news sources, such as blogs, that provide a useful public service by gathering, analyzing, and disseminating information are entitled to the same First Amendment protections as traditional news media even if they cannot make most of the showings outlined by the district court in this case."

As a blogger myself -- and a free speech advocate -- I agree that bloggers should receive the same First Amendment protection under shield laws and U.S. Supreme Court precedent as other forms of informational media. But while the fact that material is posted online should in and of itself not be a barrier to such protection, not all material posted online is "journalism," and thus should not automatically receive such protection.

Blogs like Scotusblog.com -- and, I hope,my blog  -- are sources of news and commentary that should receive First Amendment protection. But courts considering these cases should look at the purpose and goal of any online site to make a fact-specific determination on this question.

Marc Randazza informs me of a similar case in Florida, where a state court held that a blog is covered by Fla. Stat. 770.01, which requires five days notice "[b]efore any civil action is brought for publication or broadcast, in a newspaper, periodical, or other medium, of a libel or slander ..." That ruling is now on appeal. For details, see http://cominsvvanvoorhis.wordpress.com. [You can also see the CMLP's threat entry on the Comins case here. -- Ed.]