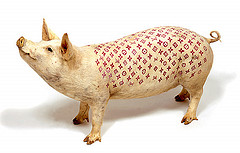 So, have you heard about the little legal scuffle between Louis Vuitton and the UPenn Law School?

The Penn Intellectual Property Group (PIPG), a student organization at UPenn Law, decided to put together a symposium on fashion and IP law, including discussion of the Innovative Design Protection and Piracy Prohibition Act (IDPPPA) that's currently wending its way through Congress.  To promote the event, PIPG put together fliers with a parody of Louis Vuitton's signature pattern that inserted copyright and trademark logos into the pattern: the sort of cheeky tweaking that's common at graduate schools in any field.

Louis Vuitton, however, apparently lacks both a sense of humor and a sense of context.  LV's "director of civil enforcement, North America" responded to the fliers with a cease-and-desist letter accusing PIPG of misappropriation and dilution of LV trademarks and demanding PIPG cease use of the fliers immediately.

I know that LV has a litigious history (see this post by Law of Fashion's Charles Colman for a summary of some of the more egregious episodes), but oy vey.

Now to be sure, LV has a right to protect its trademarks from unlawful use.  No one is denying that.  But to go after a student group for their reference to fashion trademarks in the promotion of an event about fashion trademark protection and infringement shows, as Colman writes, "either a finely honed sense of irony, or none at all."

Among the public relations faux pas in the C&D:

And that's not to mention the rather obvious problems with LV's legal argument, which UPenn's general counsel Robert Firestone systematically dismantled.  Rather than rehash it, I encourage you to check out the UPenn response letter here. Firestone quickly but efficiently demolished LV's infringement and dilution arguments, while refraining from adopting LV's pissy tone.  He even suggested that LV send someone to the PIPG event -- without snarkily insinuating that LV might learn something about IP law by doing so!  (I'm not sure I could have resisted.)

Despite the sturm und drang from LV, I suspect that this all will fade away, as there's too little legal gain and too much PR loss at stake if LV pursues the matter.  Not to mention that UPenn is not lacking for good lawyers.  But hopefully LV will think a bit before sending out any more overreaching, whiny C&Ds.  Go after the actual infringers, Louie.  Leave the fair users alone.