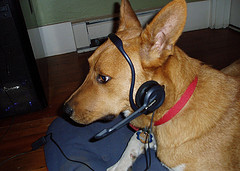 While doing some research on recent media law suits here at the CMLP, I came across a particularly interesting case involving a dispute over the ownership of a Twitter account: PhoneDog, LLC v. Kravitz.

The facts are relatively straightforward. PhoneDog, an “interactive mobile news and reviews resource,” employed Noah Kravitz as a product reviewer, providing him with the Twitter account @PhoneDog_Noah, so he could promote PhoneDog’s services. After his employment ended, Kravitz allegedly changed the handle to @noahkravitz and continued to use the account as his own. PhoneDog alleged in its complaint that, in using the account originally given to him by PhoneDog, Kravitz intentionally obtained and misappropriated confidential trade secrets; that he intentionally and negligently interfered with PhoneDog’s prospective economic advantage; and that he unlawfully converted the account, even after PhoneDog requested he relinquish it.

The case raises some interesting questions of substantive law. PhoneDog asserts that the details of its relationships with its users are confidential, forming the basis of the misappropriation of trade secrets claim. Insofar as PhoneDog’s users also follow its accounts on Twitter, though, the list of followers is publicly available information if the account is not private. Can a list of followers, then, be a trade secret? Additionally, in order to succeed on the interference with prospective economic advantage claim, PhoneDog must prove that the Twitter account is somehow profitable for it. However, it’s very difficult to know with certainty that social media efforts pay off. This marketing professional makes a compelling argument that economic returns on social media for most companies is negative. How, then, can PhoneDog adequately prove economic harm?

Along similar lines, and in my opinion the most interesting aspect of this case, is determination of the amount of damages PhoneDog is seeking. In its complaint, PhoneDog asserted that, “According to industry standards, each Twitter follower is currently valued at approximately $2.50 per month.” Since the account at issue in this case had approximately 17,000 followers, PhoneDog valued the account at $42,500 per month ($2.50 x 17,000); multiplied by several months, this satisfies the statutory threshold for diversity jurisdiction. PhoneDog did not, however, define the “industry standards” used to arrive at this amount, and it provided no further support for the $2.50-per-follower-per-month figure.

In response, Kravitz filed a motion to dismiss for lack of subject matter jurisdiction. He argued that the account in question has no monitory value, but even if it did, it is much less than PhoneDog claimed. Kravitz applied PhoneDog’s value-per-follower to estimate Lady Gaga’s Twitter account at $30 million per month or $3.6 billion per year, based on 12+ million followers. (This would make @ladygaga as profitable as the entire online dating industry.) Using publicly available websites TweetValue.com and whatsmytwitteraccountworth.com, Kravitz estimated the value of the account at $4,380 and $7,705, respectively, well below the statutory threshold. Neither site indicates how these figures are determined.

The discrepancy in estimated damages raises an important business question: How do you put a dollar value on Twitter accounts, or social media efforts in general? Marketing measurement professionals have been losing sleep over this since companies decided that, in an age when consumers are increasingly skeptical of corporate America, two-way social media conversation is more effective than the one-way advertising of Mad Men. Cf. this study by Conversocial. As a result, the use of social media for marketing and public relations has exploded. A quick survey of company Twitter accounts reveals a diverse group of major corporations using the tool. And since social media is free to use, the business practice is likely to continue. As these practices become even more popular in the future, it’s not hard to imagine more lawsuits contesting ownership of social media accounts.

In life before law school I worked at a company that valued public relations efforts, so I know a bit about how they’re measured. Our clients were PR teams that were very interested in demonstrating value, dollar value, to their companies. This may sound like a relatively straightforward proposition. The problem is, PR placements are unpaid and subject to so many uncontrollable variables that it’s nearly impossible to convey the return on investment (ROI) accurately. We had an in-house statistician who developed proprietary algorithms to convert dozens of unique data points into dollar values. But since there’s no real industry standard for how to do this, our methods of determining ROI, and therefore our results, would be different than our competitors’.

So, what does this mean for PhoneDog? It is going to be very hard for PhoneDog to establish accurate damages. In order to answer the question “How much is the Twitter account worth?”, a multitude of factors must be considered, not just the number of followers. If I were suggesting an accurate measurement, I might look at number of followers combined with the average tweets, click-thrus, retweets, mentions, etc., per day. And then create a complicated algorithm to put it in dollar terms. This starts, at least, to give a more accurate picture of how and how often people actually interact with your Twitter account, which is indicative of its value.

But the law generally likes predictability and verifiable amounts. Since Twitter is free to use, PhoneDog wouldn’t have receipts to demonstrate fees lost. Because Twitter accounts can’t be monetized (yet), PhoneDog doesn’t have actual lost profits to show from Kravitz’s use of the account. Any value given to the account is an indirect amount that should equal how much PhoneDog would have made had one of its employees continued to use the account. It’s a measurement of social media ROI. If marketing measurement professionals can’t decide how best to do this, I doubt that even the most convincing lawyer would be able to persuade a jury of @PhoneDog_Noah’s value.

I’m sure PhoneDog feels harmed by Kravitz’s actions. He allegedly stole its Twitter account. If true, his followers were PhoneDog’s followers, and he stole them too. But did PhoneDog suffer economic damages? I doubt it, at least not in any measureable way. Facebook’s expected $100 billion IPO aside, until the social media industry figures out how to value itself, plaintiffs like PhoneDog may face insurmountable hurdles in convincing a court that a free service results in monetary damages.

Lauren Campbell is a CMLP intern and a 3L at Boston College Law School. According to whatsmytwitteraccountworth.com, her Twitter account is worth $32.

(Image used courtesy of Flickr user baldr90 under a Creative Commons BY 2.0 license.)