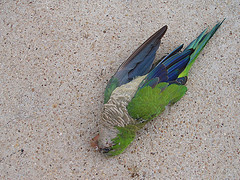 If there is a polar opposite to organizations like ours, it is the intellectual property troll.  And in the IP troll heirarchy, one of the trolliest has long been Righthaven, the self-described "pre-eminent copyright enforcer" that sued hundreds of bloggers and other Internet denizens apparently as part of its business model.  If the DMLP, the EFF, Public Citizen, and the like are the Justice League, Righthaven would be in the Secret Society of Supervillians.

So it is with no small amount of glee I pass along the news that Righthaven appears to have finally run down the curtain and joined the choir invisible.

On Tuesday, Judge Phillip Pro of the U.S. District Court for the District of Nevada signed an order transferring all of Righthaven's intellectual property – some 278 copyright registrations – to a court-appointed receiver, who will auction them off to pay the fees that Righthaven owes its creditors, including defendants who defeated Righthaven in court.  Righthaven owes $186,680 in debts, reports the Las Vegas Sun, but it claims it has no cash to repay them.

Now, it seems dubious that these registrations will be able to offset all of Righthaven's financial obligations.  The general trend in Righthaven's cases is that the purported transfers of copyrights in Las Vegas Review-Journal and Denver Post articles are shams; the Sun notes that eight federal judges in three states have ruled that the newspapers still hold the copyrights and that Righthaven received nothing in the "transfers."  Thus, the registrations may not even be worth the paper they're printed on.  Still, they are nifty pieces of memorabilia from a scourge of copyright law – surely it's worth a few bucks to post one on the wall, like the head of a fearsome beast brought low?

(Friend of the DMLP and "First Amendment fetishist" Marc Randazza, whose firm represented several clients sued by Righthaven, also mentioned to Wired and Ars Technica that "Perhaps those who buy the copyrights could issue DMCA notices to the Review-Journal stopping them from redistributing them?"  I have to say, that would be funny as all get out.)

And it's not just the receivership order that's raining on Righthaven's parade.  Last Friday, Judge Roger Hunt of Las Vegas federal court issued a declaratory judgment in the Democratic Underground's case against Righthaven that the posting of five sentences of a Las Vegas Review-Journal article on the DU website was fair use.  The judgment thereby entitles DU's attorneys, the esteemable folks from EFF, to $119,488 in fees that EFF attorney Kurt Opsahl told MediaPost that they would indeed seek – perhaps even from Stephens Media, the owner of the Review-Journal that greenlit its involvement with Righthaven.

So, in the span of a week, Righthaven both lost all of the "property" it used to fuel its business plan, and racked up yet another significant debt to the lawyers aligned against it.  Given how its been missing deadlines to file or appear in court, this looks to be just about it for America's favorite copyright "enforcer."  Barring a miracle or a successful appeal, Righthaven is an ex-parrot.