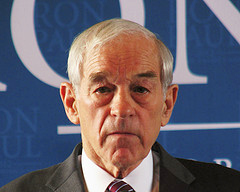 Ron Paul's presidential campaign has been having a rough go of it: He has yet to win a Republican state primary or caucus.  But now his campaign's also-ran streak extends into the courtroom too, in a victory for the right to anonymous free speech.

A California federal magistrate denied the Paul campaign's effort to unmask "NHLiberty4Paul," the anonymous poster of a YouTube video that purported to be a pro-Paul advertisement but, according to the Paul campaign, was actually an effort to smear him.  In a somewhat narrower ruling than free speech advocates would desire, Chief Magistrate Judge Maria-Elena James of the U.S. District Court for the Northern District of California ruled that the Paul campaign had failed to establish a valid complaint under the Lanham Act, as it had been attempting, and thus was ineligible for the expedited discovery it sought to determine NHLiberty4Paul's identity.

Your very own Digital Media Law Project (we'll be switching the website over from our CMLP branding in the coming months) had a personal stake in this one, as we participated as an amicus along with The Public Citizen Litigation Group, the American Civil Liberties Union, and the Electronic Frontier Foundation.

You see, in early January, the Paul campaign sued the poster (along with several other Does) for Lanham Act violations and common-law defamation, and moved for expedited discovery to force Google to unmask NHLiberty4Paul.  (You can read more about the campaign's complaints about the video in our threat database entry on the lawsuit.)  Judge James originally denied the campaign's motion on Jan. 25 using the three-part test from Columbia Ins. Co. v. Seescandy.com, 185 F.R.D. 573 (N.D. Cal. 1999), a cybersquatting case.  In the absence of any representative for the Does, our quartet of amici stepped in to request clarification of the judge's ruling, as it did not take into account the more common standard for unmasking anonymous speakers exercising their First Amendment rights stated in Dendrite International v. Doe, 775 A.2d 756 (N.J. App. 2001).

Last Thursday, the judge issued an order again rejecting the campaign's request, this time including (some) consideration of Dendrite.  Judge James declined to determine which of the tests applied, and instead used the first common element from both: whether the Plaintiff has "establish[ed] that it has filed a valid complaint so the Court can be assured that the alleged claims will withstand a motion to dismiss."  The judge ruled that the Paul campaign had not, writing that its arguments failed to connect the YouTube video to a commercial venture as required by the Lanham Act.  (Indeed, Eric Goldman called the arguments "mockable.")  As such, its trademark claims failed to overcome the first hurdle in both tests, and no further decision as to which test applied was needed.  (Having decided that the federal causes of action failed to state a claim, the court declined to grant expedited discovery on the basis of the remaining state-law defamation claim.  The court also noted that if the Lanham Act claims were dismissed, "issues develop" over the court's ability to exercise supplemental jurisdiction over the state law claims.)

On the whole, the ruling was good, but not great.  NHLiberty4Paul was within his rights publishing his video, and even if it cast Paul in a negative light, the Paul campaign has no right to unmask the NHLiberty4Paul. But the judge's ruling is a missed opportunity to further strengthen the Dendrite standard.  And, as Public Citizen's Paul Alan Levy notes, "[i]mplicit in [Judge James'] ruling is . . . the warning that if the Paul campaign amends its complaint . . . and then renews its application for discovery, she will have to choose among standards and hence look at the evidence."

But on the whole, this was a net positive result.  Hopefully NHLiberty4Paul is sleeping a little easier, wherever and whoever s/he might be.