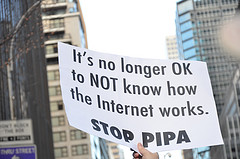 The day of protest against the now (hopefully) infamous "Stop Online Piracy Act" (SOPA) and "Preventing Real Online Threats to Economic Creativity and Theft of Intellectual Property Act of 2011" (PROTECT IP Act, or PIPA) has ended.  Baffled students can once again access Wikipedia to do their homework; the Google doodle is no longer blacked out; and Jon Stewart can return to lampooning Republican presidential candidates rather than obtuse copyright bills.

Actually, no.  It's only just begun.

To be sure, the protest was incredibly successful at drawing attention to the threat that SOPA and PIPA pose to online speech. Google News tracked nearly ten thousand stories on the bills – a number far, far above average for a single news event. Wikipedia's users were shocked into awareness of SOPA and PIPA, thanks to the site's 24-hour blackout. And the tallies on ProPublica's snazzy SOPA Opera page, which tracks Congressional support and opposition for the bills, literally reversed overnight, as members of Congress stampeded from the pro-SOPA/PIPA camp to the anti- side.

But while the public's increased awareness of the bills (and the corresponding pressure they have placed on their Congressional representatives) is welcome, "We're not done yet," as Wikipedia said in a post-blackout statement.  The actual legislative battle over the bills still lies ahead – PIPA comes up for debate in the Senate next week, and SOPA will follow next month in the House.

So netizens seeking to protect the Internet from this legislation must stay aware and active, and not rest easy just because the blackout was a media success. The bills' proponents are still out there (if fewer in number), and they're still "out there."

Former Connecticut Senator and now MPAA head lobbyist Chris Dodd criticized Wikipedia's blackout as an "abuse of power," adding – apparently without awareness of the irony – that "It's a dangerous and troubling development when the platforms that serve as gateways to information intentionally skew the facts to incite their users in order to further their corporate interests."  SOPA sponsor Representative Lamar Smith of Texas – and whose knowledge of copyright law is somewhat suspect – called the blackout a "publicity stunt," and claimed that the bill "will not harm Wikipedia, domestic blogs or social networking sites." PIPA sponsor Senator Patrick Leahy of Vermont, apparently not understanding what the protests are about, avers that "Protecting foreign criminals from liability rather than protecting American copyright holders and intellectual property developers is irresponsible, will cost American jobs, and is just wrong."

And there are still renowned legal sages out there, like the members of the Boston Herald editorial board for example, who are positive that SOPA is meant for "one purpose and one purpose only — to punish the theft of intellectual property on the Web by foreign sites," that "the bill is already heavily weighted on the due process side," and that "cyber-bullies" like Google and Wikipedia should stop throwing a "hissy-fit."

But despite the incisive arguments of these jurisprudential masters — who are in no way biased for being employed by Hollywood (Dodd), being recipients of $100k+ in media campaign contributions (Smith), or being part of the dead-tree media that's desperately scrabbling to recover any revenue it can in the Internet era (the Herald) — there are actually pretty good arguments that SOPA and PIPA are gross infringements of First Amendment rights.

The articles written by the bills' opponents are too numerous to summarize them all, but there are a number of good places to start if you want to know more.  The Berkman Center (which itself does not endorse any particular policy re: SOPA/PIPA, though it encourages members of its community to speak their minds) has compiled a list of the personal responses to the legislation from various Berkfolk. Harvard Law professor and Constitutional expert Laurence Tribe also has offered a rigorous exposure of SOPA's First Amendment violations, and a veritable host of law professors (including several with Harvard and Berkman ties) have signed a letter critiquing PIPA and calling for its rejection.

So now is not the time for opponents of SOPA and PIPA to stand down.  To paraphrase John Philpot Curran, the condition upon which the Internet hath given liberty to man is eternal vigilance.  The blackout did what it was supposed to and drew attention to the legislation, but until the bills are actually torpedoed, we'll have to keep up the pressure.