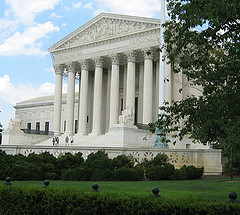 A bit of good news for those of us keen on open government: The Senate Judiciary Committee today voted 11 to 7 to allow television cameras into the Supreme Court.

The text of Senate Bill 1945 is short and sweet. It would insert into the U.S. Code the following line:

The Supreme Court shall permit television coverage of all open sessions of the Court unless the Court decides, by a vote of the majority of justices, that allowing such coverage in a particular case would constitute a violation of the due process rights of 1 or more of the parties before the Court.

Simple, and it could solve the gross misbalance in the importance-to-access ratio of the court. The Supreme Court is all but actively hostile to permanent fixations of its proceedings: no cameras, no television.  Audio only became readily available in 2010.  But it's also the court with the largest pool of potentially interested citizens - its rulings can affect every man, woman, and child in the country.  So why is it easier to film a minor civil trial of no account in the Midwest than it is to record an earthshaking case in the Supreme Court of the United States?

It's time for the court to get in step with the times.  I understand the discomfort that the justices might have, suddenly being on the nightly news.  And the risk of showboating by lawyers and justices, or of becoming the butt of a Daily Show gag is real, no doubt.  It's not hard to imagine what comedians might do with Justice Ginsberg's reported penchant for the occasional in-session nap.  But Sen. Patrick Leahy is right: Even if "they do not want to be made fun of through an unflattering video clip or to be quoted out of context... that happens to the rest of us in public service all the time."

Justice Scalia apparently worries that televised proceedings might mislead the public. "For every ten people who sat through our proceedings gavel to gavel," he cautioned last October, "there would be 10,000 who would see nothing but a 30-second outtake from one of the proceedings, which I guarantee you would not be representative of what we do.” And that's not unreasonable. But the argument doesn't stand up in the modern era.

Thirty-second clips are an artifact of broadcast news, and were an understandable necessity to produce a comprehensive accounting of the daily news in 30 minutes.  Now the media is shifting to an online world, where news is consumed on demand and there are no limits to the size and duration of what's accessed on the Internet.  The solution for Scalia's concern is not less televised coverage, but more.  If every case before the court is recorded and available online soup to nuts, those 10,000 people would have every moment of the proceedings at their fingertips, and would be far less likely to be misled.

(Another problem with Scalia's argument against televised proceedings: He feels a 30-second outtake on the news would mislead viewers, so instead he leaves the description of events up to the broadcasters.  If you can't trust broadcasters to choose a 30-second clip that properly portrays the proceedings, why trust them to explain what happened with only their words and possibly untrustworthy memories?)

There's still a long, rocky path before this bill could become law, of course.  An 11-to-7 vote indicates that getting through the whole Senate could be difficult, and the House could be even tougher to convince. And that's to say nothing about the separation of powers issue.  Can Congress tell the Supreme Court to let the cameras in?

Nonetheless, the fact that the Senate Judiciary Committee has made this step is a positive sign.  The use of technology to increase transparency is worth exploring, and the higher up the officials who are thinking about it, the more likely it is that the government will follow through.