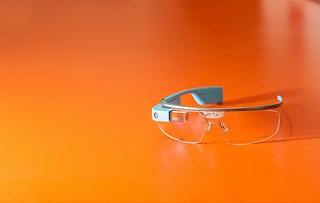 Wearable technology is creeping into society, gradually finding its way onto the street and into the gym, offices, classrooms, and more. Though not yet widely commercially available, Google Glass is at the front of this wearable device trend. The potential uses for Glass are endless, from recording simple home videos to facilitating surgeries to assisting those with physical disabilities. One particularly exciting prospect is the use of Glass by journalists, both in newsgathering and news reporting. Though it might be a stretch to say that Glass will revolutionize journalism as we know it, it certainly has the potential to enhance journalists' abilities and modernize journalism.

Ivan Lajara, a reporter for Digital First Media, was one of the first to envision the use of Glass by journalists. Lajara was invited to join the Glass Explorer program with his vision to "make journalism evolve at the pace that it needs to." As Lajara has observed from his initial months using Glass, "Google Glass can help improve journalism by enhancing live coverage, communication and engagement."

This past July, Chris Barrett recorded what most believe to be the first arrest captured by Glass. On a boardwalk to watch the fireworks, he was able to record a fight that broke out all the way through to the eventual arrest of the participants. Covered by NPR, Barrett's story highlights two particular features of Glass which can make it particularly useful for those engaging in journalism: its inconspicuousness, and its accessibility as a hands-free, voice-activated device. As Barrett posited, "This is a huge step in citizen journalism. . . . If Google Glass takes off, everyone's going to have their entire life captured . . . first words, first steps . . . but also people getting shot, and natural disasters."

A proponent of what he calls "mobile first-person" journalism, Tim Pool has even taken advantage of Google Glass to cover protests overseas. In Pool's words, "I want to show you what it's like to be there as best I can, even if that ends with me running full-speed into a cafe and rubbing lemons all over my face after being tear-gassed." In this way, Pool also revels in the hands-free aspect of Glass. He also notes that Glass is handy for translating, facilitating his interactions with those who speak another language, and has a live-streaming potential, as seen with coverage of Occupy Wall Street. All of these features may make Glass a handy tool for journalists.

An easily accessible, lightweight, head-mounted device, Glass provides journalists with the opportunity to instantly capture moments that other devices may be too slow to capture or in which other devices are too dangerous to use. This can even improve interviewing by eliminating the need for notetaking by hand and allowing for on-the-spot research, and may speed up the process of relating breaking news to the public. In addition, built-in features that allow for quick and subtle Google searches, translations, and more, can contribute to more opportunities and more accuracy in news reporting. The technology even has the potential for collaborative reporting. If Glass becomes compatible with Google Hangouts, we can envision viewers chiming in to streaming discussions with their own point of view footage.

Now, journalists shouldn't get so excited about using this new technology that they forget about applicable state recording law, assuming their videos capture sound. As it currently exists, it may be possible to tell that Glass is recording if: (1) the small screen is illuminated, though this does not distinguish between Glass's recording feature and other uses, and (2) the wearer has either spoken "OK Glass, record" or pressed the touch pad on the side of the frame. (There are some suggestions that Google is considering an LED light or other "very visible" indicator of recording, which would change this consideration.) But if these are the only tells, those wearing Glass can record a video quite easily without those being recorded ever becoming aware of it -- particularly if, due to the novelty of Glass, those recorded are not aware of the device's capabilities. Though this inconspicuousness may be an asset when it comes to capturing video, it also presents a legal danger to the wearer.

Recording laws vary from state to state, so journalists should make sure they are familiar with the applicable state statutes and case law before using Glass to record (check out the DMLP's Legal Guide and the Reporters Committee's Reporter's Recording Guide for state-by-state information). As a rule of thumb, you can rarely record a conversation to which you are not a party, could not naturally overhear, and do not otherwise have the consent to record. Beyond that, a journalist's ability to record audio using Glass will depend on whether the state is a one- or two-party consent state. In one-party consent states, the consent of a single party to the conversation is generally sufficient to make recording lawful. If you are wearing Glass and participating in the conversation, then you may not need the permission of the other participants. On the other hand, in the twelve or so two-party consent states, all parties to a conversation must consent to (or, in states that prohibit secret recordings, at least know about) the recording.

Recordings of some situations may be treated differently, such as recordings of police officers carrying out their duties in public and those of public meetings and court hearings. Some states, such as California and Virginia, also limit their recording laws to situations in which the parties to a communication have a reasonable expectation they are not being overheard.

As journalism schools have begun introducing Google Glass to the classroom and Glass communities are evolving around the use of Glass in journalism, the integration of Glass into this industry seems inevitable. Newsgathering and news reporting practices can be advanced by embracing this new technology, and this exciting trend can modernize journalism practices that have often been criticized for lagging behind the times by failing to adapt in areas from education to professional conduct. With this progress, certain recording etiquette and common practices will surely develop to accommodate privacy concerns, but in the meanwhile, stay alert to the potential consequence of state recording laws and use a bit of caution before jumping into this new technology.

Kristin Bergman is a 3L at William & Mary Law School, where she is researching the use of Google Glass recordings in litigation. She is only slightly embarrassed to admit that the first Google search she ran while wearing Glass was for images of Ryan Gosling.