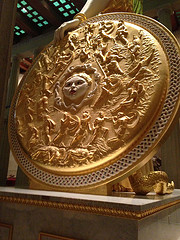 An amended bill passed Sept. 12 by the Senate Judiciary Committee to protect journalists from being forced to reveal confidential sources in federal court includes a relatively broad definition of who would be covered by the law; a definition that would include most bloggers.

As I've noted before, the question of whether bloggers are covered by shield laws has been a prominent one recently. Last month a New Jersey trial court judge published her prior decision holding that a blogger is covered by that state's shield law (h/t Eric Goldman); in May, Hawaii's shield law actually expired after legislators could not agree on its application to bloggers.

Senators had been debating the language of the shield law bill for a while, with many expressing concern that sites like Wikileaks should not be included. In the end, the Judiciary Committee accepted an amendment which would provide coverage under the statute to

"an employee, independent contractor, or agent of an entity or service that disseminates news or information by means of newspaper; nonfiction book; wire service; news agency; news website, mobile application or other news or information service (whether distributed digitally or otherwise); news program; magazine or other periodical, whether in print, electronic, or other format; or through television or radio broadcast, multichannel video programming distributor ..., or motion picture for public showing; with the primary intent to investigate events and procure material in order to disseminate to the public news or information concerning local, national, or international events or other matters of public interest ..."

The amendment also provides that a person is protected if they have held such a position continuously for one year in the past 20 years, or for three months in the past five years.  It also covers student journalists and longtime freelancers.

Finally, the bill would also allow federal judges to "exercise discretion to avail the person of the protections of this Act if, based on specific facts contained in the record, the judge determines that such protections would be in the interest of justice and necessary to protect lawful and legitimate news-gathering activities under the specific circumstances of the case."

The revised bill has been criticized (including here, here, here and here) for having too narrow a definition of who would be covered by the law. And it's true that in addition to the limitations of the definition above, the bill specifically excludes "any person or entity ... whose principal function, as demonstrated by the totality of such person or entity’s work, is to publish primary source documents that have been disclosed to such person or entity without authorization." In other words, Wikileaks, Julian Assange, and Bradley/Chelsea Manning.

But overall the definition provisions are actually awfully broad, and the section giving judges the power to extend coverage of the shield law based on the circumstances of a particular case expands coverage further. And it's certainly an improvement over the original language, which was limited to those employed by a news organization.

Of course, the bill still has a ways to go before it becomes law. Senator Schumer has vowed to push for a vote in the full Senate, there is bipartisan support in the House, and the Obama Adminiistration is supportive. So perhaps soon federal law will provide some protection for journalists from having to testify in court about confidential sources, a protection offered (to a greater or lesser extent) by virtually every state.