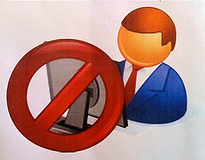 Juror use of the Internet to do research or communicate about trials is a growing and persistent problem. So, what can a judge do? For several years now courts have been giving jurors more detailed admonitions and jury instructions against educating themselves about cases online, to little effect.

A few judges have taken a different approach, ordering web sites with information on specific cases to remove the information from the Internet. But in a pair of recent decisions, appeals courts have said this method of limiting juror online research is an unconstitutional prior restraint.

In Lafayette, Louisiana, several former and current city police officers maintained a website (realcopsvcraft.com, no longer online but archived here) that supported their civil rights lawsuit against the city for allegedly barring them from discussing or reporting what they allege is corruption of the city's police chief. Among the items posted on the site were audio recordings of a meeting discussing possible charges against officers who were in a bar after hours.

A magistrate of the trial court, concerned that the website's content could taint a possible jury pool, ordered the entire site removed from the Internet. He justified his order on the grounds that the web site "not only contain[ed] comments and information that would violate [Louisiana Rule of Professional Conduct] 4.4 [barring attorneys from using material primarily meant to embarrass, burden or violate the legal rights of a third person]," but also because the site "is and has been used as a vehicle by which to disseminate inappropriate information to the media and the public." Marceaux v. Lafayette City-Parish Consolidated Gov't, Civil No. 12-1532, 2012 U.S. Dist. LEXIS 134146 (W.D. La. Sept 19, 2012)

[I]t is clear to this Court that the plaintiffs are prepared to "try this case in the press," and since this involves the entity responsible for protecting the safety and property of the citizens of this division, this Court cannot allow that to happen. The plaintiffs' argument that a change of venue can cure the problem they would otherwise be allowed to create without action by this Court is not only unfair to the defendants who are entitled to get a fair trial in this division, but would result in unnecessary burden and expense to the judicial system. Therefore, this Court will grant that aspect of the defendant's motion dealing with the website and extra-judicial comments to the media.

Id. Despite the order, the recordings are still available online, including here.

[T]he district court erred in concluding that the entirety of the Website was substantially likely to cause prejudice. Accordingly, the court's determination that the entire Website "demonstrate[s] a substantial likelihood of impacting the jury venire," is overbroad and clearly erroneous. As a result, we must vacate the portion of the order requiring the "takedown" of the Website.

Meanwhile, a California appeals court held that a judge's fear that jurors would search for a plaintiff's attorney online and discover her prior victories in similar cases listed on her web site was not sufficient rationale to order the removal of that information.  Steiner v. Superior Court (Volkswagen Group of America), Civil No. B235347 (Cal. App., 2d Dist. Div. 6 Oct. 30, 2013).

Simona Farrise was representing a man who alleged that carmakers' use of asbestos in their brakes systems led to his lung cancer. After jury selection but before trial, the defendants requested that the court order Farrise to remove pages from her website touting victories in two similar cases (one of the pages is here). Thir motion argued that "plainly provocative and prejudicial information should not intentionally be prominently displayed on the internet, by the parties or their counsel in this case during trial." The plaintiffs counted by arguing that such an order would violate Farrise's free speech rights, and that a better solution was to admonish the jurors not to search for the lawyer online.

Superior Court Judge Thomas Anderle agreed with the defendants, and ordered Farrise to remove the pages from he site. (Initially there was apparently some confusion over the scope of the order, and whether it required removal of the entire site.) But the judge also adminished the jurors not to seek or view information about the case online.

The trial proceeded, and the jury found for the defendants (a verdict that was affirmed). After the verdict, Farrise restored the pages to her website. But she also appealed the court order requiring that they be removed.

Initially, the Second District Court of Appeal declined to hear the appeal. Steiner v. Superior Court (Volkswagen Group of America), Civil No. B235347 (Cal. App., 2d Dist. Div. 6 Aug. 23, 2013) (summarily denying petition). Farrise, represented by Sharon Arkin, then appealed to the California Supreme Court, in a petition that (incorrectly) claimed that Justice Perren had ordered that the entire website be taken down. The Supreme Court granted review and transferred the case back to the appellate court with instructions to issue an order to show cause.  Steiner v. Superior Court (Volkswagen Group of America), No. S195913 (Cal. Aug. 31, 2013).

The appeals court first decided that although the matter was moot, the issue was likely to be repeated and thus merited a decision. The court then considered which level of scrutiny it should apply: the "strict scrunity" standard applied to prior restraints or the lesser standard applicable to limitations on commercial speech. But without deciding which standard applied, the court used the latter because if the restriction failed under the intermediate test, it necessarily would also fail under the stricter test. Applying the intermedite test, the court found that the restriction -- the order that the two pages be removed from the website --  was more extensive than necessary to ensure a fair trial. Steiner v. Superior Court (Volkswagen Group of America), Civil No. B235347 , 2013 WL 5819545 (Cal. App., 2d Dist., Div. 6 Oct. 30, 2013).

So courts cannot order material removed from the Internet for fear that it will be found by jurors. Instead, according to both the Fifth Circuit and the California Court of Appeals, trial courts must instead rely on admonishments to jurors not to conduct Internet research. As the California court concluded,

The trial court properly admonished the jurors not to Google the attorneys and also instructed them not to conduct independent research. ... If a juror ignored these admonitions, the court had tools at its disposal to address the issue. It did not, however, have authority to impose, as a prophylactic measure, an order requiring Farrise to remove pages from her law firm website to ensure they would be inaccessible to a disobedient juror. Notwithstanding the good faith efforts of a concerned jurist, the order went too far.