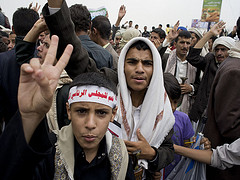 Last week the Online News Association's annual conference came to Boston.  Naturally, many prominent news organizations showed up, tchotchkes in tow, to woo attendees – including Reuters, MSNBC, NPR, and CNN among many others.

But of all the exhibitors attending the conference, I'd like to drop a bit of praise on Al Jazeera, and not just because they were giving away really nice keychains.  While poking around their site and materials at the conference, I discovered that Al Jazeera has been offering up video, photographs, and even full-fledged blog articles for public use under Creative Commons ("CC") licenses since January 2009.

This is a truly excellent thing.

Now, Al Jazeera has been much reviled in the US over the years as somehow being an unofficial mouthpiece for jihadists, and even saw its Kabul and Baghdad offices hit by US missiles, killing a staffer.  And that's not to mention President George W. Bush apparently threatening to bomb its Doha, Qatar, headquarters in what was hopefully just a bad joke. Heck, it's still viewed with suspicion in parts of the US, as an Al Jazeera English ("AJE") reporter recently found out in Texas.

But those still nursing a misguided grudge against Al Jazeera really ought to take a second look, because they're missing a solid source of news in a part of the world where none has existed before.  During the Arab Spring uprisings in Tunisia and Egypt, AJE was the place to go for news.  You couldn't find decent coverage in the US press; the only Western-based, English-language outlet to do the Arab Spring justice was the BBC – where, incidentally, a whole lot of AJE employees used to work.  But Al Jazeera reporters were on the ground and in the thick of it nearly from the get-go in Tunis, Tahrir Square, and Tripoli, providing a clear, no-spin picture of what was happening.  And they still are – if you want the latest from Syria, Al Jazeera's live blog is the best place to go.

Of course, you'll have to stick to Al Jazeera's online offerings if you're in the US.  US cable providers have proven sadly reluctant to put AJE on the air.  Indeed, AJE is only available in four cities in the entire US: Washington, DC; Toledo, Ohio; Bristol, Rhode Island; and Burlington, Vermont.  New York City will be getting it soon, but AJE is still encouraging aspiring US viewers to email their cable providers requesting the channel.

It is the combination of the uniqueness of Al Jazeera's coverage, the importance of the Arab Spring, and the nearly complete inability to watch AJE in the US that makes Al Jazeera's commitment to Creative Commons so important, laudable, and just plain smart.

By offering up its material through CC, Al Jazeera is enabling others to take advantage of its access to expand their own coverage for simple share-alike and attribution. Joe Blogger in the US (much like Mohammed Blogger in the Mideast) can now mold great footage/photos/commentary into their own without any copyright concerns.  Can you imagine Fox News or MSNBC doing the same?

Moreover, it allows AJE to ameliorate cable providers' intransigence by getting its material into viewers' hands (or rather, eyeballs) branded but free - showing them what they're missing, and encouraging them to seek Al Jazeera material out in the future.  It's an approach that anyone who supports freedom of information should appreciate.

So kudos to Al Jazeera.  I hope other news outlets follow their lead and embrace Creative Commons and other public-minded licenses.  The public – be they in Boston or Bahrain – can only benefit.

(Image of pro-democracy protesters in Yemen courtesy of Al Jazeera licensed under a CC BY-ND 2.0 license.)