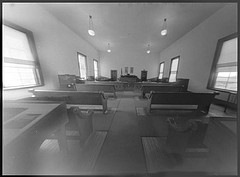 After a slow start, the latest experiment of video cameras in federal courtrooms, announced last October, appears to be finally starting to roll.

The first recording of a proceeding recorded under the experiment, a preliminary injunction hearing in Gauck v. Karamian, Civil No. 11-2346 (W.D. Tenn. filed May 4, 2011), was posted in July. Since then, four of the fourteen federal trial courts authorized  to record civil proceedings under the experiment have posted recordings of six cases online.

Besides the Gauck case – in which a television news reporter sued a racy web site for misappropriation over its alleged use of her name, and eventually settled after the preliminary injunction was denied – the recorded proceedings include the following:

These cases are from only four of the fourteen courts approved for participation in the courtroom camera experiment. So, what about the other courts? Here is the status of the cameras experiment in the ten federal district courts in the program in which no trial proceedings have been recorded and posted online:

The experimental program is the newest chapter in the long saga of the issue of camera coverage of federal trial courts, and is the second such test in the federal courts (the first occurring in the early 1990s).


The experiment will continue for up to three years, with the Federal Judicial Center producing interim reports at the end of its first and second years and a final study of the program at its conclusion.

Even after all the courts in the experiment are revved up, the experiment's limitations will mean that the number of cases that are recorded and posted will probably be few. Then, only time will tell if this experiment finally leads to federal courts being open to regular camera coverage, or if it will be just another short period of openness before cameras are once again left outside the courtroom doors.