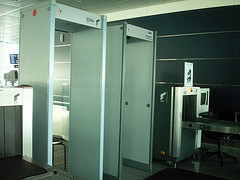 In a press release announcing the new policy, Evans cited concerns that people attending court proceedings were using cellphones to photograph – and intimidate -- witnesses, judges, jurors, and prospective jurors, to relay courtroom testimony to upcoming witnesses, and to stream judges’ comments during trial. “The court is sending a strong message to gang members and others that any attempts to intimidate witnesses, jurors, and judges in court will not be permitted,” Evans was quoted saying in the release. “The ban will help to ensure that justice is properly done by preserving the integrity of testimony and maintaining court decorum.”

The ban will apply to 12 of the 13 courthouses in county. The exception will be the Richard J. Daley Center Courthouse in Chicago, which handles civil, traffic and misdemeanor cases.

Under the order, members of the news media are exempt from the ban, and will be able to use electronic devices in courtrooms under the circuit court’s pending application for to participated in the extended media coverage experiment authorized by the Illinois Supreme Court. See In re: Extended Media Coverage in the Circuit Courts of Illinois on an Experimental Basis, M.R. 2364 (Ill. Jan. 24, 2012).

Others exempt from the ban include current or former judges; licensed attorneys; all law enforcement officers; all government employees; persons reporting for jury service; jurors (subject to the authority of the trial judges); building and maintenance workers, and equipment repair persons and vendors. But their use of the devices will be limited to public areas of the courthouses.

Individual judges may also issue orders allowing others to bring electronic devices into the courthouse, and may also opt to allow the devices to be brought into and used in their courtrooms.

The courts obviously need to be concerned about safety, the integrity of court proceedings, and decorum. But the new order is a broad hatchet, when a scalpel would have been more appropriate.

The overall effect of Cook County's new rules on electronic devices, like similar rules in other courts (D.C. Superior Court, Southern District of New York), is create a class system of  "haves" (members of the media, lawyers, judges, etc.) and "have nots" (everybody else). In a building devoted to equal justice under the law.