(This piece is co-authored by Jeff Hermes and Andy Sellars) 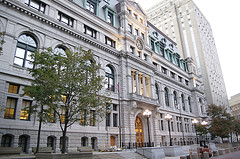 The DMLP is pleased to announce that the Massachusetts Appeals Court has ruled in favor of the result we advocated in an amicus brief in Jenzabar v. Long Bow Group, Inc.

For more background you can visit our earlier releases about the case, but in quick summary: the case concerns Long Bow, a documentary film company that released a film concerning the Tienanmen Square protests. The film is critical of many of the student leaders, including a protester named Ling Chai. The film company created a website related to the film, which, among other things, criticized Chai on a particular webpage. As Chai had since moved to Boston and co-founded an educational software company called Jenzabar, the page was titled "Jenzabar," and included terms related to Jenzabar in the metadata.

After the website was published, Jenzabar sued Long Bow for various trademark claims, as well as for defamation and trade libel. (The trade libel and defamation claims were later dismissed.) The Massachusetts Superior Court for Suffolk County granted summary judgment in favor of Long Bow on the remaining trademark claims, applying the traditional "likelihood of confusion" test. On appeal, Jenzabar argued that the court improperly granted summary judgment because it did not adequately focus on a particular type of confusion, "initial interest confusion." According to Jenzabar, the use of their name in the title tags and metadata was sufficient to cause the average viewer to temporarily visit Long Bow's webpage by accident, and that alone should be recognized as grounds for trademark infringement.

In our amicus brief, the DMLP expressed serious concerns about the plaintiff's claims, and argued that applying a traditional trademark analysis does not make sense when the defendant is using the plaintiff's trademark to say something critical about the plaintiff. Trying to shoehorn expressive uses into a standard "likelihood of confusion" analysis only results in tortured interpretations of the relevant factors, while creating protracted and costly fights that lead to unnecessary self-censorship. The DMLP also argued that the defendant has a First Amendment right to use the metadata of a website to increase the website's public accessibility, noting that the public has a constitutional right to receive such information. Finally, the DMLP noted that modern Internet realities make the "initial interest confusion" doctrine wholly inappropriate in cases like this one, where Internet users expect and employ search engines to find all relevant information about a party, not just the party's own website or approved material.

The opinion affirmed summary judgment for Long Bow, but for more narrow reasons than the DMLP hoped. The court did not take the opportunity to reject initial interest confusion on the Internet or apply a standard other than "likelihood of confusion" to claims based on critical speech.

Instead, the court applied a subspecies of likelihood of confusion test drawn from one Ninth Circuit case and one District of Massachusetts case, focusing on (1) the similarity of the parties' goods; (2) the level of care exercised by the relevant purchasing public; (3) the strength of the plaintiff's mark; (4) the defendant's intent in using the plaintiff's mark; (5) evidence of actual confusion; and (6) the visual appearance of the link or advertisement in context on the screen. The court ultimately found that factors favored Long Bow on all except (3) and (6), which according to the court were less relevant. The court also quickly disposed of Jenzabar's trademark dilution and state unfair competition claims.

There's a lot of great material to pull out of this opinion. The gist of the trademark infringement claim is summarized and disposed of wonderfully in this small excerpt from the court's analysis of Long Bow's intent:

Given that Long Bow's site actually contains information about Jenzabar and does not sell goods that compete with Jenzabar, the most natural inference arising from Long Bow's use of the word "Jenzabar" is not of intent to confuse but rather of intent to accurately describe the page's contents, and to bring it to the attention of Internet users searching for information about Jenzabar, who would find it relevant to their search.

The court also does a fantastic job disposing of the dilution claim, noting quite correctly that application of the dilution doctrine is wholly inappropriate, because "Long Bow's use of the JENZABAR mark does not dilute that mark's 'distinctive quality,' i.e., its link in the minds of consumers only to its owner. Instead, Long Bow's use actually tends to reinforce that quality, since Long Bow uses the mark only to refer to Jenzabar itself."

The court further raised the excellent point that web searches for a trade name cannot be assumed to be evidence of an attempt to reach the trademark holder's website, because (as we noted in our brief) use of a trademark as a search term could equally suggest that the user was looking for information about the company, instead of the company itself. We were also very happy to see the court's note that damage to business reputation is wholly irrelevant, because reputational harm is "not a trademark harm."

But by choosing to approach the trademark infringement question in the way that it did, the court perpetuated certain problems that we flagged in our brief. Applying the standard infringement factors to critical speech forces to the court to come to some awkward conclusions about how the factors should apply, and leaves open some potentially odd results in future cases. This analytic tension in applying a likelihood of confusion analysis to critical speech permeates the majority’s analysis. Some highlights follow below:

Similarity of the parties' goods: This is a classic factor in trademark infringement analysis, and when applied to two market rivals using similar marks to sell their goods it makes a great deal of sense: the more similar the goods are, the more likely a consumer may be confused looking at those goods. But here the application makes no sense whatsoever.

The court here notes (quite correctly) that Jenzabar sells educational software systems and Long Bow makes documentary films. Those two fields are unrelated, and thus the court held that this factor favors Long Bow. That is convenient for Long Bow, but in this context it is irrelevant. Consumers looking at critical speech are not any more likely to be confused as to the origin of the speech because it comes from a market competitor. To hold this as relevant is to say that Reed Elsevier or the New York Times would be more successful in attacking critical speech on trademark grounds, because those publishing criticism usually do so at media and publishing companies.

Strength of the plaintiff's mark: As the court notes, in a more typical trademark case this factor would favor Jenzabar on summary judgment, because the mark is fanciful and (according to Jenzabar) has accrued significant reputational value. But the court then turns this factor on its head, holding that because Long Bow is engaging in speech about Jenzabar itself, the strength of Jenzabar's mark does not increase the potential for confusion:

In particular, this factor’s significance is diminished by the fact that Long Bow’s site actually does contain information about Jenzabar rather than, for example, linking to a competing or similar product. … An Internet user who runs a search even for an extremely strong trademark may be searching for information about the mark’s holder rather than for the mark holder’s official Web site. A search result leading to a third-party Web site that contains such information thus may not be confusing at all.

Other courts have similarly held that the “strength of the mark” has a completely different impact when considering critical or descriptive speech. See, e.g., Smith v. Wal-Mart Stores, Inc., 537 F. Supp. 2d 1302, 1335 (N.D. Ga. 2008) (noting that “a parodist must use at least some of the mark he criticizes” and that use of a strong mark makes a parody more recognizable); Century 21 Real Estate Corp. v. Lendingtree, Inc., 425 F.3d 211, 225 (3d Cir. 2005) (noting the “need to use the actual mark to describe the plaintiff’s product because of its very strength and what it has come to represent”). And to be sure, we agree with the logic of the majority’s opinion.

That said, the fact that the court flipped this factor of the likelihood of confusion analysis upside down in order to apply it to Long Bow’s website, and mechanically considered factors such as the similarity of goods that are logically irrelevant, further demonstrates that the traditional test is simply ill-suited to cases involving critical speech.

These are just a couple of examples of why the "likelihood of confusion" test has no role to play in critical speech cases. On a broader level, the whole concept of initial interest confusion is based on the premise of consumers using trademarks as a method of locating authentic goods and services, and the potential for unscrupulous competitors to divert those consumers to other goods by mislabeling the signs that they follow. Given the court’s proper acknowledgment that those using a search engine cannot be presumed to be looking only for authorized and properly branded results, the applicability of the initial interest confusion doctrine quickly breaks down.

Furthermore, we remain troubled by the application of initial interest confusion in the Internet context at all. Instead of serving as a method of protecting consumers, application of the doctrine to the Internet becomes a form of brand protection akin to trademark dilution law, but without the limitations that dilution law recognizes (and that the court applied to Jenzabar’s dilution claim) to protect critical speech using trademarks. As such, it would have been preferable for the court to reject the application of the doctrine outright.

We suspect that we'll be hearing of an appeal to the Supreme Judicial Court in this case, which will give the parties another chance to address these and other concerns. We remain very happy with the result of this case, and greatly appreciate the court's acknowledgment of our brief and the issues it addressed. And on that point, the DMLP would once again like to thank the invaluable assistance of Harvard's Cyberlaw Clinic, especially Clinic and HLS students Michael Hoven and Andrew Pearson and the Clinic's Assistant Director, Chris Bavitz.

Jeff Hermes is the Director of the DMLP. Andy Sellars is a Staff Attorney at the DMLP.