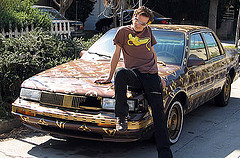 From the ever-growing file of trademark cases that are bad for free speech, Eric Goldman and Techdirt bring us an interesting case concerning a recent Hyundai ad. The ad is a series of brief vignettes conveying luxurious items in non-luxury settings: a yacht parked next to a small suburban ranch house, cops in a squad car snacking on caviar, chandeliers for streetlights, lobsters and roast pigs in what looks like an office breakroom, and – most importantly for our purposes – a group of people playing basketball with a ball that appears to have what Louis Vuitton calls its "Toile Monogram" pattern on it. Baroque music plays throughout, and a sonorous voice asks the audience, "What if we made luxury available to everyone? Would it still be called luxury? Or maybe we'd need a word for it. Oh, here's one: 'Hyundai.' The all new Hyundai Sonata."

Get it? The ad asks us to ponder whether luxury is defined by its exclusivity to an upper caste, or whether we can all experience the creature comforts of "luxury" regardless of social strata, when a vendor makes high-quality goods at a convenient price point. (Also, buy our car.)

As this blog noted as recently as last month, Louis Vuitton is notoriously aggressive in trademark enforcement. This was no exception. The company brought suit in the United States District Court for the Southern District of New York, alleging a variety of trademark violations.

Last July, Louis Vuitton moved for summary judgment as to Hyundai's liability under state and federal trademark dilution law. Trademark dilution is different from standard trademark infringement. Dilution grants a superior exclusive right to owners of "famous" marks to control its use in all commerce. This right is intended, in part, to protect the single meaning that famous marks have globally. For example, an average consumer will know when they see Kodak-brand sneakers that the camera company didn't make the sneakers, but now when the consumer hears the word "Kodak," they won't know if the speaker is referring to cameras or sneakers. That extra step is the harm that dilution law seeks to remedy. (If you're unfamiliar with trademark you may want to review the CMLP legal guide posts on the topic.)

Trademark dilution as a theory is controversial, to say the least. It's no accident that the doctrine was first proposed in the United States in a 1927 law review article and not enacted federally until 1995. A common worry is that giving broad protection to prevent uses of marks when there is no evidence of consumer confusion will lead to censorship of any unauthorized communication bearing the mark of a famous company. (Goldman quite rightly borrows Lessig's term of "permission culture" to articulate this fear in the context of this case.) But Congress was careful when it enacted dilution federally to be sure it would not be used as a tool to silence expressive uses of others' trademarks. The law specifically states at 15 U.S.C. § 1125(c)(3) that:

The following shall not be actionable as dilution by blurring or dilution by tarnishment under this subsection:

(A) Any fair use, including a nominative or descriptive fair use, or facilitation of such fair use, of a famous mark by another person other than as a designation of source for the person’s own goods or services, including use in connection with—

(B) All forms of news reporting and news commentary.
(C) Any noncommercial use of a mark.

That's a surprisingly direct carveout in a section of law that is normally frustratingly silent on expressive uses. Note its open phrasing. The statute protects "any fair use … including use in connection with" comparison and comment or parody, adopting all of the standard free speech defenses in trademark law, and then further protects all news reporting and all noncommercial uses (which, as the CMLP recently articulated in an amicus brief on the topic, rarely should be governed by trademark law, even under the traditional infringement framework).

Looking at this in a vacuum, the case for Hyundai seems pretty easy: The use of the Toile Monogram was nominative fair use – Hyundai sure looks like it is referring to Louis Vuitton to me. Louis Vuitton is a brand associated with luxury, so putting the brand on a basketball was achieving the same ends as putting the yacht next to the ranch house: it juxtaposed symbols of luxury with symbols of everyday life.

So it may surprise you to learn that Southern District granted Louis Vuitton's motion for summary judgment, even in the face of this broad exclusion for expressive uses. How did this happen?

For starters, Hyundai did not embrace the fact that they were referring to Louis Vuitton directly, as I mentioned above. Instead, they tried to avoid that association by arguing that their design (which slightly differed in small respects) worked to "genericize" the Louis Vuitton logo, as if any old brown-and-gold monogram would convey luxury. This, sadly, seems to be an illustration of the chilling effect that occurs when content creators (falsely) believe they have to get permission for any direct use of a trademark. Hyundai appears to be afraid of the consequences of saying that they copied Louis Vuitton's design, so their marketing executives and ad managers claimed that they were not trying to directly evoke Louis Vuitton or comment on them specifically. Judge Castel then, quite understandably, used their words against them when Hyundai later attempted to claim that their use was protected by the exception for parody, criticism, and comment under § 1125(c)(3)(A)(ii).

Even so, I do not think this is the right result in this case. The court is improperly myopic when it comes to interpreting § 1125(c)(3). Rather than looking at any fair use defense, including a parody or comment of the original, the court seems to read in the "parodying, criticizing, or commenting" limitation into 1125(c)(3) as a whole.  This limits the scope of nominative fair use rather substantially. Nominative fair use can arise whenever the defendant is using the plaintiff's marks to refer to the plaintiff; they do not need to lob commentary or criticism in the process. This would also prohibit a defense for all descriptive fair use, as that doctrine always concerns use of a trademark in a way that does not discuss the markowner, let alone parody, criticize, or comment on them.

The court also notes that this is more of a "satire" than a "parody," and thus not a fair use. If this "parody/satire" analysis sounds familiar, it's because of its use as a common heuristic to analyze fair use in copyright. But fair use in trademark and fair use in copyright start from different positions, and a court should not use one to color the other.

In copyright, a defendant claiming fair use is arguing that even though they are causing the harm that copyright seeks to prevent – i.e., engaging in an unauthorized use of another's work – public interest and the greater purposes of copyright law command that we tolerate this harm. In this context, courts have held that a "parody"  (a work that makes fun of the original work or its creator) has greater social utility than a "satire" (a work that employs a work to make fun of something else entirely).

Given this, the "parody/satire" distinction makes no difference. Either way, the use would be a nominative fair use, understood to refer to the mark's owner directly. As the Fourth Circuit noted in another recent case concerning Louis Vuitton and trademark dilution, "[e]ven as [a defendant's] parody mimics the famous mark, it communicates simultaneously that it is not the famous mark, but is only satirizing it."

(This approach, by the way, is not entirely the Southern District's fault. The Second Circuit in Harley Davidson v. Grottanelli adopted the "parody/satire" analysis for trademark, citing the copyright case of Campbell v. Acuff-Rose and the widely-panned trademark case Deere & Co. v. MTD Products, Inc.)

The effect here is rather profound. Louis Vuitton can penalize Hyundai for using their mark in an ad, even when confusion is absent and actual damage is unlikely. Talk about luxury.

Andy Sellars is a staff attorney at the Citizen Media Law Project and a fellow at the Berkman Center for Internet & Society.

(Image of car, which is not a Hyundai, courtesy of Flickr user Sterin licensed under a CC BY-NC-ND 2.0 license.)