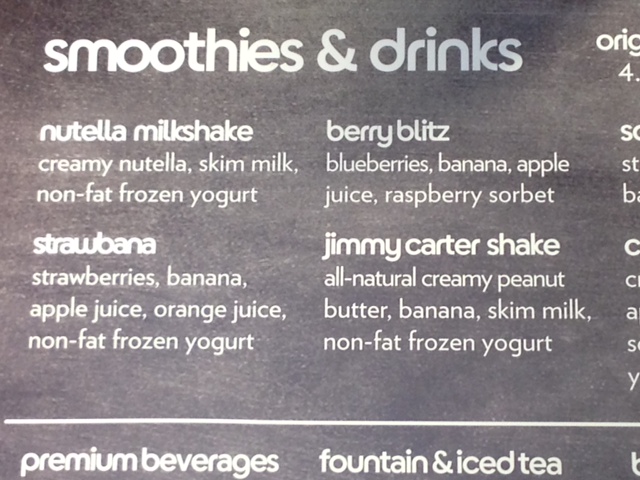 In the Tip O'Neill spirit of all politics being local, here's an interesting trademark story from right down the road from our office:

Anyone who went to college in Boston over the past decade probably knows Boloco, a local wraps-and-smoothies chain with locations at or near most of the colleges in the metro-Boston area, with scattered other locations at other college towns in New England. Among the shakes and smoothies that Boloco sells is a "Nutella Milkshake," made with Nutella, skim milk, and frozen yogurt. The picture included with this post is taken at Boloco's Harvard Square location, and shows how Boloco advertises the shake on their menu board. (And yes, it is as delicious as it sounds.)

Boloco CEO John Pepper sent a Tweet yesterday saying, "After 14 yrs as their faithful advocate, Nutella's lawyers have sent us an immediate cease & desist on the use of their name." According to subsequent reporting by the Boston Herald, the dispute appears to be over the use of the word "Nutella" in the name of the milkshake, because, according to Pepper, "[t]hey don’t endorse the use of Nutella or the Nutella brand in frozen beverages." Nutella says that Boloco can continue using the product, but cannot use the name.

By allowing companies to do this trademark law fulfills an important consumer-protection function: because unauthorized uses of marks on goods and services are removed through litigation, when you see a particular brand name on a product you can safely assume that the product comes from the company popularly associated with that brand name. (Imagine how hard it would be to live in a world with a dozen different Coca-Cola-brand sodas, each coming from a different company with different ingredients and quality control measures.)

An unfortunate consequence of this monopoly, however, is that we often see trademark law used for purposes other than its consumer-protection origins. This blog has brought you past stories of companies suing websites critical of the company for trademark infringement, companies using trademark law to try to stop websites from linking to the company, and companies using trademark law to stop joking references to their products. Our legal guide has an extensive section about using the trademarks of others in the context of reporting and criticism. As Prof. Bill McGeveran's excellent article on the subject notes, courts generally have been good about rejecting these overreaching claims, but not always, and the ones that get it right usually only do so after a long and costly discovery process, making many of these victories Pyrrhic at best.

The issue here is a little different. Instead of simply making a nutellasucks.com website or using the brand name Nutella in a blog post about the company (ahem), what Boloco is doing is using the Nutella name to correctly note that the Boston milkshake contains some of the famous Italian hazelnut spread in it.

Courts have long confronted this unauthorized-but-accurate use of another company's name. In a 1924 Supreme Court case the court considered a New York company that took a French company's cosmetic powder, blended it with a binding agent, and sold it as a compact including both the New York company's and French company's names on the packaging. The Supreme Court allowed the defendant to do this, provided that the defendant include a prominent disclaimer that the district court in the case initially imposed, informing the public that the two companies are not affiliated. Writing for the majority, Justice Holmes observed:

[W]hat new rights does the trade-mark confer? It does not confer a right to prohibit the use of the word or words. It is not a copyright. . . . A trade-mark only gives the right to prohibit the use of it so far as to protect the owner's good will against the sale of another's product as his. . . . When the mark is used in a way that does not deceive the public we see no such sanctity in the word as to prevent its being used to tell the truth. It is not taboo.

Many courts have adopted this case's approach to this question: you can use the trademark so long as you are not misleading the public into there being an affiliation between you and the company, other than your use of the company's product in your product. For example, a 2004 case from the Southern District of New York allowed a company that makes tuna salad display on the lid of its container – in letters about as large as the company's own brand name – that the salad was "Made with Bumble Bee Tuna," over objections from the famous tuna company.

This is a question of facts, and if this went to trial the lawyers for Boloco and Nutella would spend thousands upon thousands of dollars hiring experts to conduct surveys to discern whether the Boloco sign photographed above suggests a level of sponsorship beyond the presence of Nutella as an ingredient in the milkshake in the eyes of the consuming public.

Context here is quite relevant. A local-but-growing chain like Boloco is an uncomfortable position between a major food franchise (where the average consumer will probably expect any use of another's brand name to be licensed) and a small independent store (where a consumer doesn't expect a mention of Nutella to come with the blessings of a major Italian corporation). It also matters what type of food we're talking about, as some foods mention ingredients by brand name more often than others (use of a branded liquor in the name of a cocktail at a bar, for example, is quite common and doesn't typically suggest any further sponsorship).

But I don't think we'll see this case go that far. Boloco has indicated in Tweets that negotiations with Nutella broke down, they aren't interested in a big legal fight, and are publicly considering new chocolate-hazelnut spreads to take the place of Nutella in their milkshakes, complete with photographs of jars of competitor spreads.

And that leads me to the question that I can't escape: Why did Nutella do this?

I understand a need to protect a brand to ensure quality. I can see this as a precursor to Nutella entering the milkshake market themselves, a bit like how Craigslist sued websites that mapped Craigslist apartment listings before releasing their own mapping interface. It's an uncertain battle, but I could even see Nutella winning a case like this if they can convince the jury to see an endorsement buried in that menu listing.

But when I was in Boloco today (field research!) I couldn't help but see the dozens of jars of Nutella in the back, and thinking about the dozen-or-so other locations around Boston with similar stacks of Nutella jars. Those will be replaced by a competitor's product, in a chain that seems to be growing with each passing month. Not to mention the thousands of Bostonians who have heard about this case and will naturally root for the local guy; you get the feeling that this whole experience is going to leave a bitter taste in their mouths.

Andy Sellars is a staff attorney at the Citizen Media Law Project, and a fellow at the Berkman Center for Internet & Society. He secretly hopes that the next trademark dispute concerns JP Licks, so he can do some more field research. And a hat tip to Universal Hub for sharing the story.

(Photograph of the menu board at the Harvard Square Boloco by the author, and licensed under a Creative Commons Attribution-Noncommercial 3.0 US license.)