There are federal, state, and local court systems in every state. For example, if you are in New York City, there is a federal district court (the United States District Court for the Southern District of New York), a state trial court of general jurisdiction (the New York Supreme Court, New York County), and city courts (like the New York City Civil Court and the New York City Criminal Court). These different court systems may have different rules regarding access to court proceedings and court records. See the Access to Courts and Court Records section for details.

The federal court system is split into three levels: the U.S. District Courts, the U.S. Courts of Appeal, and the U.S. Supreme Court. 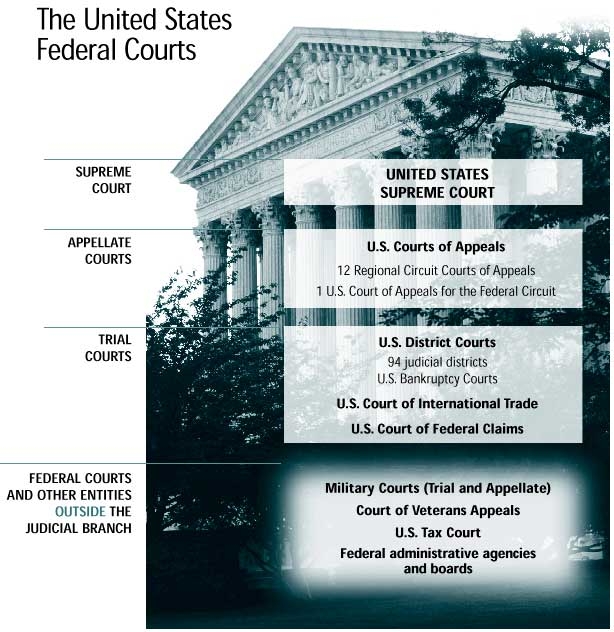 If you are not dealing with a federal court, then in all likelihood you are dealing with a state court. There is great diversity in the names of the state courts, both at the trial and the appellate level. Luckily, an excellent Wikipedia article lists the names of and provides links to the trial, intermediate appellate, and highest courts of all fifty states, the District of Columbia, and the U.S. territories and protectorates. If you want to confirm the accuracy of this information, you could check it against State Court Sites from an organization called State and Local Government on the Net. (Incidentally, this website can help you find the websites of a huge number of federal, state, and local government bodies, in addition to courts.)

As noted, local courts exist in many counties, cities, and towns. You'll probably know them by their name ("county court," "city court," and the like) and by their location in the county courthouse or similar local building. You can always call the clerk of the court or contact a local lawyer for clarification.

Information in this guide is based on general principles of law and is intended for information purposes only; we make no claim as to the comprehensiveness or accuracy of the information. It is not offered for the purpose of providing individualized legal advice. Use of this guide does not create an attorney-client or any other relationship between the user and the Digital Media Law Project or the Berkman Center for Internet & Society.