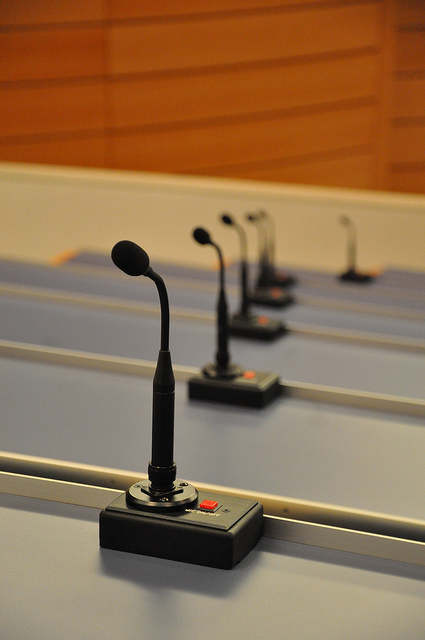 In his article for The New York Times "Room for Debate" feature on whether courts should eliminate human court reporters (spurred by the chaos caused by the recent resignation of a drug-addicted court reporter in New York), U.S. District Court Judge Richard G. Kopf casually mentions that proceedings in his court in Lincoln, Nebraska, are routinely audio recorded. The recordings are posted to the court's public online PACER database the same day.

PACER, short for Public Access to Court Electronic Records, is the federal courts' online case docket access system. Access to PACER requires registration, and fees are charged for accessing materials in the database.

On his blog -- a federal judge with a blog! -- Kopf explained last year that his court had been recording its proceedings "for a long time now," i.e., since 2007.

After an initial one-year test of audio recording technology in 12 federal district and bankruptcy courts, the U.S. Judicial Conference approved digital audio recordings as a method of taking the official record of court proceedings in September 1999. Compact discs of the recordings were made available to the public from the courts' clerk's offices, for a $26 fee.

The PACER system also offers an instructional video -- featuring a talking gavel -- on how to access the audio files in the PACER system.

At the appellate level, most of the federal Courts of Appeals offer audio recordings of their oral arguments on their websites, outside of PACER (1st; 3rd; 4th; 5th; 6th; 7th; 8th; 9th; D.C.; Fed.). Even the U.S. Supreme Court -- which has stubbornly resisted audio-visual coverage, despite pressure and a recent breach of this protocol -- posts audio of arguments to its website at the end of each week (while releasing transcripts of all cases and audio of a few prominent cases on the same day they are argued).

It's interesting that while the number of bankruptcy courts offering recordings has continued to grow, the number of federal trial courts offering the recordings has not increased significantly beyond the three that were in the program at its inception. Of course, trial courts are more likely than bankruptcy courts to have proceedings of interest to the press and the general public.

The audio recordings in the federal trial and bankruptcy courts are part of a larger debate over the merits of human court reporters. But as a court access issue, the easy and inexpensive availability of audio recordings of court proceedings is an important development, which hopefully more courts will embrace.