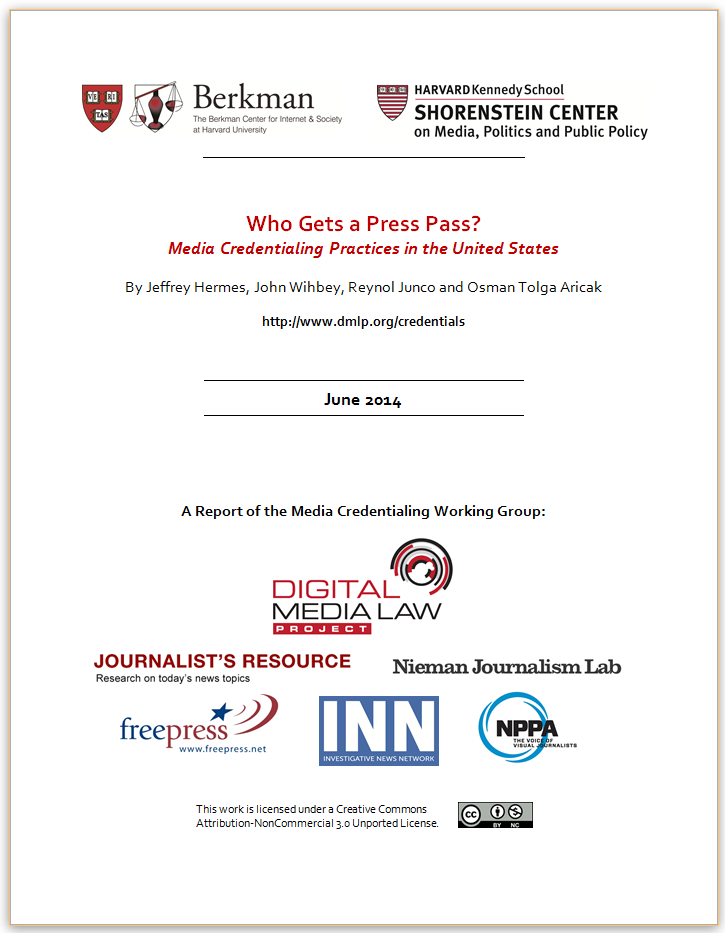 The Digital Media Law Project at Harvard University's Berkman Center for Internet & Society and the Journalist's Resource project at Harvard's Shorenstein Center on Media, Politics and Public Policy are pleased to release a new report: Who Gets a Press Pass? Media Credentialing Practices in the United States.

Media credentials have long played a critical role in newsgathering in the United States, allowing journalists to gain special access to places and events denied to the general public. There are, however, many inconsistencies among regulatory standards for the issuance of credentials, and many circumstances where the decision of whether and how to issue credentials is left up to individual agencies with no regulatory guidance at all. Moreover, upheaval in the journalism industry has introduced new actors in the journalism ecosystem, complicating decisions by government agencies and private gatekeepers about who should be entitled to special access.

Who Gets a Press Pass? presents a first-of-its-kind analysis of this complex environment, exploring media credentialing practices in the United States through a nationwide survey of more than 1,300 newsgatherers.

"Media credentials represent one of the most important interactions between journalists and those who control access to events and information," said Jeff Hermes, director of the Digital Media Law Project and lead author of the report. "This study finds common threads that run through decisions by various types of organizations, as a starting point to make sense out of the vast array of credentialing practices in the United States."

Survey respondents included a wide range of journalists across the country, from employed journalists at long-standing media organizations to independent bloggers and activists fulfilling the information needs of their communities.

"The findings here speak to the vital issue of ensuring that journalists of all kinds can bear witness to important events in our society," said Shorenstein Center Director Alex S. Jones. "The ability of the press to operate freely, robustly and without interference is essential to an informed public. We must be vigilant in making sure that all organizations issuing press credentials exert the maximum effort to accommodate media members and enable the free flow of information."

The survey asked about respondents' experiences in seeking press credentials from federal, state, local, and private organizations from 2008 through 2013, revealing the following nationwide trends:

Who Gets a Press Pass? is a report of the Media Credentialing Working Group, a collaboration of six non-profit organizations with a common interest in the ability of journalists and photographers to inform the public about important events: the Digital Media Law Project, Journalist's Resource, the National Press Photographers Association, Free Press, the Investigative News Network, and the Nieman Journalism Lab. It is the hope of the Working Group that this study will help newsgatherers to identify particular tensions in media credentialing practices and to work with credentialing agencies to resolve these tensions.

The report is available here. Press inquiries may be directed to the Digital Media Law Project here, and to Journalist's Resource here.