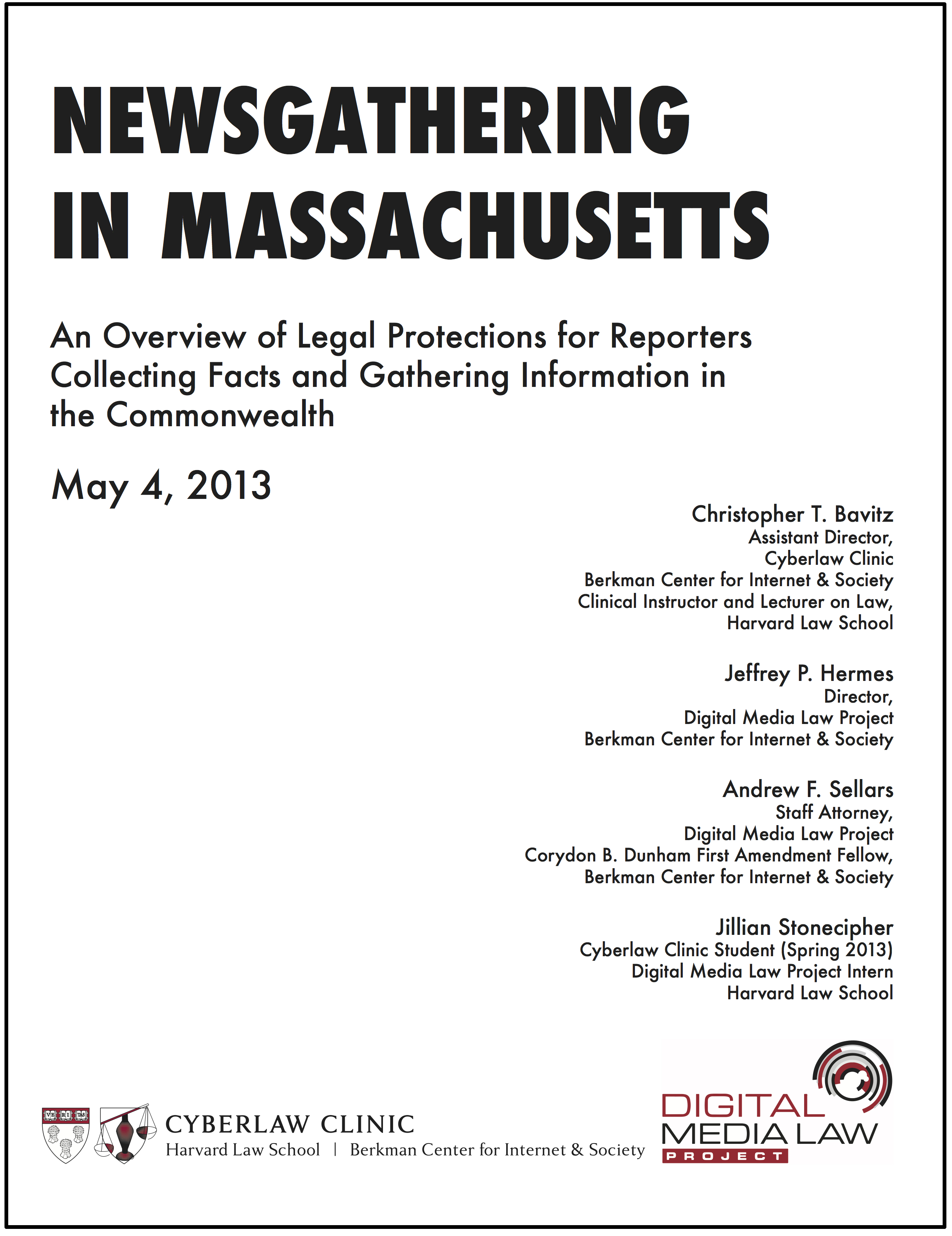 The Digital Media Law Project is pleased to announce the online release of its new legal resource, Newsgathering in Massachusetts, co-produced with the Harvard Law School

This page hosts the our Guide to Reporting at the 2012 Republican and Democratic National Conventions, and related resources

More than ten thousand journalists are expected to attend the Republican and Democratic National Conventions in Tampa and Charlotte in the late summer of 2012. A complicated array of laws will be enforced at these events by federal officers, state and local law enforcement, and private security. This Guide is intended to provide detailed information about how the law will apply to those trying to gather news at the events surrounding the conventions. 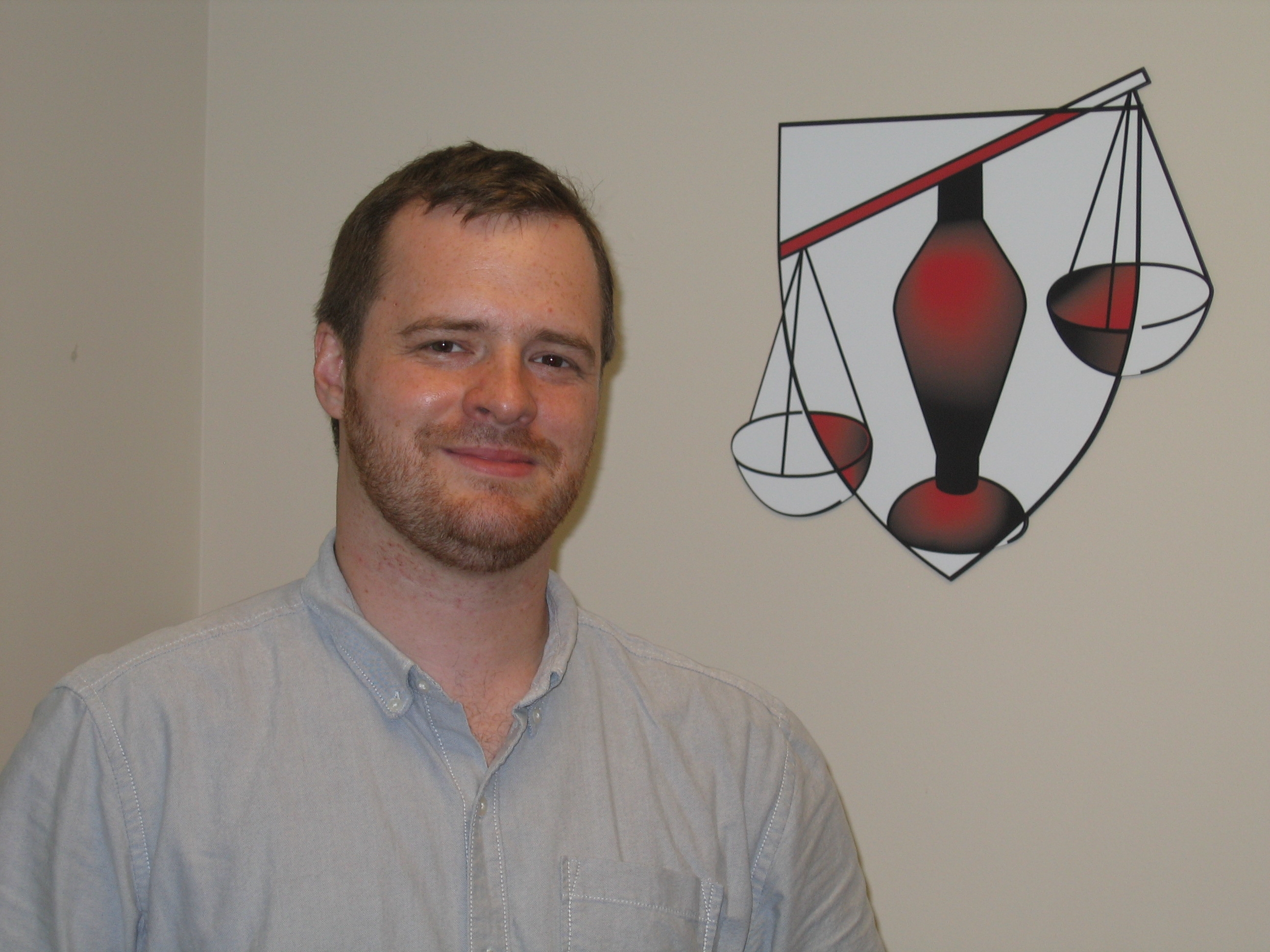 This Thursday, August 16, and again next Thursday, August 23, the Digital Media Law Project's own Andy Sellars will be joining Free Press and the International News Safety Institute to host live online sessions on reporting in conflict ar 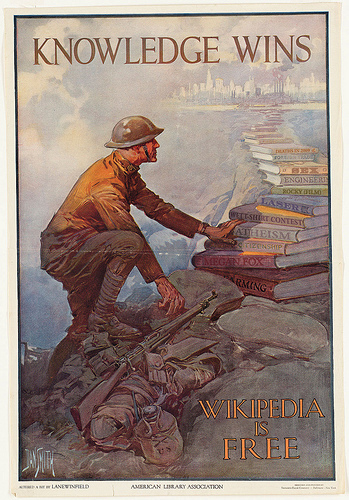 For a time, few issues could rally nerds as effectively as net neutrality.

This weekend, the Boston Globe published a thoughtful op-ed by Robert Ambrogi on efforts to reform the Massachusetts open meetings law. Ambrogi points out that the current open meetings law does not provide for civil or criminal penalties against government officials who violate the law.

This is the fifth in a series of posts calling attention to some of the topics covered in the Citizen Media Legal Guide we began publishing in January. This past month we rolled out the sections on Newsgathering and Privacy, which address the legal and practical issues you may encounter as you gather documents, take photographs or video, and collect other information.

As an avid baseball fan, I should have been paying closer attention to the recent dispute over Major League Baseball's new restrictions on credentialing journalists who cover MLB games. A nice summary of the dispute on the Reporters Committee for Freedom of the Press' Sidebar Blog awoke me from my slumber.

While you can't always eliminate your legal risks when entering the property of others, there are a number of ways you can minimize your risk of liability. Some suggestions include:

If you enter private property without the owner's permission or enter portions of public property that are off limits to the public, you could be liable for civil or criminal trespass. For example, you may not walk into your neighbor's house uninvited, sneak into your congressperson's office, or pretend to be a public official to gain access to someone else's property.

You may wish to access another's private property in order to gatherinformation to publish online. However, while there are (rare)circumstances in which the law will condone your entry onto privateproperty without permission, in general you do not have any right to enter the private property of others without their consent. You should read this section in conjunction with the section on Trespass in order to understand the issue of consent.

The Associated Press is reporting that New Hampshire will no longer issue identification cards to journalists. According to a report in Seacoastonline:

Brian Bennett, a blogger and reporter for the Louisville Courier-Journal newspaper, had his media credentials revoked for blogging during a live NCAA baseball final game. The NCAA said that Bennett was in violation of its policy banning live internet updates during champtionship games.

A few days after the controversy, the NCAA said that it had given "incorrect information" to Bennett. The NCAA clarified its proper position, saying that live updates from NCAA events are permitted as long as the updates only include scores and time remaining.

The Courier-Journal reported that originally considered suing the NCAA for infringing upon Bennett's First Amendment rights, but it appears that the newspaper will not take any legal action.

Status checked on 6/5/2008, no new information.  The NCAA has updated its rules on blogging since the incident, however.  (AAB)

In June we reported that the New York Mayor's Office of Film, Theater and Broadcasting was considering new rules that would require any group of 2 or more people who want to use a camera on city property -- including sidewalks -- for more than a half hour to get a city permit and $1 million in liability insurance.

Not surprisingly, the new rules were roundly criticized from the start. The New York Civil Liberties Union, which said the rules encroached on First Amendment rights, threatened to file a lawsuit to invalidate them. One of the more interesting approaches was taken by Olde English, a comedy group based in New York City that created a rap video lampooning the new rules and directing viewers to contact the Office of Film to express their dissent. (Don't miss the video, it's great.)

The city has now backed down, following a strong public outcry by photographers and independent filmmakers. NY1 News reports:

The Mayor's Office of Film, Television, Theater and Broadcasting said Friday that it will re-evaluate its set of proposed rules that would have required permits and as much as a million dollars in insurance for small, independent productions. The announcement comes at the end of a 60-day public comment period on the policies. The organization Picture New York gathered a petition with 31,000 signatures opposing the rules.

According to NY1 News, the Office of Film says it will take the public's comments into account in the next draft of the rules.

The NFL just doesn't know when to stop. The Washington Post reports on a new NFL policy limiting journalists' use of video online:

In a move designed to protect the Internet operations of its 32 teams, the pro football league has told news organizations that it will no longer permit them to carry unlimited online video clips of players, coaches or other officials, including video that the news organizations gather themselves on a team's premises. News organizations can post no more than 45 seconds per day of video shot at a team's facilities, including news conferences, interviews and practice-field reports.

Now this policy isn't copyright-based -- the NFL doesn't have copyright in the un-fixed statements of its players and coaches -- but good old real property law. The NFL teams own their facilities, and with them have the right to exclude people physically, as trespassers. So the NFL is telling sportswriters, who depend on physical access to gather the background for their stories, they'll be barred at the gates if they use more than 45 seconds of video online.

The New York Mayor's Office of Film, Theater and Broadcasting is considering new rules that would require any group of 2 or more people who want to use a camera on city property -- including sidewalks -- for more than a half hour to get a city permit and $1 million in liability insurance, the New York Times reports today: