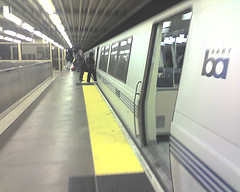 In its Aug. 20 letter, BART officials distinguished a train platform from a traditional public forum, such as a park or sidewalk. “BART has designated the areas of its stations that are accessible to the general public without the purchase of tickets as unpaid areas that are open for expressive activity upon issuance of a permit subject to BART’s rules,” they wrote. If this distinction is made, BART can legally restrict all speech on train platforms so long as their policies are view-point neutral. If the distinction is not made, however, any policy they enact to limit speech will be judged using far more rigorous constitutional tests.

Public fora, such as parks and sidewalks, have “immemorially been held in trust for the use of the public and, time out of mind, have been used for purposes of assembly, communicating thoughts between citizens, and discussing public questions.” Hague v. Comm. for Indust. Org., 307 U.S. 496, 515 (1939). The First Amendment right to use such areas, however, is not absolute and under certain circumstances the state may regulate the speech that occurs there. If government seeks to regulate speech based on its content, it must show that the regulation at issue “is necessary to serve a compelling state interest and that it is narrowly drawn to achieve that end.” Perry Educ. Ass’n. v. Perry Local Educations’ Ass’n, 460 U.S. 37, 45 (1983).

If the train stations are to be considered a public forum, the next question is whether or not the cell phone restriction is based on content. Wrote Volokh:

As explained, a content-based restriction must serve a compelling state interest and be narrowly drawn. Public safety is almost always considered a compelling state interest. The breadth of the restriction, however, is a trickier question to answer. “The question here was, was shutting off cell phone service and Wi-Fi service the appropriate way?,” Policinski said. “Could they have simply closed stations or limited the number of people?”

If the restrictions are content-neutral, the state has more authority. It can regulate the time, place and manner of speech so long as those restrictions are “narrowly tailored to serve a significant government interest and leave open ample alternative channels of communication.” Perry Educ. Ass’n., 460 U.S. 37 at 45. BART claimed such alternative channels existed: The “temporary interruption of cell phone service was not intended to and did not affect any First Amendment rights of any person to protest in a lawful manner in areas at BART stations that are open for expressive activity. The interruption did prevent the planned coordination of illegal activity on the BART platforms, and the resulting threat to public safety.”

But it also prevented the planned coordination of legal activity, noted Policinski. “What was the alternative here for people who wished to do nothing more than protest BART’s actions in this shooting that took place about a month ago?” he asked. “Shutting down that cell phone service both shut off those alternative means of communication and as well as my ability to call home for an emergency....”

If the train stations are considered non-public fora, BART wields far more power to restrict speech. Public facilities can fall outside traditional public forum status if they were created for purposes other than expressive activities. An airport terminal, for example, is a non-public forum because it is “among those publicly owned facilities that could be closed to all except those who have legitimate business there.” United States v. Grace, 461 U.S. 171, 178 (1983); Int. Society for Krishna Consciousness v. Lee, 505 U.S. 672 (1992). If a certain location is deemed to be a non-public forum, the government can discriminate between speakers and messages, so long as the regulations are view-point neutral. Adderley v. Florida, 385 U.S. 39 (1966).

Because the BART stations are government-owned and created for transportation purposes, they likely fall into this category. The nature of these locations seems more aligned with an airport terminal than a town square. Although the restriction may be content-based because it intended to suppress discussion about protesting, it did not distinguish between different opinions on the protest. When addressing a non-public forum, “the government has a good deal of authority to impose content-based but viewpoint-neutral and reasonable restrictions,” Volokh wrote. “And the restriction here did seem to be both viewpoint-neutral and reasonable.”

Still, cell phone use is normally permitted and as the ACLU of Northern California wrote: “While the government has no obligation to build a public park, once it does so, it cannot shut the park gates to speakers with whom it disagrees.” In other words, as soon as a venue opens its doors to public speech, those doors cannot be closed.

“While BART is not under any obligation to provide cell phone service, either in trains or on platforms, they did make it available, and the fact that they took it away specifically to prevent a protest is highly disturbing.”